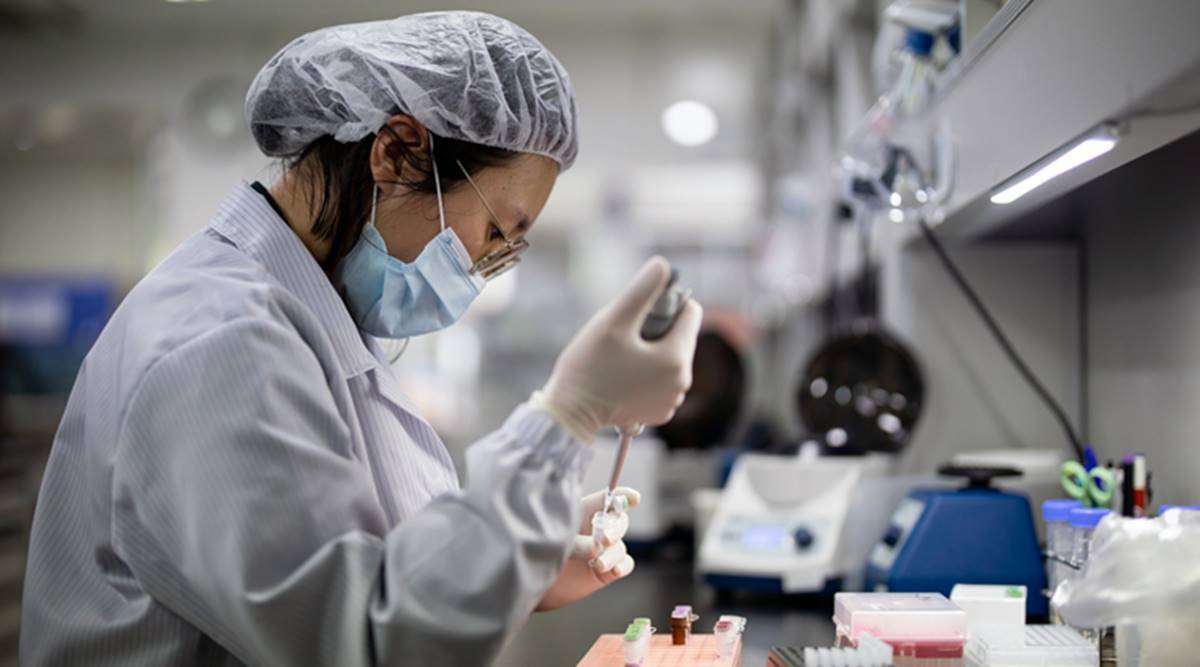 
According to the scientists, including those from Osaka University in Japan, the work may lead to fast and accurate screening tests for diseases like COVID-19 and influenza. (Representational Image)

Scientists have developed a new method for identifying single virus particles based on changes in electrical current when they pass through ultrasmall pores. This advancement may lead to new rapid COVID-19 tests, the scientists claim. The study, published in the journal ACS Sensors, demonstrated a new system for identifying single virus particles using an algorithm trained to detect changes in the current passing across silicon nanopores.

According to scientists, including those from Osaka University in Japan, the work may lead to fast and accurate screening tests for COVID-19 and influenza. In the new method, a layer of the compound silicon nitride, just 50 nanometres (nm) thick, has tiny nanopores added on it.

The layer is suspended on a silicon wafer, they said, adding that when a voltage difference is applied to the solution on either side of the wafer, ions travel through the nanopores in a process called electrophoresis.

According to the study, the motion of the ions can be monitored by the current they generate and when a viral particle enters a nanopore it blocks some of the ions from passing through, leading to a transient dip in the current. Each dip reflects the physical properties of the particle, such as volume, surface charge, and shape, the scientists said. They say this measure can be used to identify the type of the virus.

The scientists said the computer can discriminate the differences in electrical current waveforms that cannot be identified by human eyes, which enables highly accurate virus classification.

In addition to coronavirus, they said the system was tested with pathogens such as adenovirus, influenza A, and influenza B. “By combining single-particle nanopore sensing with AI, we were able to achieve highly accurate identification of multiple viral species,” the study’s senior author Makusu Tsutsui from Osaka University explained.

RELATED:  COVID-19 containment zones in Tamil Nadu as on Dec 19
RELATED:  Storm dumps snow and ice on East Coast, shutting schools and virus testing in US

The researchers believe coronaviruses are especially well suited for this technique since their spiky outer proteins may even allow different strains to be classified separately. “This work will help with the development of a virus test kit that outperforms conventional viral inspection methods,” said Tomoji Kawai, another co-author of the study.

Compared with other rapid tests like PCR or antibody-based screens, the researchers said the new method is much faster and does not require costly reagents. They believe the new technique may lead to improved diagnostic tests for emerging viruses that cause infectious diseases such as COVID-19.

Millions of people in the US started buying face masks...
Read more

Mohit Malik has been on cloud nine ever since he announced that...
Read more

UK Covid-19 variant could be dominant US strain by March: CDC

In the report issued on Friday, the CDC said new variant, which...
Read more

The best Samsung Galaxy S21 alternatives: 6 phones to consider before you buy