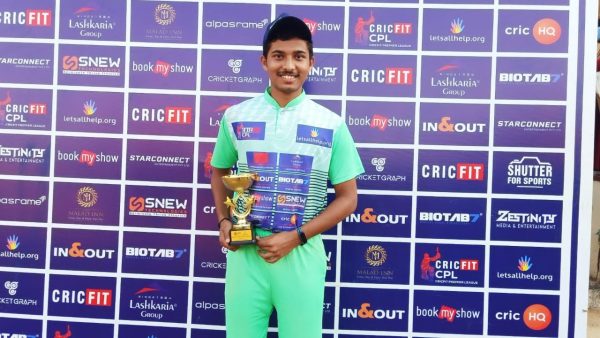 The inaugural edition of Cricket Premier League (CPL) has reached its business end as Swami Vivekananda International School locked horns with KRP Cricket Academy in a U-16 game at the Thakur Village Cricket Stadium in Kandivali East. Swami Vivekananda banked on a thorough bowling effort to seal the tie by eight wickets.

Lakshya Jhawar and Viraj Mahale scored 12 runs each but once they got out it was all over for them. Advait Lotlikar returned with three wickets while Rudra Tank and Aarya Deshpande scalped two-wickets each to bowl out KRP Cricket Academy for 51 runs in 17.2 overs.

Although it looked like a cakewalk for Swami Vivekananda International School at the halfway mark, but KRP Cricket Academy struck twice within two overs to unsettle the chasing side. Opener Sahas Shetty was sent back for a duck while Ayush Aadhya removed Suraj Sanki for three to have Swami Vivekananda at 10 for two.

Although it looked like the game will have some more exciting turn of events but Amit Jaiswal and Nihansh Poojary took Swami Vivekananda home without any more hiccups. Amit remained unbeaten on 22 runs off 20 balls including three fours while Poojary chipped in with 13 runs to seal a crucial win for their side.

X
Watch – Vishnu Solanki Does A MS Dhoni To Take Baroda To Semifinal…CricketBaroda beat Haryana in a thrilling encounter to enter into the semifinals of the ongoing Syed Mushtaq Ali Trophy. Vishnu Solanki was the hero for Baro…
close