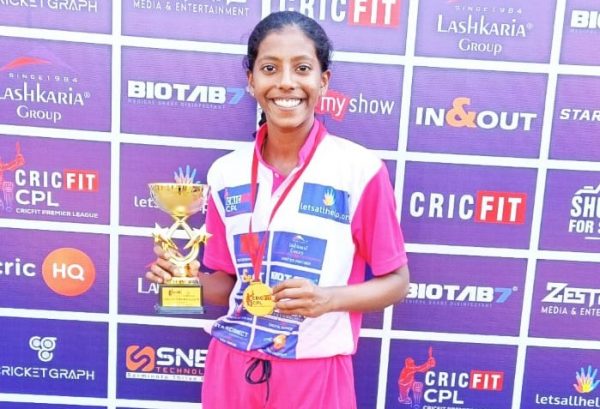 The second day of the inaugural edition of the Cricfit Premier League ( CPL ) was a low scoring thriller between the U19 Girls contingent as Bhosale Cricket Academy went up against Kamath Memorial Cricket Club at the Thakur Cricket Stadium In Kandivali, Mumbai. Starting with the toss, the Bhosale Cricket Academy won the toss and elected to bat first.

The opening batsman of the Bhosale Cricket Academy, Sanika Chalke scored an unbeaten knock of 61 deliveries off 65 deliveries as the Kamath Memorial Cricket Club bowlers did a terrific job to restrict them just under 100 at the end of 20 overs. She lacked partners at the other end before taking the onus on herself.

In return, Kamath Memorial Cricket Club had an edgy start in the chase of a target of 100 runs as they lost 3 early wickets in the powerplay giving Bhosale Cricket Academy the early advantage. But then came the patient knock of Sharvi Save who scored 36 off 35 deliveries in a crucial partnership with Shraddha Shetty which put them ahead at the halfway mark of 10 overs.

With hardly 30 runs required off the last 10 overs, it was Ketki Dhure who remained unbeaten on 11 runs to help Kamath Memorial Cricket Club jump across the target of 100 runs. Nirmiti Rane was adjudged the woman of the match award for her economical spell with the new ball.