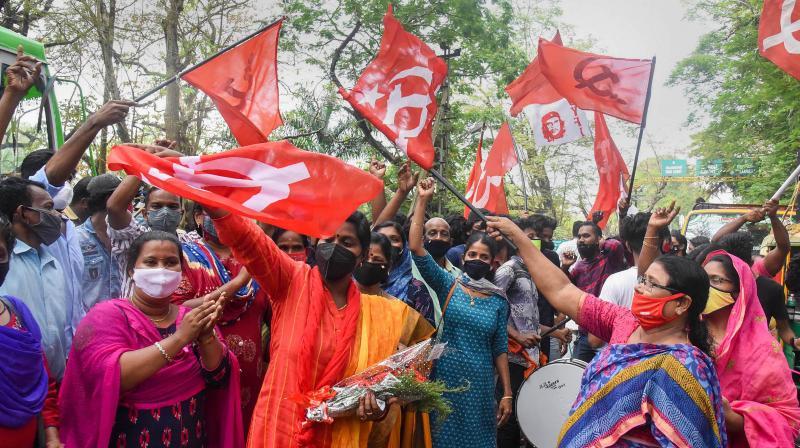 Thiruvananthapuram: The CPM led ruling Left Democratic Front in Kerala on Wednesday registered a significant victory in local body polls considered as the semifinals ahead of crucial Assembly polls next year.

Chief Minister Pinarayi Vijayan termed the success of the ruling front as “people’s victory.” “It’s a befitting reply from the people of Kerala to the forces who tried to destroy our achievements, central agencies which worked with ulterior motive, communal forces which wanted to weaken the unity of the people  and the forces which unleashed lies against the government,” he said.

The chief minister said the people irrespective of caste, creed, religion, region extended wholehearted support to LDF. “The mandate reflects the secular mindset of the people of the state,” he said.

For the LDF, the victory is vital as it comes in the backdrop of serious allegations related to gold smuggling, corruption in mega projects faced by the government and chief minister’s office. Almost all central agencies including CBI, ED, Customs, NIA are camping in the state in connection with the investigations into various cases forcing even chief minister Pinarayi Vijayan to accuse the BJP led Government at the Centre of misusing these agencies to derail the pro- people projects and topple democratically elected state government.

Despite facing such an adverse political situation, the LDF managed to keep its rural base almost intact winning 514 grama panchayats. The UDF which was expected to do better this time, ended up with 377 grama panchayats. However, the UDF maintained its upper hand in municipalities winning 45 of the 86.  The LDF won 35 while BJP added one more to its 2015 tally.

Of the six corporations, the LDF recorded a clear victory in Thiruvananthapuram, Kozhikode and Kollam while Kannur went with UDF. In Thrissur and Kochi the LDF has a slender margin of three and one seat respectively. The decision of victorious independent candidates would be decisive in these corporations.

The UDF, however, faced a major setback in district panchayats elections which are considered more political in nature. Of the 14 districts, LDF won 10 and UDF ended up with just four.

In block panchayats, the LDF was way ahead winning 108 compared to UDF’s 44.

The LDF retained the prestigious Thiruvananthapuram Corporation winning 52 of the 100 wards. The BJP which had set the target of capturing the corporation this time, managed to win 35 seats.

LDF convenor and acting CPM state secretary A Vijayaraghavan attributed the victory to the pro-poor policies, effective handling by government of back to back floods and Covid pandemic. The negative campaign targeting the government, chief minister and the unholy nexus between UDF-BJP and fundamentalist organizations were rejected by the electorate, he added.

“Never before had such a vitriolic campaign had been witnessed in the state. But people stood strongly with secular, left democratic forces and ratified the good governance,” he said.

Opposition leader Ramesh Chennithala claimed that the UDF had improved its performance compared to 2015. “LDF cannot claim a big victory as its tally in grama panchayats and municipalities has gone down,” he said.

The Congress leader admitted that the corruption cases against LDF government, gold smuggling and involvement of officials of CMO had not reflected in the people’s mandate. “Local body elections are mainly held on local issues. People tend to vote on local issues, interpersonal relations and the candidate’s profile,” he said and added that the opposition campaign against corruption, gold smuggling and money laundering will continue.

He said the BJP which was making tall claims of being the main opposition could manage to win only in some pockets. Despite all the resources and backing of the central government, the BJP failed to make any major impact.

BJP state president K Surendran said the CPM and Congress joined hands in defeating BJP in places where the party had high prospects of winning. He alleged that this was evident in the Thiruvannathapuram corporation where the Congress votes were shifted enmass to the LDF. “We have won more grama panchayats, municipalities compared to 2015. Had it not been for the unholy alliance between CPM and Congress, we would have won in many local bodies,” he claimed.