They account for a little more than 8 per cent of India’s population, some 100 million people belonging to 700-odd communities across the country, but the designated Scheduled Tribes (STs) have borne the brunt of modern civilisation bearing down on them. Tribals constitute 40 per cent of all displaced people in the country, says an IIPA (Indian Institute of Public Administration) paper.

In the past three decades, the Union government has enacted two key legislations: the Panchayats (Extension to Scheduled Areas) Act or PESA, 1996, and the Forest Rights Act (FRA), 2006, to address the issues affecting ST communities. The PESA Act envisages a greater role for gram sabhas or the local community in deciding issues such as mining, land acquisition and dispute resolution.

However, the Act has not been able to meet its objectives largely because states have refused to implement them. ‘The implementation of these laws (PESA and FRA) has been sputtering An exercise to bring rules made by state governments in conformity with PESA needs to be undertaken,’ says a tribal affairs ministry report on the socio-economic, health and education status of tribal communities, formulated by the committee chaired by sociologist Virginius Xaxa.

As far as the FRA is concerned, there has been resistance in granting of pattas or certificates. The Union tribal affairs ministry says that as on January 31, 2020, a total of 4.2 million claims were made under FRA across the country, of which 1.98 million were accepted.

Affirmative action has helped STs make strides in central government employment; they made up 5.9 per cent of Group A personnel and 6.75 per cent in Group B by 2014. Health is a major concern, with tribal communities reporting higher numbers in IMR (Infant Mortality Rate), MMR (Maternal Mortality Rate) and neonatal deaths compared to the rest of the population. Among children below five years of age, the incidence of stunting among STs is 43.8 per cent, as per the NFHS-IV survey. 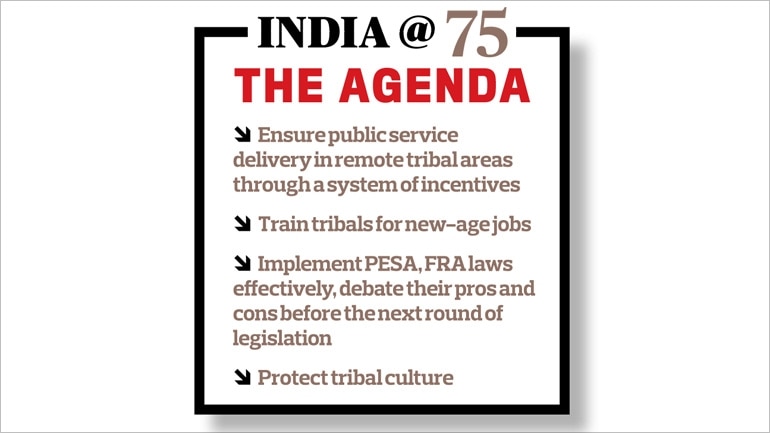 An intangible issue affecting tribals is the loss of their culture. There are constant attempts to homogenise the community, and it has also been at the receiving end of competitive proselytising by various groups. On the education front, literacy, which stood at 8.5 per cent in 1961, was up to 59 per cent by 2011, but the dropout rate was worrying (71 per cent for class I to IX).

On the economic front, indebtedness among STs remains an issue, but there are positive outcomes in entrepreneurship. The number of ST-owned enterprises stood at 2,084,000 in 2006-07 (4th MSME Census), a 300 per cent jump from 2001. “The loss of cultural identity, coupled with the community’s inability to keep pace with modern economic life is a cause for concern. Governments increasingly understand that a cookie-cutter approach vis-a-vis tribals will not work. Changes are being made,” says Pallavi Jain Govil, principal secretary, tribal welfare, Madhya Pradesh.