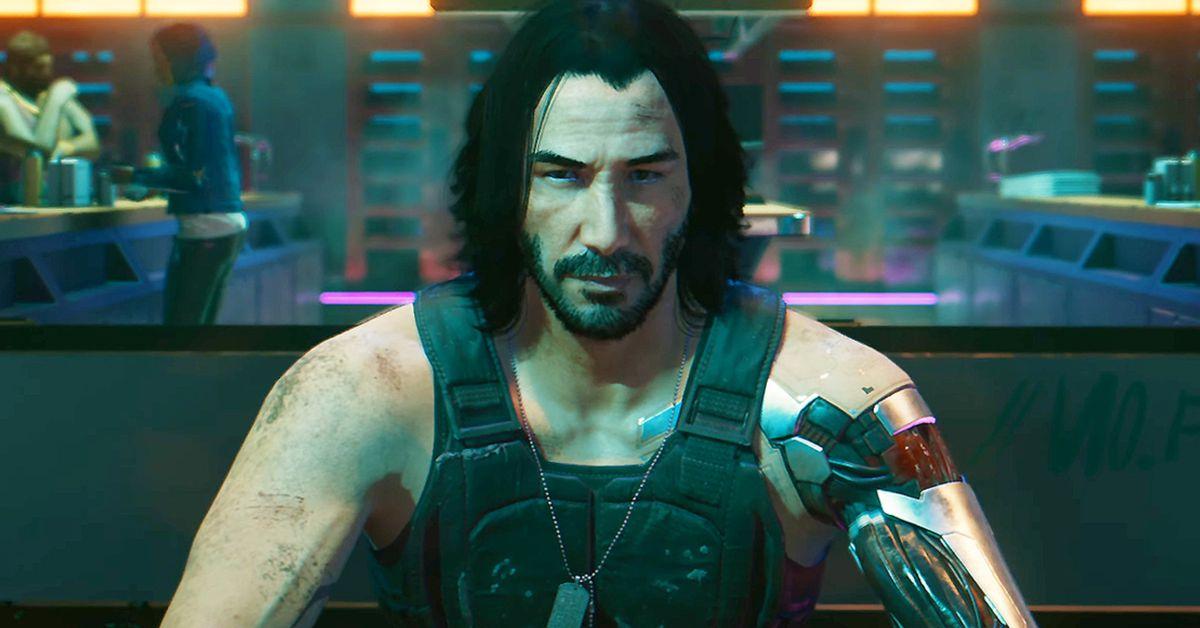 It’s rare that anything lives up to its hype. And yet the often astronomically high expectations that consumers set still persist, and sometimes even appear warranted. That seemed to be the case with Cyberpunk 2077, a video game released on PlayStation 4, Xbox One, and Windows PC on December 10 after many years of buildup.

Inspired by a cult-favorite tabletop role-playing game, Cyberpunk 2077 seemed tailor-made for success. It’s the first new console game from Polish studio CD Projekt Red since The Witcher 3: Wild Hunt, a massively successful game that won numerous awards and end-of-year accolades after its 2015 launch. Cyberpunk 2077 stars Keanu Reeves in a major role that bears his likeness as an on-the-run rocker-turned-military-veteran-turned-cybernetic terrorist. The game’s heaps of trailers and previews and marketing materials seemed to promise a slinky, sexy, neon-tinged world of futuristic action — catnip for many gamers craving escapism.

But these surefire bets were not so surefire after all. Cyberpunk 2077 has, since its release, been roundly criticized across the gaming community by consumers, game designers, and industry insiders alike. An already toxic fanbase has bounced from harassing reviewers who offered tepid praise to roasting the company for the game’s many problems. Initially positive reviews have added caveats as more time with the game reveals more loose threads. To many observers in and outside of the gaming world, Cyberpunk 2077 has proven to be a stunning failure: a video game with such promise and ballyhoo that it did not, and perhaps could never, live up to.

The story of Cyberpunk 2077’s botched release and ongoing controversy is one that illuminates several problems within the world of video games. Developer CD Projekt Red — Europe’s most successful video game company — first announced that it was working on the project in 2012. It was a tantalizing announcement: The game would draw on a popular tabletop RPG released in the late 1980s, Cyberpunk, and a teaser released in 2013 showed that the developer had translated that world into an appealingly gritty cybernetic environment. It would be an expansive world, developers teased, aesthetically akin to the dystopian environs of Mad Max: Fury Road and Akira.

Cyberpunk 2077 is the story of a California city set in an alternate timeline, where a handful of megalomaniac corporations own the streets, everyone modifies their body with illegal tech, and much of the state is still reeling from a major nuclear attack years prior. You, the player, get to be a particularly badass cyber-enhanced human, fighting against psychological and physical threats to your survival. (This is where Keanu Reeves, as your begrudging sidekick, comes in; his involvement was revealed in 2019 to resounding cheers.)

Although no release date was in sight at the time of its 2013 teaser, excitement only grew after The Witcher 3: Wild Hunt launched in 2015 to overwhelming praise. Its popularity helped increase hype for Cyberpunk 2077, already a game that many fans of the original property were champing at the bit for. And with work on The Witcher 3 winding down, the developer was committed to seeing Cyberpunk 2077 through.

Thus began a lengthy period of pre-release hype. CD Projekt Red taunted fans with a glimpse of the game in 2018, five years after that initial teaser appeared.

At the game’s 2018 showing, held at the industry trade show Electronic Entertainment Expo (E3), journalists pumped it up based on early, closed-door impressions. The developer gained positive attention for insisting that its game would not include some of the most common, most maligned features of other big adventure games at the time. CD Projekt Red would not lock any game content behind a paywall, it said. Anything added to the game after launch would be available for free. And the game would only come out when it was “ready.”

“We do realize you’ve been impatiently waiting for a very long time, and we wouldn’t like anyone to feel that we’re taking this for granted,” the developer wrote after the game’s E3 2018 presentation. “On the contrary — it gives us a lot of extra motivation. The hype is real, so the sweat and tears need to be real, too :)” That now feels like ominous foreshadowing.

The game, announced as an April 2020 release, was delayed several times due to the Covid-19 pandemic and, crucially, quality problems. Each rescheduled release date engendered more concern and pushback, in part because it called for more patience than many Cyberpunk fans were willing to dredge up.

And the company’s claims eventually proved untrue: Despite stating in 2019 that it would not require developers to work overtime to finish the game, CD Projekt Red entered a months-long crunch period, a labor issue that has gained more attention in gaming circles in recent years. Bloomberg reported in September that the studio had instituted six-day workweeks for the final development stretch; at that time, the game was set for a November release. A month later, in late October, Cyberpunk 2077 was delayed again until December.

Gaming fans have raised concerns about crunch as more and more developers speak out about it. Unionization efforts are mounting in the gaming industry. Advocating for fair labor practices is becoming important to games makers and the people who play them, and if developers have to crunch on a game, the prevailing attitude among those anticipating it is hope that the end product is at least as “worth it” as possible.

That was not the case for Cyberpunk 2077, it would seem. “Despite the months of crunch that went into developing the game, even though the company promised not to go that route, the game launched with several technical issues,” Jeff Ramos, who writes for Polygon, told me. “So many in fact, the company offered refunds to players disappointed with the end product. We have even gone as far as updating our review of the game discouraging readers from playing the game on consoles until the game gets improved.”

When the game’s first reviews came out just before its December 10 release, they were mostly positive. It turned out, however, that this was because reviewers were only given early access to the Windows PC version, the one best optimized and representative of the expansive, graphically intensive game’s potential. Once the game was released on consoles as well (PlayStation 4 and Xbox One), players discovered a litany of technical issues. Characters’ faces were obscured, some environments were unsightly. The game would make consoles crash repeatedly, sacrificing players’ progress. One glitch even exposed characters’ detailed penises and breasts, which would poke out of their clothes. The memes and mockery were relentless and swift.

Another issue arose out of lack of oversight: A feature of the game recreates the tests that doctors use to discern whether a patient has epilepsy but offers no epileptic seizure warnings in advance of their appearance. One games critic reported that she suffered grand mal seizures as a result; the developer has now added warnings.

When CD Projekt Red announced that it would offer full refunds for unhappy console buyers a week after release, people quickly discovered that this was a make-good in name only. Retailers redirected those seeking their money back to speak to the company, which only reiterated that it was up to retailers to make the refunds. On December 17, Sony announced that it would grant refunds to all owners of Cyberpunk 2077 on PlayStation 4 — as well as completely remove the game from sale on the digital PlayStation marketplace until it’s in a more functional state. That’s an unprecedented move from a console manufacturer, and a sign of how dire the situation is around Cyberpunk 2077’s release.

CD Projekt Red courted controversy even before Cyberpunk 2077’s rocky release period. The studio has made news in the past for posting transphobic material on social media, misappropriating queer-themed hashtags, and making jokes about gender identities. In 2019, when footage from the game showed a hypersexualized trans character on a billboard, the studio failed to offer a nuanced explanation as to its placement, raising eyebrows. (In the finished game, this ad appears on vending machines basically everywhere.)

Cyberpunk 2077’s extensive character creator is meant to allow players to become whoever they want with no regard to gender. But the company’s history has cast a shadow over those options and the game itself, especially when there are options to intricately customize a penis but no such attention paid to vaginas; transgender characters in the game are used for provocation and little more; and there are few characters of color, most of whom are presented stereotypically.

All of this has led to consumer rage of the highest order. It’s the kind of outrage that saw a (young, female) reviewer from one prominent gaming website face severe harassment for offering criticism of the game, which diehard fans maintained must be perfect after all of this time and struggle and crunch. Yet upon its release, they backtracked, redirecting their viciousness toward the studio itself.

The question remains: Would Cyberpunk 2077 have been subject to such intense debate had it not come saddled with the indulgent hype that it had enjoyed? Much of this is owed to its marketing, said Ramos, which portrayed the game as something different from what it actually is.

“Fans still got a steady feed of promotional videos detailing the game’s vast open world, the various inhabitants of Night City, and the promise of exciting combat we’d get to experience once the game was in hand,” Ramos said. “While I had assumed the game would cater more to the action-orientated themes that came across in the marketing, what I found after 40 hours of gameplay is that it plays more like its role-playing, tabletop roots.”

To some who, like Ramos, are able to play the game in a more functional capacity, this isn’t a bad thing. He’s enjoying the game for exactly the reason why many others aren’t: It’s not all posturing, stylized edge and murder under seedy neon lights. The game does spend time expanding upon its lore, fleshing out its characters and setting, and for some folks, the fashion and cultural references are a big success. Even if the story can be campy and the dialogue wooden, there is the potential for fun to be had.

“As a game about its characters, flawed as some of them are, that’s where Cyberpunk shines,” Ramos said. “Unclear marketing and bad bugs don’t affect those much.”

Cyberpunk 2077 will receive updates that the studio hopes will improve its performance so that console players will find it more workable. There will also be more playable content in the future, as the studio initially teased years ago, and there are versions in the works for the most recently released consoles, the PlayStation 5 and Xbox Series X, which should be tempting for owners of those currently hard-to-find systems.

Video games with such intense fanbases cultivated before their actual release often face an uphill battle. Many games in the past have undergone the same cycle of intense excitement and even stronger disappointment; with latent toxicity still alive in many corners of the gaming world, those situations have often featured severe online bullying at the expense of hardworking developers or dissenting reviewers.

Games that have survived that initial period of persistent hate are those that are refined over time, eventually finding new, loving, dedicated fanbases. Perhaps the same will be true for this video game — or perhaps all this baggage will weigh it down, leaving little but a cautionary tale in its wake. Maybe even Keanu Reeves won’t be enough to save this one.