Cyclone Nivar made landfall near Puducherry as a very severe cyclonic storm. The landfall that started from 11.30 pm. on Wednesday night lasted till 2.30 a.m. on Thursday.

The severe cyclonic storm Nivar now lay centered over north coastal Tamil Nadu, about 50 km northnorthwest of Puducherry. It still maintains a wind speed of 85 to 95 kmph as it moves to interior areas. It would move northwest wards and weaken further into a cyclonic storm during next three hours.

Parts of Tamil Nadu and Puducherry, including State capital Chennai, are seeing persistent rains and strong winds, resulting in property damage due to water-logging and fallen trees. Thousands of people have been evacutated to storm shelters across Tamil Nadu. Many districts in Tamil Nadu and the Union Territory of Puducherry have declared a holiday on November 26.

Commuters wading through water-logged streets in Puducherry on Thursday.

The District Administration in Puducherry has extended prohibitory orders imposed under Section 144 of CrPc till 6 p.m. on Thursday.

Earlier the plan was to have the restrictions in place till 6 a.m. on Thursday.

People who came out in large numbers without knowing about the extension of time were persuaded to return home by law enforcers.

Shops and commercial establishments were asked to down shutters till evening. 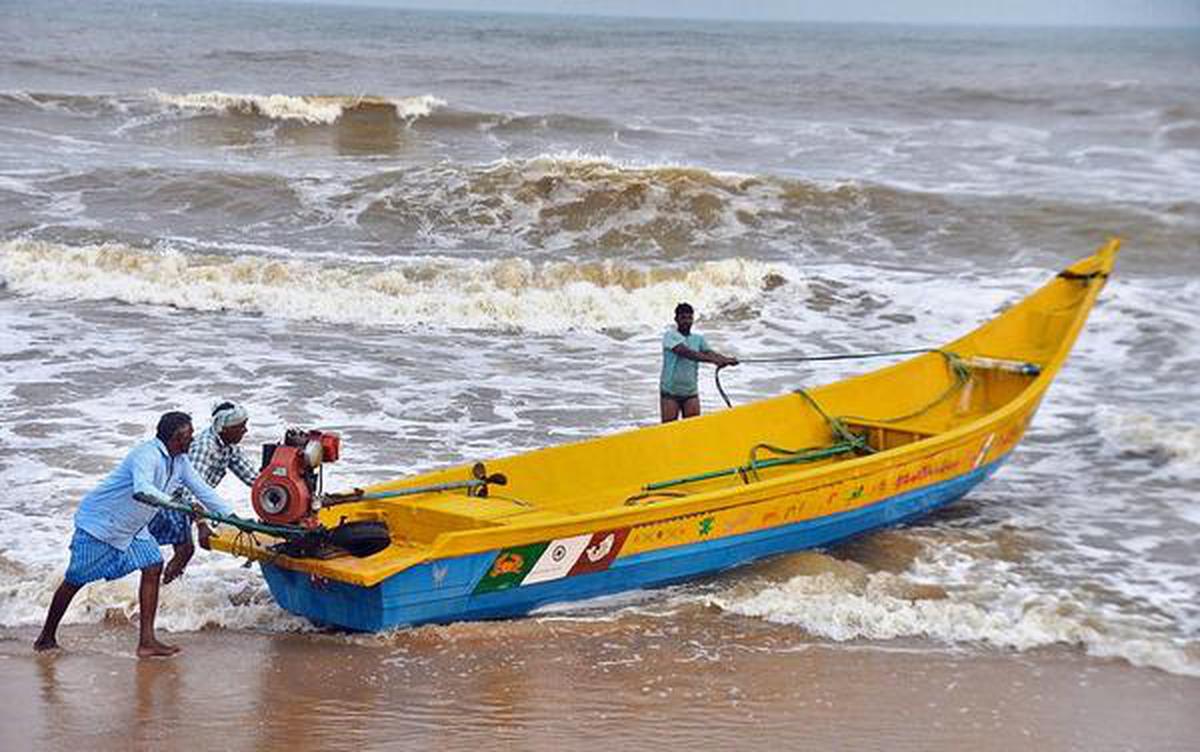 Fishermen move a boat to safety in the coastal village of Kothapatnam in Prakasam district on Wednesday.

Light to moderate rain or thundershowers is very likely to occur at most of the places in north coastal Andhra Pradesh and moderate rainfall is expected in south coastal and Rayalaseema districts on November 26, under the influence of cyclonic storm Nivar.

The sea condition is likely to remain rough off south Andhra Pradesh coast. Fishermen have been advised to suspend fishing operations and not to venture into sea. 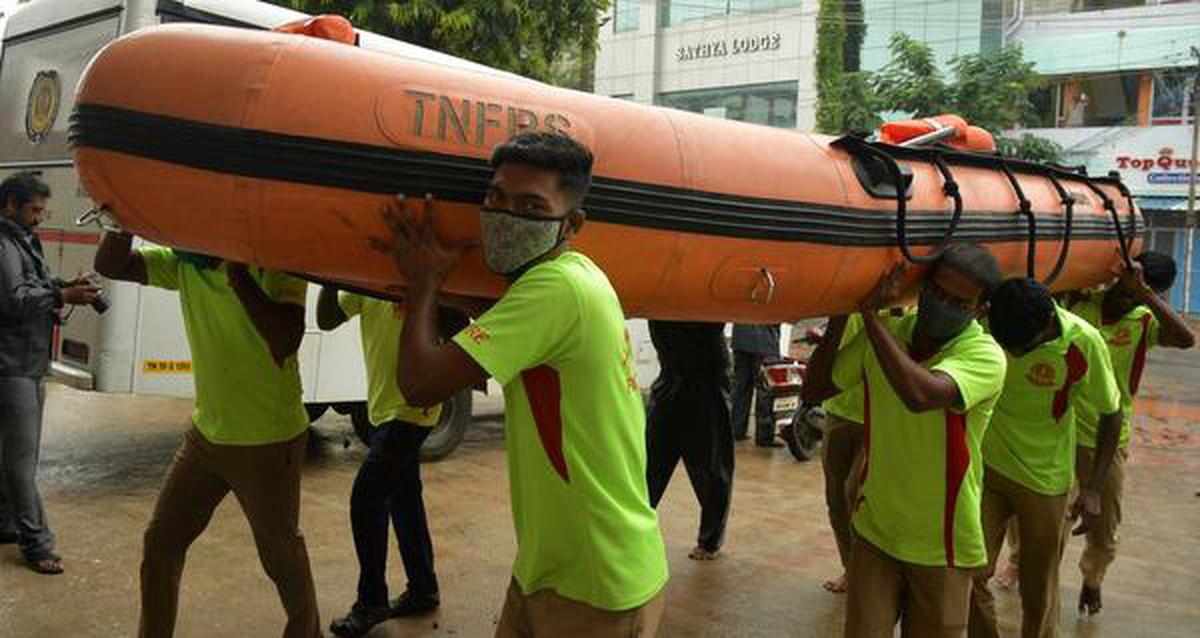 Tamil Nadu Fire and Rescue Services personnel leave for various parts of Nagapattinam district equipped with rafts and other emergency equipment on Wednesday.

People in the delta district, particularly fishermen along the coastal areas of the delta region, heaved a sigh of relief at the break of dawn on Thursday as Nivar cyclone that made a landfall in the intervening night was not as intense as feared.

There was no life loss reported so far, and damages to livestock and physical infrastructure were minimal.

Many spent a sleepless night as heavy rain lashed with strong winds all throughout when the cyclone made a landfall. No one was allowed to venture out of their homes particularly at the time of landfall spanning a few hours.

Many parts of the districts including Sirkazhi, Kollidam and Vaidheeswarran Kovil received more than 150 mm rainfall.

Power cables were snapped at least in five places in the district. Instances of uprooting of trees were reported at a few places along the Mayiladuthurai-Kollidam highway.

Kancheepuram collector Mageswari Ravikumar has announced that the water release from Chembarambakkam reservoir has been reduced considerably to 1,500 cusecs around 7.30 a.m. on Thursday as rains have receded. The sluices gates of RedHills reservoir may not be opened on Thursday as it may take another two days to reach the maximum water level, noted officials of Water Resources Department. 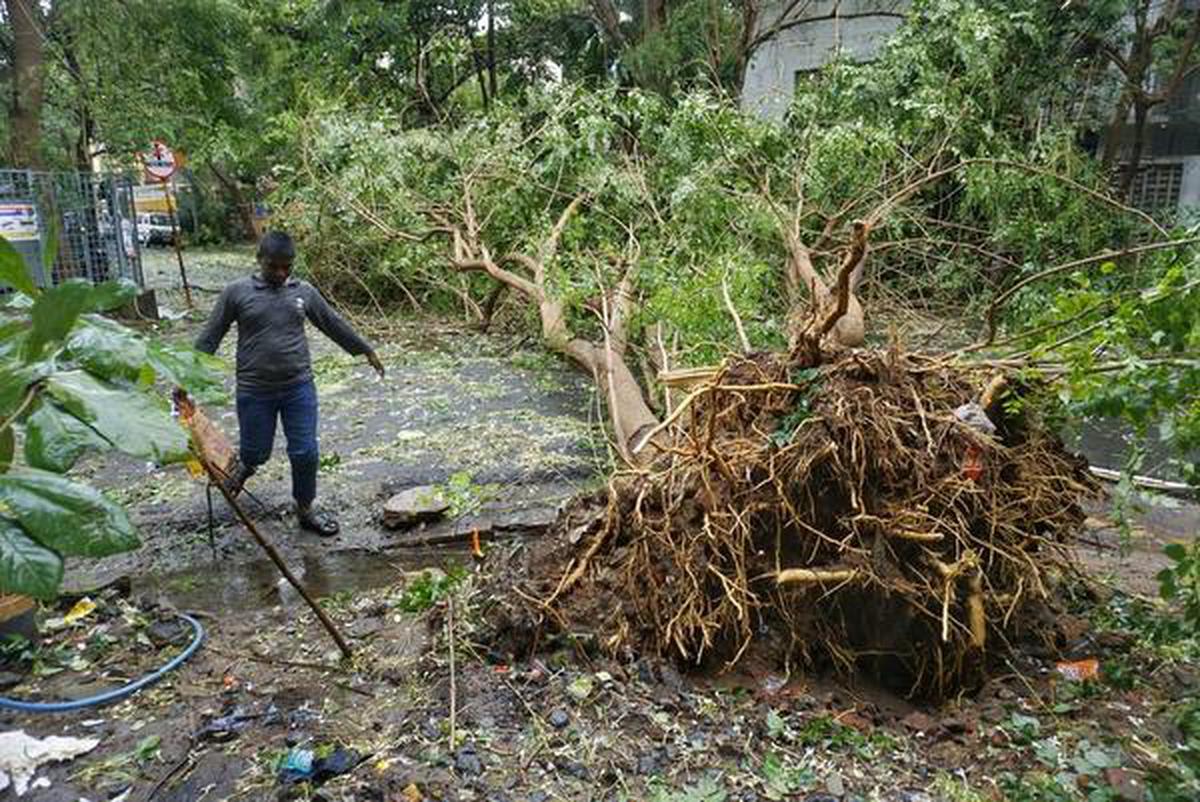 A huge tree was uprooted on Victor Simonel Street near the Puducherry Government Hospital in the aftermath of Cyclone Nivar, which made its landfall near Puducherry on Novemeber 25 night.

Cyclone Nivar made landfall near Puducherry, south of Chennai as a very severe cyclonic storm. The landfall that started from 11.30 pm. on Wednesday night lasted till 2.30 a.m. on Thursday.

In the process of landfall, it dumped extremely heavy rainfall in coastal areas. Puducherry received the highest of 30 cm rains followed by  Cuddalore 27 cm and Chidambaram 13 cm. Rains lashed many places in and around Chennai too. While Nungambakkam recorded 11 cm, Poonamallee and Taramani received 10 cm till 6.30 a.m. on Thursday.

The severe cyclonic storm Nivar now lay centered over north coastal Tamil Nadu, about 50 km northnorthwest of Puducherry. It still maintains a wind speed of 85 to 95 kmph as it moves to interior areas. It would move northwest wards and weaken further into a cyclonic storm during next three hours.

Places like Ambur, Tiruvannamalai, Vellore and Arani may experience squally winds with a speed of 50 kmph. In Chennai, rains may continue and winds will be strong for next six hours, according to the Meteorological Department.

Chennai airport to remain closed for operations till 9 a.m. 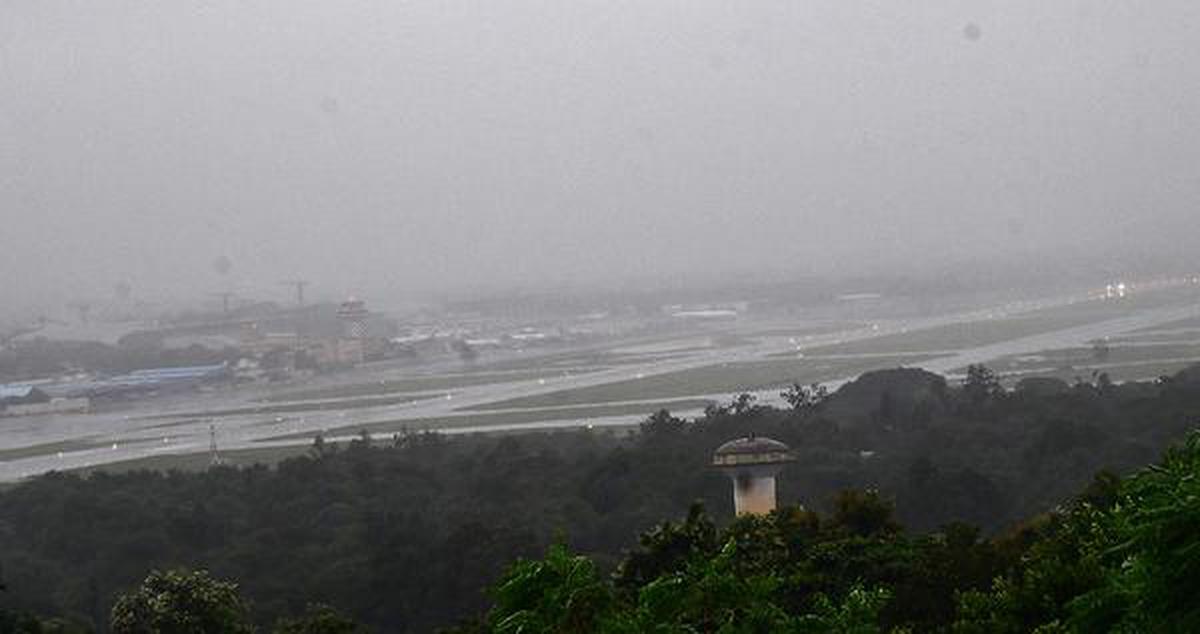 Empty tracks: A view of a flooded runway at the Chennai airport on Wednesday.
| Photo Credit:
B. Velankanni Raj

The official Twitter handle of AAI Chennai Airport said “The closure of #AAI #Chennaiairport due to #CycloneNivar stands extended till 0900hrs of 26.11.2020, on assessing the prevailing climatic conditions and taking passenger safety as top priority. The inconvenience caused is deeply regretted.”

The Chennai airport had suspended domestic, international and cargo operations from 7 p.m. on Wednesday till 7 a.m. on Thursday in the wake of Cyclone Nivar.

Airports Authority of India (AAI) officials said the decision was taken considering the safety of the passengers.

One killed, many injured as Nivar makes landfall in Puducherry

According to the police, a 47-year-old woman died when her house collapsed at Konur near Villupuram. The house collapsed due to the heavy rain before the direct landfall of the cyclone happened, police said. Her husband, who was also trapped, was rescued and is now undergoing treatment at a government hospital in the district.

Two people sustained minor injuries near Nettapakkam in Puducherry when their house collapsed early morning. They were treated at the Primary Heath Centre and discharged.

One elderly woman with a child was rescued from Rainbow Nagar in Puducherry after their house got inundated.

More than 10 trees got uprooted in the town and East Coast Road in Puducherry. Power supply in several parts of the U.T. remained disrupted from Wednesday 11 a.m. According to an Electricity Department official, supply would be restored only after the wind stops.

Early reports suggest not much damage in Cuddalore district, except for incidents of trees falling.

Deputy Director General of Meteorology, Chennai, S Balachandran said rainfall is likely to continue in Tamil Nadu. “The storm now lies inside the land area. There will, however, be rainfall and strong winds as well,” he told PTI. In the next six hours, the severe cyclonic storm will further weaken, he said.