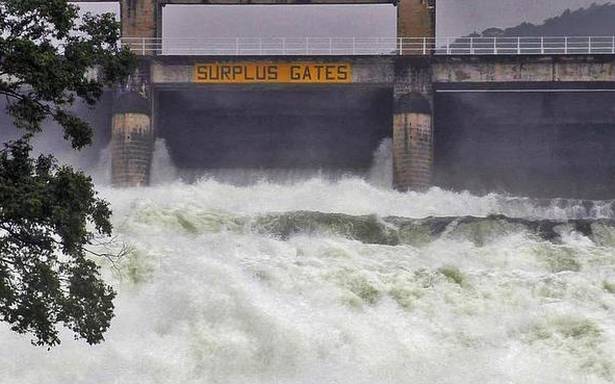 Officials said copious rainfall along the western ghats had benefited districts like Tirunelveli, Tenkasi and Theni.

Major dams in southern Tamil Nadu have reached their maximum storage level, thanks to the northeast monsoon and rainfall brought in by cyclone Burevi in the catchment areas, PWD officials said on December 20.

Speaking to The Hindu, officials said copious rainfall along the western ghats had benefited districts like Tirunelveli, Tenkasi and Theni. While Tamirabharani river in Tirunelveli district was in spate since Saturday, the Vaigai river had reached the tail end in Ramanathapuram district after passing through Theni, Dindigul, Madurai and Sivaganga.

Interestingly, many of the dams — both big and small — received copious water after five to seven years.

The Kamarajar dam (Athur) in Dindigul reached its full storage capacity a few days ago, prompting T.N. Forests Minister Dindigul C. Srinivasan to announce that there was sufficient water for residents of Dindigul to use for drinking purpose all of next year.

The Tamil Nadu Vivasayigal Sangam (Farmers’ Association) members in Sivaganga district thanked the T.N. government for the “kudimaramathu” project, which had facilitated the desilting of tanks and “ooranis” since 2016-17.

The generally bone-dry Ramanathapuram district too had benefited from the project. The rainfall, in addition, had resulted in the Big Tank getting good inflow of water.

According to K. Veera Raghava Rao, who was till recently Collector of Ramanathapuram district, a lot of effort was put in, to revive and restore water bodies in the last two years. Out of 640 PWD tanks, 150 were taken up for desilting in 2018-20; out of 1,112 Minor Irrigation tanks, a little over 200 were worked on; and 998 ooranis out of 3,500 were desilted. One lakh farm ponds came up in the district, for which it bagged the Skoch award. The district, which reeled under drought in 2016, 2017 and 2018, was able to save rainwater in the subsequent two years, Mr. Rao said and attributed it to the government’s schemes.

The good efforts of the then Collectors, Shilpa Prabhakar Satish in Tirunelveli and Sandeep Nanduri in Thoothukudi, hastened the tanks and water bodies desilting process in the respective regions. One of the biggest dams — Papanasam — had 142.40 ft. of water as on date (with a maximum level of 143 ft.).

Farmers in Tirunelveli, Thootukudi, Kanniyakumari and Tenkasi welcomed the rainfall and attributed the sufficiency of water to the sustained efforts of officials. Not only had conservation of water become a reality, but value additions like fish culture were made possible due to farm ponds, they said.

In Tenkasi, except Adavinainaru dam, all the others, including Karuppanadhi dam, had full storage or surplus water. For both drinking and irrigation purposes, the water would be sufficient, a Municipal official in Shencottah said.

Thoothukudi, which received below-normal annual rainfall till November first week, almost reached its target due to very heavy rainfall in the later part of the month. Many low lying areas were inundated, is a different story that exposed the poor upkeep by the civic authorities.

In Theni and Dindigul, the catchment areas received enough rainfall ensuring not only the yield, but coverage area also increased, according to the Agriculture and Horticulture Department officials.

Dams in Tirunelveli district: (data received as on Dec 20)