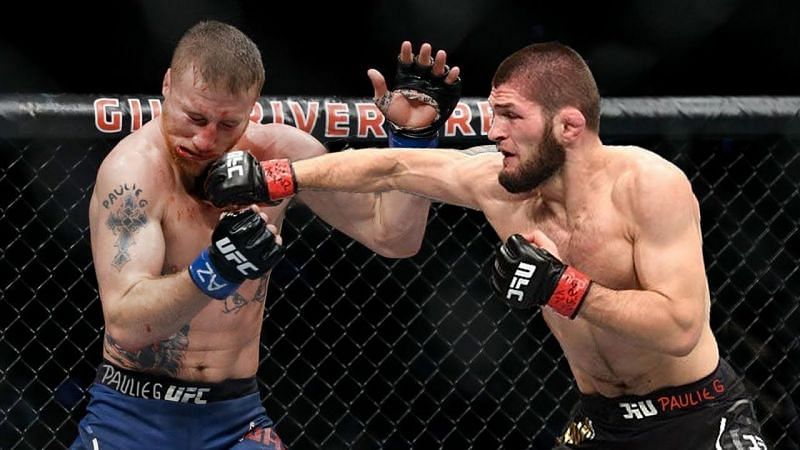 UFC president Dana White has revealed the mid-fight conversation that Khabib Nurmagomedov had with Justin Gaethje at UFC 254.

Khabib Nurmagomedov defeated Justin Gaethje via second-round submission in their UFC lightweight title unification matchup at UFC 254 in October 2020. The Eagle has a penchant for speaking to his opponents during his fights, and his fight against Gaethje was no different.

At the UFC Fight Island 7 post-fight press conference, Dana White let fans know what Khabib Nurmagomedov said to Justin Gaethje during their fight. White revealed that in his recent meeting with Nurmagomedov, the latter narrated the mid-fight conversation he had with Gaethje:

“Khabib was telling me when I was with him last night – and I didn’t know this, maybe you guys knew this – but, you know, all the stuff that him and Gaethje were talking about during that fight. He told me last night that he’s never been hit or kicked harder ever in a fight than by Gaethje. And Gaethje hit him with a couple of shots, and then he thought Gaethje looked kind of weird. And he pointed at him and said, ‘you have jetlag’, in the middle of the fight. Gaethje said, ‘no, I don’t’, and hit him with an uppercut and a left hook, he said.”

“And then Khabib said something to him again, and he leg kicked him. And then I guess when Khabib took him down and was on top of him, he said, ‘Now what are you going to do?’ – He’s telling me all this sh** that those two were talking about during the fight. First of all, the fight didn’t even go that long. I don’t know how they would have that much of a conversation.” (*H/T Sportskeeda for the transcription)

Max Holloway was notably speaking to his opponent Calvin Kattar and the UFC commentary team during his fight at UFC Fight Island 7. Dana White addressed this similarity between Holloway’s recent performance and Khabib Nurmagomedov’s fight against Gaethje, praising both Holloway and Nurmagomedov.

Be it the pound-for-pound greatest fighters’ list or the UFC lightweight throne, Khabib Nurmagomedov has reigned supreme with his unprecedented undefeated streak and admirable work ethic.