Home EntertainmentGossips D’Andra Simmons on Why She Spoke of Brandi’s Scandal, Claps Back at Claims of Being “Selfish” & RHOD Cast Gang-Up

D’Andra Simmons on Why She Spoke of Brandi’s Scandal, Claps Back at Claims of Being “Selfish” & RHOD Cast Gang-Up 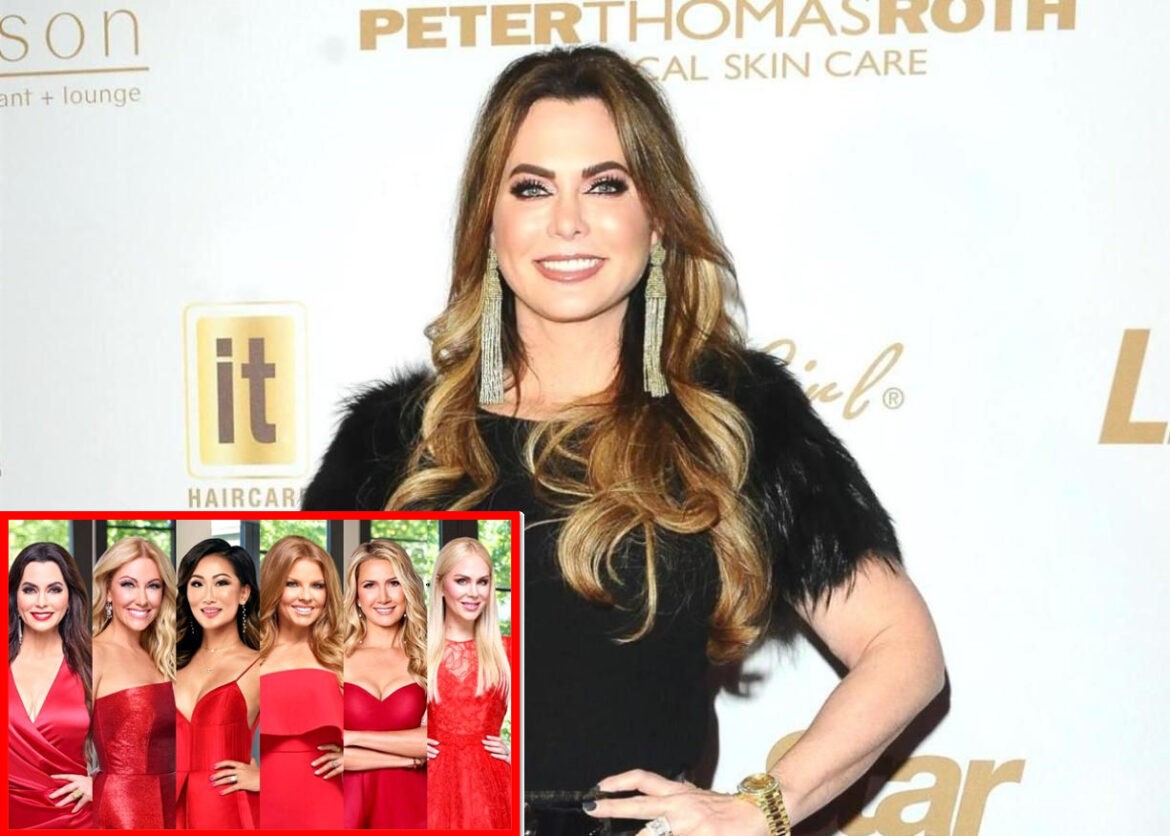 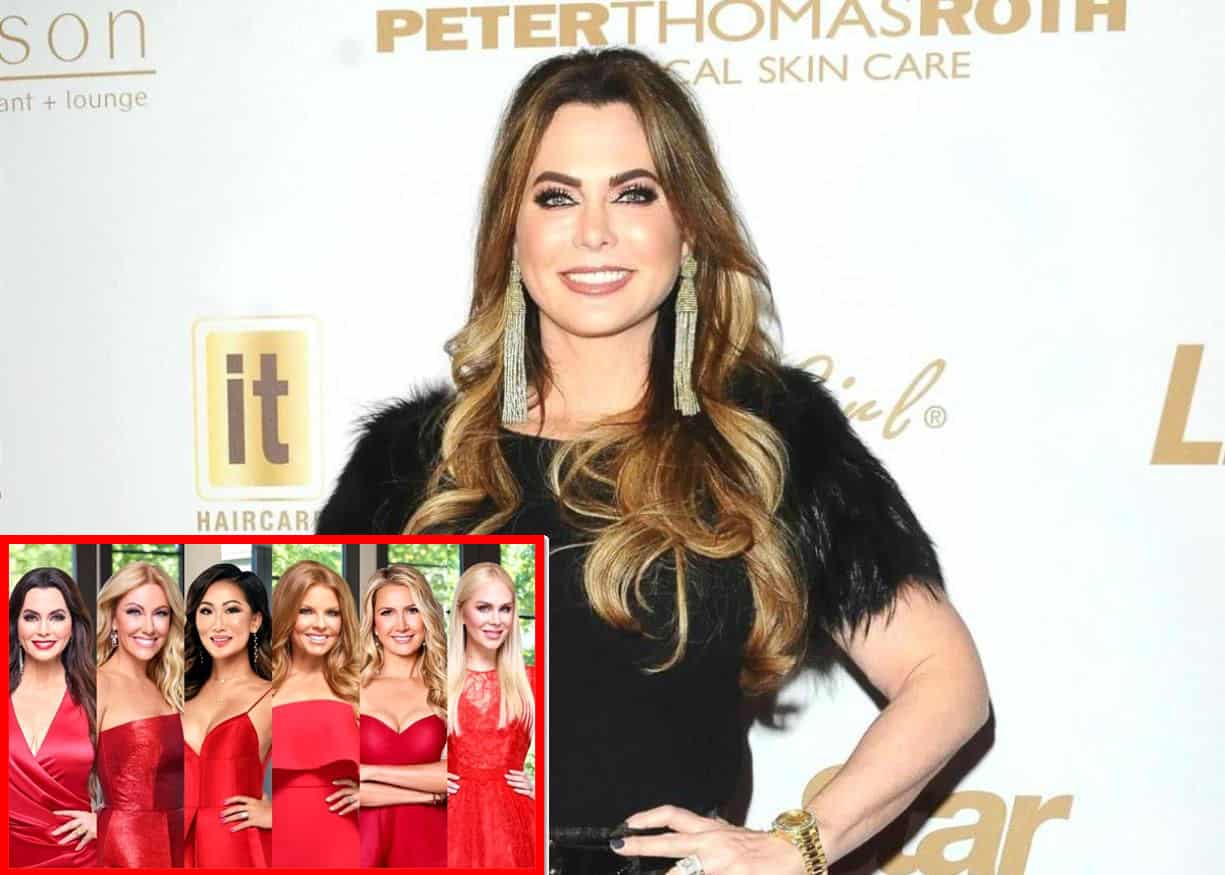 D’Andra Simmons is firing back at claims made during Tuesday night’s episode of The Real Housewives of Dallas.

After being confronted about her public comments regarding Brandi Redmond‘s Asian video scandal, which Kary Brittingham believed were made to get attention on her film, My Brother’s Crossing, D’Andra took to her Twitter page where she denied being “selfish” and took aim at her co-stars’ gang-up.

“I was asked by the interviewer about Brandi’s video, so I simply wanted to make a point that we don’t shy away from addressing racism in our group – simple as that. Not sure how this got twisted into me being ‘selfish,’” D’Andra tweeted on March 30.

When D’Andra was then met with a woman who pointed out that edit teams are the ones who control headlines, D’Andra said, “We all know that too!”

“I can’t control what the media uses as their headlines. Trust me, I don’t need to use anyone’s name for press purposes,” she continued. 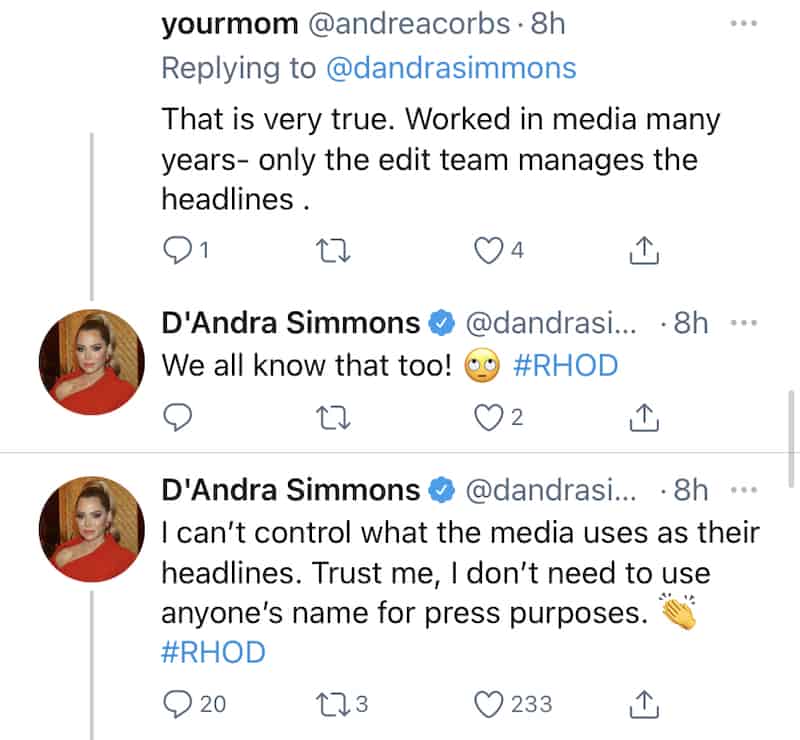 During an interview with Entertainment Tonight ahead of Tuesday’s show, Kary suggested D’Andra had commented on Brandi’s scandalous video to promote the movie she produced.

“She used Brandi on there to be the headline, and I just don’t think that it was fair to Brandi, to do that. And Brandi was really hurt,” Kary explained.

Also on Twitter, D’Andra looked back on the episode in question, during which she was confronted by her cast mates and reminded everyone that while she did speak of Brandi’s video, she wasn’t the one who made it.

“Totally ridiculous!! You didn’t do anything wrong! You were trying to be a good friend to her,” one person said.

Then, another RHOD viewer spoke of the ladies’ gang-up, saying, “It was literally [five] women standing there with their arms crossed staring at you! What did they expect you to do!” 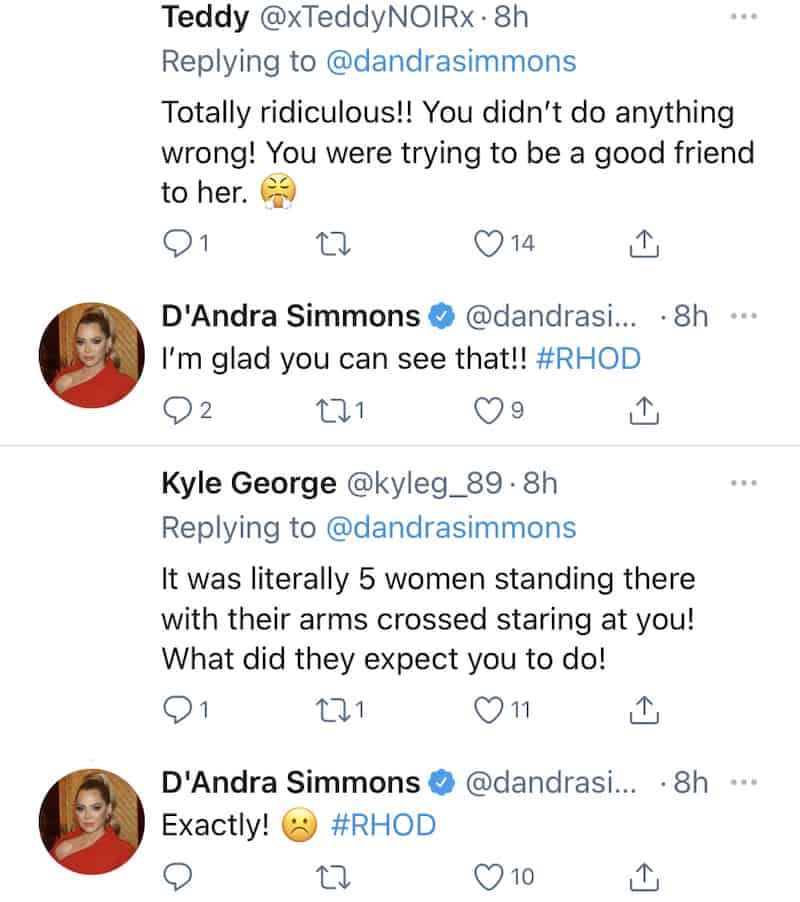