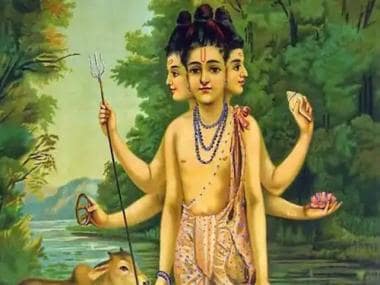 Datta Jayanti or Dattatreya Jayanti is the birth anniversary of a Hindu deity encompassing the trinity of Lords Brahma, Vishnu and Maheshwar (Shiva), collectively known as the Trimurti

Datta Jayanti or Dattatreya Jayanti is the birth anniversary of a Hindu deity encompassing the trinity of Lords Brahma, Vishnu and Maheshwar (Shiva), collectively known as the Trimurti.

The festival is celebrated on the full moon night of Margashirsha according to the Hindu almanac. In 2020, the date falls today (Tuesday, 29 December).

Dattatreya, born out of the holy trinity in the Hindu pantheon of gods, was a sage who attained enlightenment without a guru. Some scriptures also called him an incarnation of Lord Vishnu.

According to Drikpanchang, the purnima tithi for Dattatreya Jayanti 2020 begins at 7.54 am on 29 December and ends at 8.57 am on 30 December.

Legend has it that Lord Dattatreya was born to sage Atri and his wife Anasuya. She performed tapas to get a son with the qualities of the holy trinity. Seeing Anasuya perform such severe austerities, goddesses Saraswati, Lakshmi and Parvati became jealous and asked their respective husbands, Brahma, Vishnu and Shiva, to test her virtue.

The three appeared in front of her in the garb of ascetics and asked her to given them alms while naked. Anasuya uttered a mantra and sprinkled water on them, turning them into babies, whom she then breastfed while naked. When sage Atri returned, he transformed them into a single child with three heads and six arms.

When the goddesses learnt of the predicament of their husbands, they begged Anasuya for forgiveness and to return their husbands. Anasuya heard their pleas and the Trimurti appeared in their true form, blessing the sage and his virtuous wife with a son Dattatreya.

On the occasion of Datta Jayanti, devotees wake up early and take a bath in holy water as well as observe a fast. They offer flowers, incense sticks lamps and sweets to God Datta during the puja ceremony.