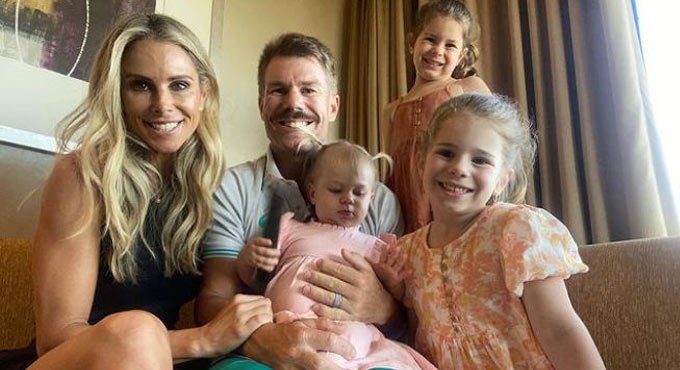 Sunrisers Hyderabad skipper David Warner is next on the list of overseas players who has departed for India for IPL 2021. He left on Monday afternoon and will join his SRH teammates soon. The majority of Indian players have joined their respective IPL franchises while many overseas players are also on their way to India after completing their respective assignments. The players will have to serve the mandatory isolation period upon landing in India.

Meanwhile, David Warner’s wife Candice has shared an adorable message on her Twitter handle just before she said goodbye to her husband. She shared a couple of pics with their young daughters.

“Bye daddy we love you. @SunRisers get ready, @davidwarner31 is incoming! #IPL2021 #OrangeArmy” she wrote on Twitter.

Warner, a one-time IPL-winning captain, will be leading SRH in his 6th season. He was first appointed as the captain of the Orange Army in 2015 and led them to their maiden IPL title in 2016. SRH made it to the second round next year.

He missed the IPL 2018 due to a one-year ban and played under Kane Williamson next year. Ahead of IPL 2020, SRH reinstated Warner as the captain. Warner led them into the second round last year. They defeated Royal Challengers Bangalore in the Eliminator and crashed out after losing the second Qualifier against Delhi Capitals.

Meanwhile, the franchise suffered a big blow as all-rounder Mitchell Marsh has puled out of the season. SRH have roped in Jason Roy as his replacement. While David Warner is sure to open the batting, Jonny Bairstow and Wriddhiman Saha are the options for the second opener’s choice. Bairstow and Warner have formed a formidable pair since the last couple of seasons and have scored over 60 percent of the team’s runs.

Warner will be staying in India at least till SRH’s final league stage game on May 21. Should SRH make it to the playoffs, Warner will be in the country till May 30. After the IPL 2021 fixtures, Warner will also have to serve 14-day isolation once he returns to Australia. SRH kick off their IPL 2021 campaign against Kolkatta Knight Riders on April 11.