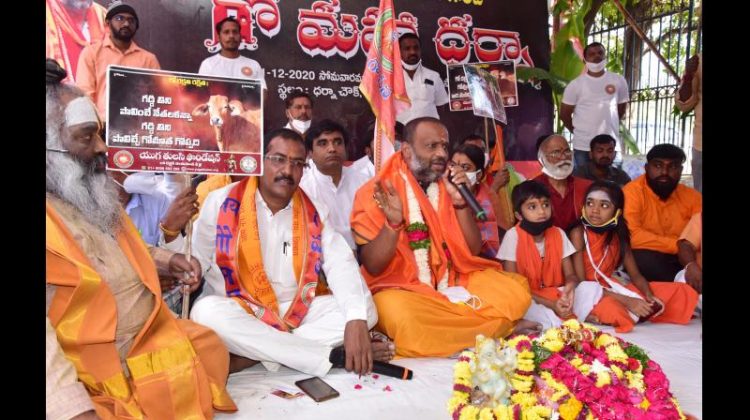 HYDERABAD: A one-day hunger strike was organised under the banner of Gau Mahadharna at Indira Park on Monday demanding that cow be declared as National Animal of India. Among those who participated in the dharna included politicians, social activists, cine actors and general public.

“Cow is sacred for Hindus, but the same is being slaughtered in this land. Until it is not declared as National Animal, protecting it will not be possible,” declared several speakers on the occasion.

Tirumala Tirupati Devasthanams Board member Kollisetti Shiva Kumar, speaking on behalf of Yuga Thulasi Foundation, asked: “If cows get wiped out from Telangana, how will we perform poojas to them on auspicious occasions? Cows can be saved only if we all take their protection on a mission mode and demand that they be declared as National Animal,” Shiva Kumar stated.
Organisers of the programme announced that a “Gow Sadak Bandh” will be organised on January 8, wherein the Vijayawada National Highway will be blocked at L. B. Nagar in Hyderabad. They said: “All Hindus must unite and demand that the state government respect our demand on protection of cows.”

Cine artist Satya Chowdary said, “I am very much interested in the cow protection cause. I will continue my support to the movement in the future too,” she maintained Jyothi Vamshi, who represents International Navya Mahila Sangh, pointed out their demand is very old. “We hope that the Union government will accept our proposal of granting cow the status of a National Animal,” she said.

Suhasini Saeethi, one of the participants from the public, declared that she postponed inauguration of her house to participate in the dharna. “Cow is sacred for all Hindus. Inauguration of my house can wait. But this cause is more important,” Suhasini remarked.