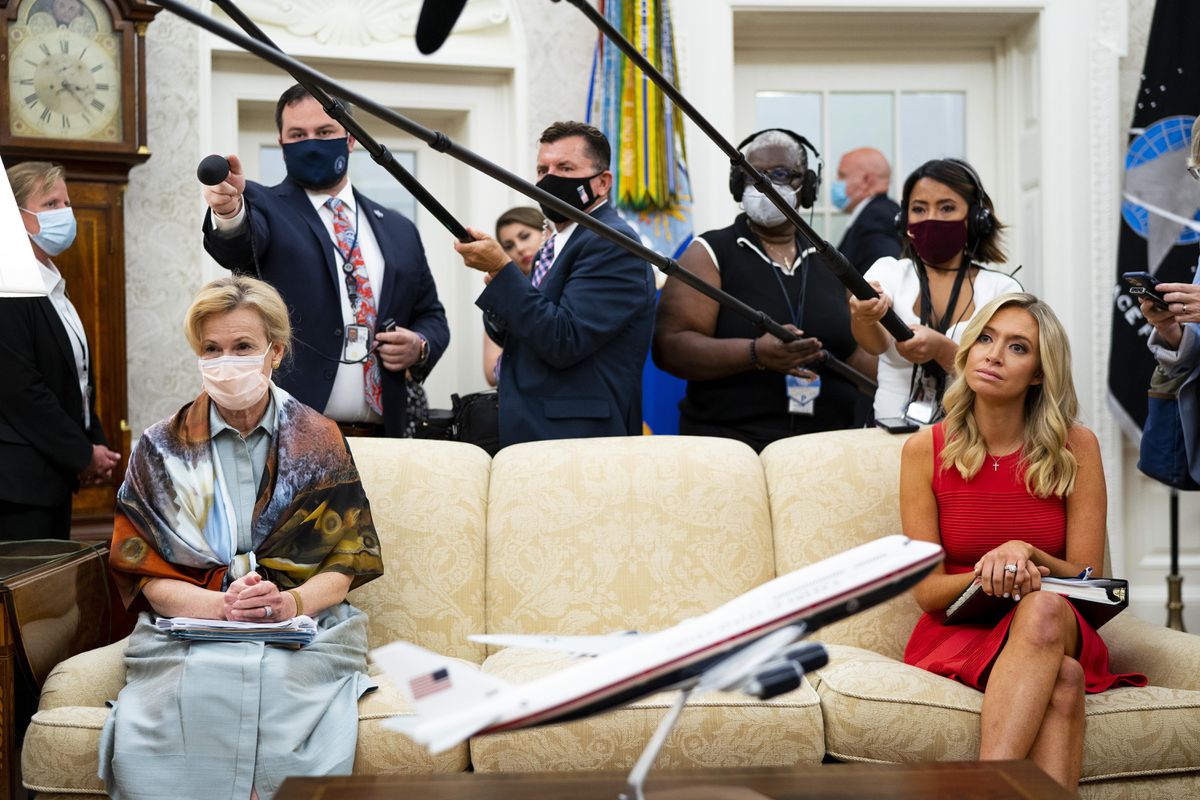 During an interview aired today on CBS’s Face the Nation, Margaret Brennan asked Deborah Birx, MD, how often she thought of quitting the White House’s Coronavirus Task Force when Donald Trump was U.S. President. Birx’s answer? Not once. Not twice. Not three times. But “always.”

“I mean, why would you want to put yourself through that every day,” Birx explained.

That’s a good question. Why would you? After all, a “well-oiled machine” is not the first thing that you think of when considering the Trump Administration’s response to the Covid-19 coronavirus pandemic, unless you are thinking of an oil slick. By the time Trump departed office with the strains of the Village People singing “It’s fun to stay at the YMCA,” and Frank Sinatra crooning, “I did it my way,” blaring in the background in a way that’s reminiscent of high school prom, the number of Covid-19-related deaths in the U.S. had topped 400,000. That’s easily the most of any country in the world and suggests that the U.S. has done a worse job than most other higher income countries in world in responding to the pandemic, unless you start making up countries like Freedonia or Russia-Lago.

Plus, 2020 was filled with “what the bleep” moments when it came to the Trump Administration’s pandemic response or lack thereof. For example, the scene in which Birx sat and watched as Trump mentioned the possibility of ingesting or injected bleach turned into an Internet meme:

Some dubbed the scene with the theme song from the TV series Curb You Enthusiasm, and @atrupar described the scene as, “you can almost see Dr. Birx’s soul leaving her body.” Then there’s the scene of answering Trump’s question of whether heat and light can be used to treat the Covid-19 coronavirus, even though the virus is neither a muscle injury nor a vampire:

The argument for “putting yourself” through all that was that a severe acute respiratory syndrome coronavirus 2 (SARS-CoV2) pandemic was raging and that leaving the Trump Administration would have been akin to leaving a running car and its keys with a caffeinated cats and a group of babies. In other words, leaving an Administration with little scientific expertise to run the response could have pushed the country further off the cliff.

Nevertheless, there was a third option: vocally raising opposition to what was happening. The press, the scientific community, and many others were listening to whatever scientists and public health experts within the Trump Administration was willing to say. There was back-up. There were channels. The concern is whether those within the White House Coronavirus Task Force did enough to curb the enthusiasm of Trump to downplay the pandemic, to suggest that the pandemic had quick fixes. After all, one man can only do so much without the support of those around him.

Questions will continue to circle those who did not speak out against Trump’s attitude towards the pandemic. The “c” word, meaning “complicit,” has floated around those who served loyally in Trump’s Administration. As you can see in the following segment from the Face the Nation interview, Birx discussed how her time with Trump may have affected her reputation:

Birx said: “Colleagues of mine that I had known for decades… decades in that one experience, because I was in the White House, decided that I had become this political person, even though they had known me forever.” She continued. “I had to ask myself every morning, is there something that I think I can do that would be helpful in responding to this pandemic and it’s something I asked myself every night.”

Also as you can see, when Brennan asked Birx,“You knew at that point that the election was a factor in communication about the virus,” Birx responded, “Yes. Yes.” Although when Brennan queried, “Did you ever withhold information yourself,” Birx did say, “no.”

Even though Birx may have “always” thought of quitting, she didn’t. And while Anthony Fauci, MD, the Director of the National Institute of Allergy and Infectious Diseases (NIAID) did have some public disagreements with Trump, folks on social media questioned why Birx didn’t do more to stand up to Trump. For example:

The question then was what Birx did or should have done when those “data streams” were paralleling. Virologist Angela Rasmussen, PhD, raised such questions:

And here is what journalist Soledad O’Brien tweeted:

Regardless, it looks like Birx’s time playing a prominent role in the nation’s response to the Covid-19 coronavirus pandemic may be over:

Is “not to my knowledge” the equivalent of “bye, Felicia?” When asked about Birx’s role going forward, new White House Press Secretary Jen Psaki did say that she would “have to circle back on that one”:

Not exactly a ringing endorsement. If you ask someone whether you are friends and that person responds, “I have to circle back on that one,” it’s not a good sign. CNN’s Kaitlin Collins did offer a stronger depiction of what has happened:

The concern in general about the Trump Administration’s response to the severe acute respiratory syndrome coronavirus (SARS-CoV2) has been that short-term political and financial agendas overrode the longer term health of the country. On many occasions, politics seemed to trump science so to speak. Or Trump seemed to trump science.

One possible difference between a “politician” and a “scientist” is that a “politician” says what he or she thinks others want to hear and a “scientist” doesn’t always say what others want to hear. It is important to hear now how science may have been side-stepped in 2020 and how not enough may have been done to prevent this from happening. Unfortunately, though, 2020 is now hindsight, and any changes going forward won’t have been soon enough to have saved any of the over 400,000 lives in the U.S. that have already perished from Covid-19.