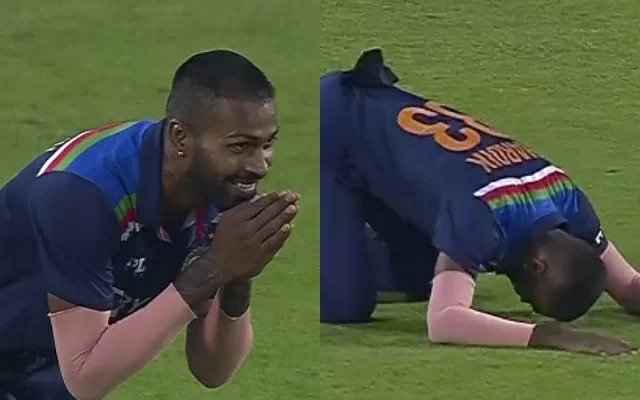 Team India all-rounder Hardik Pandya had a mixed outing during the 3rd ODI against India at the Maharashtra Cricket Association in Pune. Despite chipping in with match-winning contributions with both bat and ball, Hardik missed two easy chances in the field which almost took India out of the game during Sunday’s series decider.

Put to bat first, India managed to post a mammoth score of 329 runs on the board on the back of scintillating knocks by Rishabh Pant and Hardik Pandya as they slammed 78 off 62 and 64 off 44 respectively. The first innings of the match made India a hero among the fans for his blistering knock which propelled the Men in Blues to a respectable total.

But the initial overs of India’s bowling innings resulted in Pandya becoming the villain and being subjected to massive troll on social media. Virat Kohli & Co were off to a blazing start removing both the English openers early. Bhuvneshwar Kumar was on the verge of removing the dangerous-looking Ben Stokes but Hardik Pandya dropped a dolly despite reaching the target quite comfortably.

Dropping Stokes could have cost India the game as he was in exemplary form. However, much to the relief of the Indian all-rounder, the ace all-rounder lost his wicket to T Natarajan in the 11th over as Shikhar Dhawan easily completed the catch to send the batsman back to the pavilion while he was playing at 35 off 39. Hardik Pandya looked like a relieved and his reactions went viral on social media.

The 27-year-old literally bowed down to Dhawan for holding on to the catch along with thanking God for the prized wicket. The images garnered a lot of reactions and IPL franchise Delhi Capitals were quick to react to it. They came up with a quirky tweet on their official Twitter handle. Dhawan plays for Delhi in the IPL, thus Delhi Capitals trolled the Mumbai Indians player by posting a meme featuring Shikhar along with the caption, “You’re welcome, Hardik Pandya #INDvENG,”

Meanwhile, at the fag end of the game, Hardik Pandya dropped another easy catch off Sam Curran and he almost took the game away with an unbeaten 95-run knock. But the Baroda all-rounder and T Natarajan bowled exceptionally well in the 49th and 50th over to steal the game by seven and end the long season with another series win.