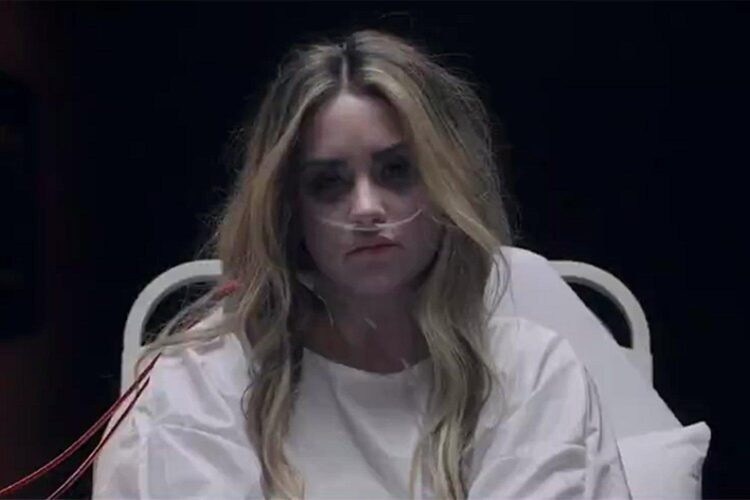 Art imitates life in Demi Lovato’s new music video for her single “Dancing with the Devil.”

In the video, which premiered Friday, the singer, 28, recreates the moments leading up to, during and after her 2018 near-fatal overdose. She can be seen partying at a bar then being transported on a gurney and lying unconscious in a hospital bed with three women — presumably meant to represent her mother Dianna De La Garza and two sisters Dallas and Madison — gathering around her.

Throughout the scenes, Lovato stays true to the details from the real-life incident, from her hair to her makeup. She even wears a green jacket similar to the one she was wearing the night of her overdose.

In the tell-all docu-series, Lovato opened up about the moment she relapsed in 2018, six-years into her sobriety.

“I picked up a bottle of red wine [one] night, and it wasn’t even 30 minutes before I called someone that had drugs on them,” she said. “I’m surprised that I didn’t OD that night. I ended up at a party and ran into my old drug dealer from six years before. That night I did drugs I had never done before.”

Lovato then went on to reveal that she mixed meth, molly, weed, alcohol and oxycontin that night. “That alone should’ve killed me,” she said.

But in July of that year, things came to a head. After celebrating a friend’s birthday, Lovato said she was going to go to sleep around 5:30 a.m., but “the reality was that I called one of my dealers over.”

The next morning, her personal assistant Jordan Jackson opened the door and found that “she was not waking up or responding.”

“There was one point where she turned blue. Her whole body turned blue. I was like, ‘She’s dead for sure,'” Jackson said in the film. “It was the craziest thing I had ever seen.”

In the series, Lovato’s neurologist Dr. Shouri Lahiri revealed that her oxygen levels were “dangerously low and trending down” and that the first places to be affected in her body were the back of her brain and her vision. She also had dialysis to clean her blood.

“I had three strokes. I had a heart attack. I suffered brain damage from the strokes. I can’t drive anymore. I have blind spots in my vision. When I pour a glass of water, I’ll totally miss the cup because I can’t see it anymore,” Lovato said. “I’ve also had pneumonia because I asphyxiated and multiple organ failure.”

RELATED: From Nearly Dying to Healing from Sexual Assault: Everything Demi Lovato Shares in Her Docuseries

While she is now in a better place, Lovato admitted that she’s not completely sober and still drinks and smokes weed in moderation. She insisted, though, that she’s cut out hard drugs completely.

“I’ve learned that shutting a door on things makes me want to open the door even more. I’ve learned that it doesn’t work for me to say ‘I’m never gonna do this again,'” she said. “Telling myself I can never have a drink or smoke marijuana is setting myself up for failure because I am such a black-and-white thinker.”

With her new music and her story now out in the world, Lovato recently told PEOPLE that she’s embracing her second chance.

“It feels like such a fresh start,” she said. “I feel like I am the freest I’ve ever been. It feels great to live in my truth fearlessly.”

“I feel proud, but I also know I’m not hanging my hat up yet,” she added. “I have so much work to continue to do, and the work that I’ve done has been so exciting because it’s opened up my doors to my spirituality, embracing my identity, coming into myself more and just exploring that.”

If you or someone you know is struggling with addiction, please contact the SAMHSA substance abuse helpline at 1-800-662-HELP.