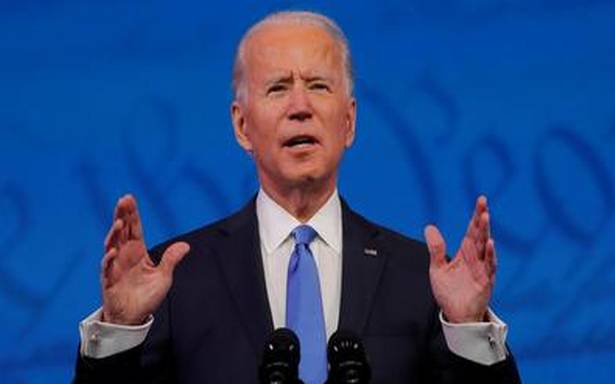 Speaking at Wilmington Delaware after the Electoral College had officially given him enough votes to be declared President, Democratic candidate Joe Biden said that American democracy had been tested and had proved to be strong. He described at length the Trump campaign’ s legal challenges to the November 3 presidential election results and criticised Republican lawmakers and officials who had joined a Texas lawsuit to overturn the results of the vote in key battleground states that he had won.

“And once again in America, the rule of law, our Constitution, and the will of the people have prevailed. Our democracy — pushed, tested, threatened — proved to be resilient, true, and strong,”  Mr. Biden said,

“In America, politicians don’t take power. People grant power to them. The flame of democracy was lit in this nation a long time ago. We now know nothing — not even a pandemic or an abuse of power — can extinguish that flame,”  Mr. Biden said.

Mr. Biden called “ unconscionable”  the threats made to those overseeing the election process.

“While we all wish that our fellow Americans in these positions will always show such courage and commitment to free and fair elections, it is my sincere hope that we never again see anyone subjected to the kind of threats and abuse we saw in this election,” Mr. Biden said. “ It is unconscionable.”

The President Elect said that Mr. Trump had called his 2016 victory – where the President had won 306 votes – a landslide and the same applied to Mr. Biden’s own victory this year.

“By his own standards, these numbers represent a clear victory then and I respectfully suggest they do so now.”

“ And I am pleased — but not surprised — that a number of my former Republican colleagues in the Senate have acknowledged the results of the Electoral College. I thank them,”  Mr. Biden said.

A number of GOP senators who had refrained from acknowledging Mr. Biden’s win and  calling out Mr Trump’s attempts to overturn the results of the election changed tack after the Electoral College results came in.

“I am convinced we can work together for the good of the nation,” Mr. Biden said of these GOP Senators.

“The integrity of our elections remains intact. Now it is time to turn the page as we’ve done throughout our history. To unite. To heal. As I said through this campaign, I will be a president for all Americans,” Mr. Biden said.

The President-elect said urgent work had to be done in getting people vaccinated and delivering economic relief so the economy could be built back.

He noted that the U.S. death toll from the pandemic had crossed the 300,000 mark.

“My heart goes out to all of you in this dark winter of the pandemic about to spend the holidays and the new year with a black hole in your hearts and without the ones you love by your side, he said, adding that the country will get through its current difficulties.

Mr. Biden ended his speech by quoting lines from a prayer of St Francis of Assisi.