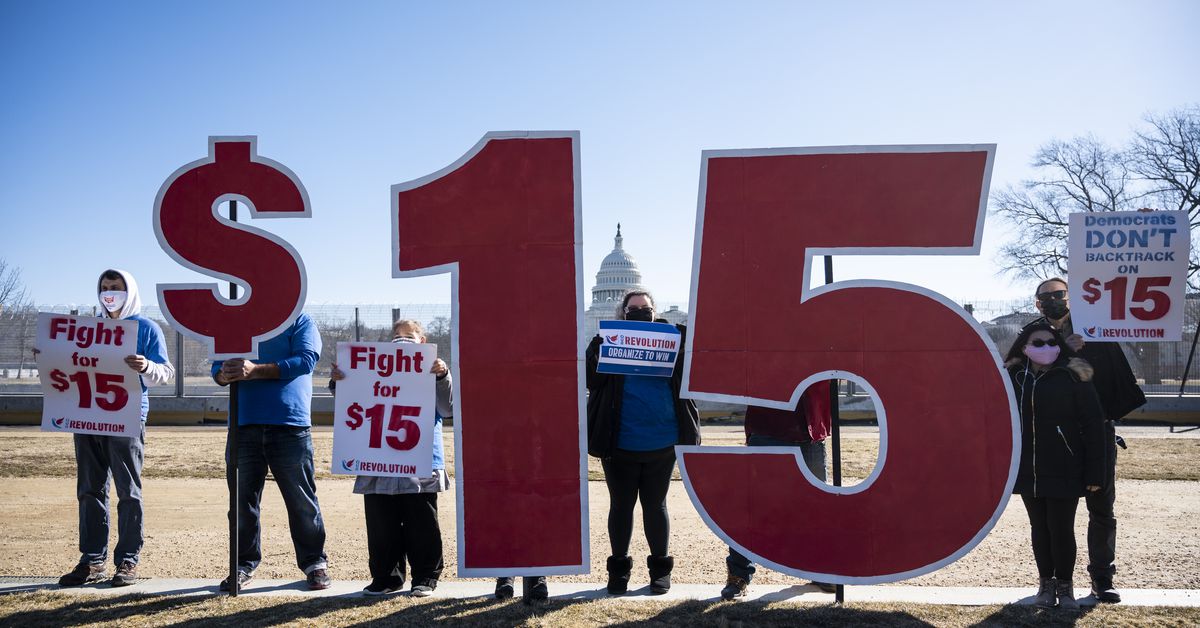 The Senate parliamentarian on Thursday dealt Democrats a disappointing blow in the fight for the $15 minimum wage — ruling that it can’t be included in a Covid-19 relief package if lawmakers want to use budget reconciliation.

That decision likely means that the $15 minimum wage is effectively dead — for now. As Sen. Bernie Sanders (I-VT) has said repeatedly, 10 Republican senators are not going to sign on to this type of increase, meaning lawmakers won’t be able to get the 60 votes it needs to pass through regular order.

Given this dynamic, Democrats are now scrambling to figure out how they could still push for some kind of minimum wage increase via either the relief package or a standalone compromise bill with Republicans down the line. “We are not going to give up the fight to raise the minimum wage to $15 to help millions of struggling American workers and their families,” Senate Majority Leader Chuck Schumer said in a statement.

A couple of options have been floated, but none appear to have the full support of the party’s caucus just yet.

One of the most straightforward possibilities — which progressives have pushed — is for Democrats to simply ignore the decision of the parliamentarian and include the $15 minimum wage in the bill anyway. That suggestion has garnered pushback from moderate Sens. Joe Manchin (D-WV) and Kyrsten Sinema (D-AZ), however, a sign that it probably won’t happen.

Sanders has also posed another option: He’s said he’ll introduce an amendment to the relief bill, which would establish a tax penalty that incentivizes large corporations to pay their workers a $15 minimum wage and gives small businesses a tax credit for doing so. That change wouldn’t set a new federal standard for the minimum wage, but it could help nudge businesses into offering their employees better pay. Schumer, too, has offered his backing for a plan that dings corporations that don’t raise their wages.

Ultimately, Democrats may have to consider a potential compromise with Republicans to advance any type of standalone change to the minimum wage. Thus far, five Republicans — led by Sens. Mitt Romney (R-UT) and Tom Cotton (R-AR) — have backed legislation that would increase the minimum wage to $10 by 2025, a change that would also be tied to immigration enforcement. Sen. Josh Hawley (R-MO), too, has introduced a bill that would require a $15 minimum wage at companies that make $1 billion or more in annual revenues.

Such limited changes, though, fall far short of what many Democrats have been demanding, suggesting that the minimum wage could be among the policy areas that build the case for eliminating the filibuster down the line. Were Democrats to take that route, they’d be able to approve all types of legislation, including a $15 minimum wage, with 51 votes.

Following is a rundown of ideas that have been suggested so far.

Fire or ignore the parliamentarian

Because the parliamentarian’s decision is simply advice and not a binding verdict, Democrats still have the option of either firing her or ignoring her guidance, though they probably won’t do so.

Many progressives have called for Democrats to keep the $15 minimum wage in the bill despite the parliamentarian’s position, a move that would likely prompt a challenge from Republicans on the floor. If a challenge is lodged while the bill is being debated, Vice President Kamala Harris — or whoever is presiding over the Senate — is able to overrule that challenge, effectively preserving the $15 minimum wage. Then 60 votes would be needed to nullify Harris’s decision.

There is some precedent for ignoring the parliamentarian, as the Washington Post outlines:

Parliamentarians have been ignored in the past, like in 1975, when Vice President Nelson Rockefeller ignored the advice of the parliamentarian as the Senate debated filibuster rules. [Current parliamentarian Elizabeth] MacDonough has been overruled twice before: in 2013, when Democrats deployed the so-called nuclear option to eliminate filibusters to approve presidential nominees, and in 2017, when Republicans expanded the filibuster ban to include Supreme Court nominees.

And progressive leaders have been vocal about wanting to pursue this route. “We can’t allow the advisory opinion of the unelected parliamentarian to stand in the way,” Congressional Progressive Caucus Chair Pramila Jayapal said in a statement.

Manchin and Sinema, though, have already said they won’t violate the sanctity of the reconciliation process, suggesting they would not back such a move. The Biden administration has also said it intends to follow standard procedure. While moderate senators’ disagreement wouldn’t prevent Harris from overruling the parliamentarian’s advice, Democrats could risk losing their votes on the broader relief bill if they took that approach.

Democrats could also fire the parliamentarian, an act that former Senate Majority Leader Trent Lott actually did in 2001, after the official stymied the passage of Republican tax cuts. Such an effort would also likely prompt moderate blowback — and is seen as unlikely as a result.

Sanders has indicated he might get creative on finagling an indirect way to raise the minimum wage through the tax code. In a statement on Thursday evening, the Vermont independent said he disagrees with the parliamentarian’s decision and that he is going to try to get around it.

“In the coming days, I will be working with my colleagues in the Senate to move forward with an amendment to take tax deductions away from large, profitable corporations that don’t pay workers at least $15 an hour and to provide small businesses with the incentives they need to raise wages,” he said. “That amendment must be included in this reconciliation bill.”

Sen. Ron Wyden (D-OR), who chairs the Senate Finance Committee, echoed the possibility and said he is “looking at a tax penalty for mega-corporations that refuse to pay a living wage” in a statement. A senior Democratic aide also confirmed that Schumer is looking at a provision to penalize corporations that won’t pay workers $15.

Basically, this would translate to a tax on companies above a yet-to-be-determined revenue threshold that have employees paid at less than $15 an hour. Wyden said in a statement that he is working on a “plan B” that would impose a 5 percent penalty on corporations’ total payroll if workers earn below a certain amount, and the penalty would increase over time. He said he would seek to put in place safeguards that stop companies from, for example, replacing workers with contractors whom they pay less. He said he would also seek to “incentivize the smallest of small businesses” to raise wages through an income tax credit equal to 25 percent of wages up to $10,000 a year to small businesses that pay workers better.

Raising wages through taxes could fall within the bounds of budget reconciliation, because it has direct fiscal implications, though there’s some debate as to whether the parliamentarian might rule against it, too. It’s not entirely dissimilar to what Republicans did in their attempt to repeal the individual mandate in the Affordable Care Act when they enacted the 2017 tax cuts. They weren’t able to directly scrap it through reconciliation, but they reduced the penalty for not having health insurance to $0.

It’s not clear whether moderate Democrats would get on board with such a solution and raise taxes. And the clock is ticking on getting a bill to President Biden’s desk — expanded unemployment insurance under the last bill ends on March 14.

Barring any additional action on the relief bill, Democrats may face a less palatable option: compromise legislation with Republicans.

This week, multiple Senate Republicans put out messaging bills signaling their interest in increasing the minimum wage — though their proposals are much narrower than what Democrats have backed.

As Vox’s Gabby Birenbaum reports, the legislation from Romney and Cotton would raise the minimum wage to $10 by 2025, instead of the $15 proposed in Sanders’s bill. Additionally, it would require employers to use the E-Verify system, which would bar businesses from hiring undocumented employees. Because of both the more conservative increase that’s proposed in this bill and the immigration enforcement component, Democrats aren’t expected to be very supportive.

A new bill from Hawley would also require corporations that have $1 billion or more in annual revenues to pay a $15 minimum wage, and provide tax credits to small-business employees who make below the median wage. Hawley’s measure has an immigration enforcement piece, too: Any potential credits wouldn’t be accessible to undocumented people.

These bills indicate that at least six Republicans are interested in some type of action on the minimum wage, though that still falls short of the 10 who’d be needed to approve a bill via regular order. Plus, the proposals they’ve put out have already prompted progressive blowback because of how restrictive they are.

The parliamentarian’s ruling kicked up an ongoing debate among Democrats: whether it’s time to eliminate the filibuster and make it possible for any bill, not just ones under budget reconciliation, to pass under a simple majority. The Senate makes its own rules and can change them with a majority vote at any moment. If Democrats really want to pass the minimum wage — or plenty of other pieces of legislation, really — with 51 votes, they can.

In an interview with Politico, Sen. Elizabeth Warren (D-MA) suggested they might go that route on the minimum wage. “If we can do it through reconciliation, great,” she said. “If we can’t, then we need to tackle the filibuster issue and then pass minimum wage.”

She isn’t alone in drawing attention to the filibuster. In a tweet on Thursday, Sen. Brian Schatz (D-HI) wrote, “The filibuster was never in the constitution, originated mostly by accident, and has historically been used to block civil rights. No legislatures on earth have a supermajority requirement because that’s stupid and paralyzing. It’s time to trash the Jim Crow filibuster.” Many other lawmakers followed suit.

We need to abolish the filibuster.

Again, abolishing the filibuster doesn’t have the support of the entire Democratic caucus. Sinema told Politico recently that she wants to strengthen the filibuster and “restore the 60-vote threshold for all elements of the Senate’s work.” Manchin has made quite clear he doesn’t want to scrap the filibuster, either.

Whatever happens with the minimum wage, this conversation isn’t going away: The filibuster is going to stand in the way of much of the Democrats’ agenda.