Denmark Toughens Rape Law to Include Sex Without Consent 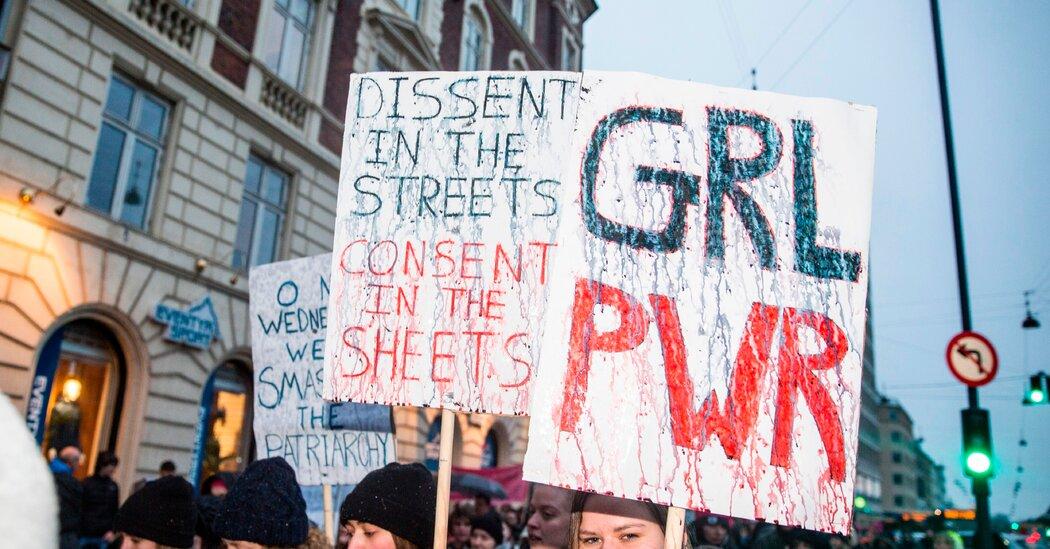 Denmark toughened its rape law on Thursday by criminalizing sex without explicit consent, a long-awaited victory for assault survivors and human rights groups.

In order to bring a rape charge, the law previously required proof of violence, threat or evidence that the victim was unable to fend off the assault. But the new legislation broadens the definition.

“Now it becomes clear that if both parties do not agree to sex, then it is rape,” Justice Minister Nick Haekkerup said after lawmakers unanimously approved the measure, which takes effect on Jan. 1.

Nevertheless, Danish women’s organizations have accused law enforcement and the justice system of failing to protect victims. And in a report published last year, Amnesty International denounced what it called a “pervasive ‘rape culture’ and endemic impunity for rapists.”

Women’s organizations and assault survivors who campaigned for the change welcomed the new legislation, saying it was long overdue.

“Rape is violence in itself,” said Kirstine Holst, a 41-year-old freelance journalist and assault survivor. “You shouldn’t need other types of violence to prove it.”

Even politicians who once opposed the introduction of a consent-based law changed their stance amid the campaign by rights groups. Soren Pape Poulsen, a conservative lawmaker and former justice minister, initially argued that introducing such a measure would be unpractical, but he began supporting it last year after listening to a woman who had been assaulted.

“Dear @amnesty. Thanks so much for putting this on the agenda,” he wrote on Twitter in March. “We must ensure that Danish legislation reflects the fact that sex shall always be voluntary. It is utterly important to bring justice to sexual assault victims.”

In 2014, Denmark ratified a European treaty, known as the Istanbul Convention, that said consent should be central to rape legislation. But it took years for the country to implement the accord.

“It was about time to get updated,” said Helena Jansen, the president of the Danish Women’s Society.

She also said a closer look at rankings showed that Denmark is not the model of gender equality it prides itself on being.

The Nordic country fell from fifth position in the World Economic Forum’s Global Gender Gap Report in 2014 to 14th this year.

“Both internationally and within the country, Denmark has this image of being a paradise for gender equality,” said Anna Blus, a researcher at Amnesty International who studies laws on sexual violence across Europe. “But when you start scratching the surface, you realize that it’s not really the case.”

About 11,400 women a year are victims of rape or attempted rape in Denmark, according to the Justice Ministry. More than half are under 25.

Last year, just over 1,600 rapes or attempted rapes were reported to the police, and 314 resulted in convictions in a country of 5.8 million people.

Women’s rights defenders said such numbers didn’t represent the full scope of the problem, because many victims have little faith in the police or the justice system.

“When they do report,” Ms. Blus said about survivors, “they start an obstacle course which often begins with the police and with questions that are permeated with rape myths and gender stereotypes.”

Numerous survivors in the country have spoken publicly about being assaulted and called for a change of mentality.

Trine Svensson, a 51-year-old employee at the Ministry of Higher Education and Science who said she was the subject of a violent assault in 2017, said that she had had faith in her country’s legal system until she got caught up in it.

Ms. Svensson’s said that her abuser had found guilty of rape, but that it had taken years and two courts to see him convicted. She added that under the new law, judges could have more strongly challenged the man who assaulted her.

Nina Beck Hansen, an assistant professor of psychology at the University of Southern Denmark who has studied reports of rape in the country, said the new legislation would play an important role in shaping how the public defines and talks about rape.

“Now it’s a matter of consent, of saying yes,” Ms. Beck Hansen said. “And it’s up to both parties to secure that there is consent.”

Yet women’s rights campaigners and researchers say the country is still struggling with misperceptions about sexual violence.

“A lot of people in Denmark still think that a rapist is some sort of monster jumping from behind a bush to attack you as you walk home at night, and some victims don’t see forced sex as rape,” said Ms. Hansen, the Danish Women’s Society president.

On Thursday, the Justice Ministry also announced plans to create a 24/7 hotline for victims of assaults and to update the sex education curriculum in primary and secondary schools. It also said it would set up specialized teams in each police district to improve how rape cases are handled and to “strengthen the victims’ confidence that their case will be taken seriously.”

Denmark is the 12th country in Europe to adopt a consent-based rape law, joining Belgium, Britain, Germany, Greece and Ireland, among others.

France recently updated its sexual violence legislation but ignored calls to adopt a consent-based rape law. And many other nations still do not comply with the European rights treaty despite having ratified it.

Sweden, one of the latest countries to adopt such a law, did so in 2018 with straightforward language: “Sex must be voluntary — if it is not, then it is illegal.” The number of rape convictions increased 75 percent from 2017 to 2019, according to government statistics.

Rape survivors and organizations in Denmark said they hoped their country would soon follow a similar path.

“The previous law expected women to behave in a way that wasn’t possible to sustain,” said Ms. Holst, who said that a former friend sexually assaulted her in 2017. She went to the police two days later.

“I didn’t walk away right after, because I was in shock,” she said. “I said no, but you couldn’t use that as a proof in court.”

The former friend was acquitted in 2018.

“The new consent-based rape law doesn’t expect the woman to fight with her rapist anymore,” Ms. Holst said. “It expects the man to not rape.”