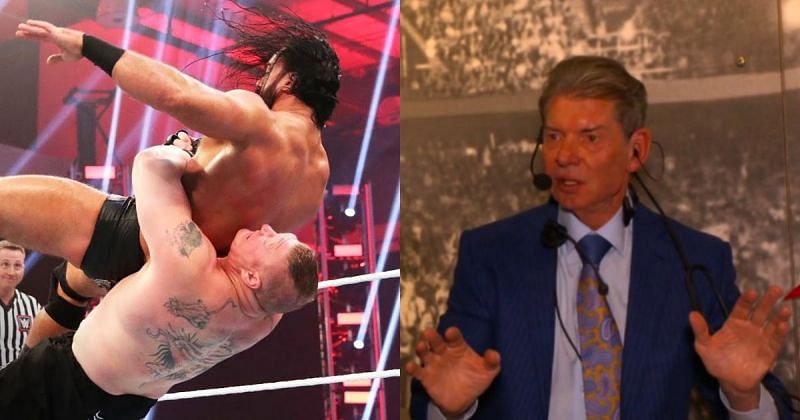 Many professional wrestling moves have been banned in the WWE to ensure the performers’ safety. Kurt Angle opened up about WWE’s stance towards certain moves during the first episode of his podcast on AdFreeShows, ‘The Kurt Angle Show’ with Conrad Thompson.

There was a time during the build-up towards WrestleMania 19 when many Superstars were injured, and WWE was contemplating making a few in-ring changes.

Kurt Angle said that WWE started banning moves, and he noted maneuvers such as the Piledriver, German suplex, overhead belly-to-belly, and of course, the chair shot to the head.

“Well, they started banning moves. It was something that happened instantly. Vince McMahon just said, ‘Hey, from now on, no more over-the-head belly to bellies.”

Angle revealed that only a handful of WWE Superstars were allowed to use the German suplex back then, and many other moves were banned for all wrestlers barring a few.

As the German suplex was a big part of the move sets of Brock Lesnar, Kurt Angle, and Chris Benoit, WWE permitted them to execute it in their matches. The other Superstars weren’t so lucky.

We are going to crack down on Germans unless you are Kurt or Brock and Chris Benoit because we were hitting the Germans pretty safely. He didn’t want to paint us in the corner where we were limited. Our German move is a big part of our offense. He was forbidding moves from occurring, you know, the chair shots, the Piledriver, the German suplex, belly-to-belly suplex, over-the-head, these were all banned for other wrestlers. And, rightfully so.”

One little slip could cause insurmountable damage: Kurt Angle on the piledriver ban in the WWE

Kurt Angle was also specifically asked about the Piledriver.  The Piledriver is high on top of the list of moves that were deemed too dangerous to perform.

While Angle felt that the Piledriver wasn’t as dangerous as the chair shot, the move was still risky as a small mistake could lead to significantly painful and potentially career-ending consequences.

“No, I don’t. But, you know, the Piledriver can be serious if you don’t do it right, and the thing is, one little slip could cause, you know, insurmountable damage. I understand why they made it illegal. You are not allowed to use it because, you know, there have been people who have gotten injured, but most of the time, no one does get injured from it. I just think that you take the chance when you do something like that.”

If any quotes are used from this article, please credit ‘The Kurt Angle Show’ and give a H/T to SK Wrestling and link it back to this article.