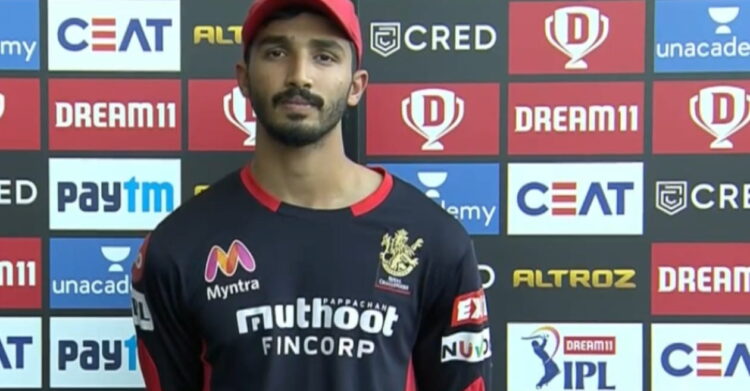 Devdutt Padikkal, the emerging talent who shone brightest in 2020 IPL, has warmed up for the coming edition with an outstanding show in the Vijay Hazare Trophy one-day tournament, where he became the first Indian to score four successive hundreds in List A cricket.

As he gears up for his first IPL at home, the 20-year-old speaks about rubbing shoulders with Virat Kohli and AB de Villiers at Royal Challengers Bangalore and making a mark against the likes of Jasprit Bumrah.

Both youngsters broke the previous aggregate record of 723 runs (Mayank Agarwal in the 2017-18 edition). Devdutt Padikkal aggregated 737 runs (avg 147.40), finishing only behind the 827 runs Prithvi Shaw scored in Mumbai’s win.

As he gears up for his first IPL at home, the 20-year-old speaks about rubbing shoulders with Virat Kohli and AB de Villiers at Royal Challengers Bangalore and making a mark against the likes of Jasprit Bumrah.

“What I have learned for the past two-three years (is) that I can’t be really bothered about the selection. It is not in my control. What I am looking to do is to improve my game every day, work on myself,” on ODI selection.

Aditya Tare’s unbeaten century helped Mumbai chase down a stiff target of 313 in the Vijay Hazare Trophy final but the batsman who stole the show throughout the tournament was opener Prithvi Shaw, who roared back into form after looking like a pale shadow of himself during India’s tour of Australia.

It was Mumbai’s fourth triumph in the Vijay Hazare Trophy and their second in the last three years. Only Tamil Nadu has won the title more times (5) than Mumbai. Prithvi Shaw and Devdutt Padikkal grabbed the headlines by scoring four centuries each but it was the Mumbai batsman who seemed to get better as the tournament progressed.

“That was a pretty special experience to have. You get to learn so much from them. The kind of passion and drive they have for the game, the way they play, the way they carry themselves through the busy, long tournament,” on having Virat Kohli and AB De Villiers on the same team RCB.

“He is such a special player. You have to just watch and admire how he bats,” on AB De Villiers.

“I have spoken to him a few times during practice (at M Chinnaswamy Stadium) when he is around at NCA (National Cricket Academy). Even he has told me to keep working hard and keep improving,” on Rahul Dravid.

“Playing in India makes it special; I am looking forward to having a good season,” on IPL 2021 being in India not abroad.

“The ultimate goal is to play for India in the longest format,” on goal.

“I follow football a lot. I am a Manchester United fan, I pretty much do not miss any of their games”, on other sports.

“Initially, it was fine, everyone just looked forward to playing cricket, so everyone managed bio-bubble life as well as they could. But the longer it goes, it gets a little tiring, a bit monotonous. But it is important we continue to enjoy each other’s company. It is a different feeling… (but) we don’t have a choice, ” on life at bio-bubble.

Devdutt Padikkal scored 473 runs in 15 games averaging 31.53 with five fifties in IPL 2020. The 20-year-old uncapped batsman was one of just five players to play every game of his team’s IPL campaign.

A lot was spoken about Devdutt Padikkal and his chances of making a mark with the Royal Challengers Bangalore (RCB) squad ahead of IPL 2020, with the team’s Director of Cricket Operations, Mike Hesson, taking a special interest in the left-hander from Karnataka.