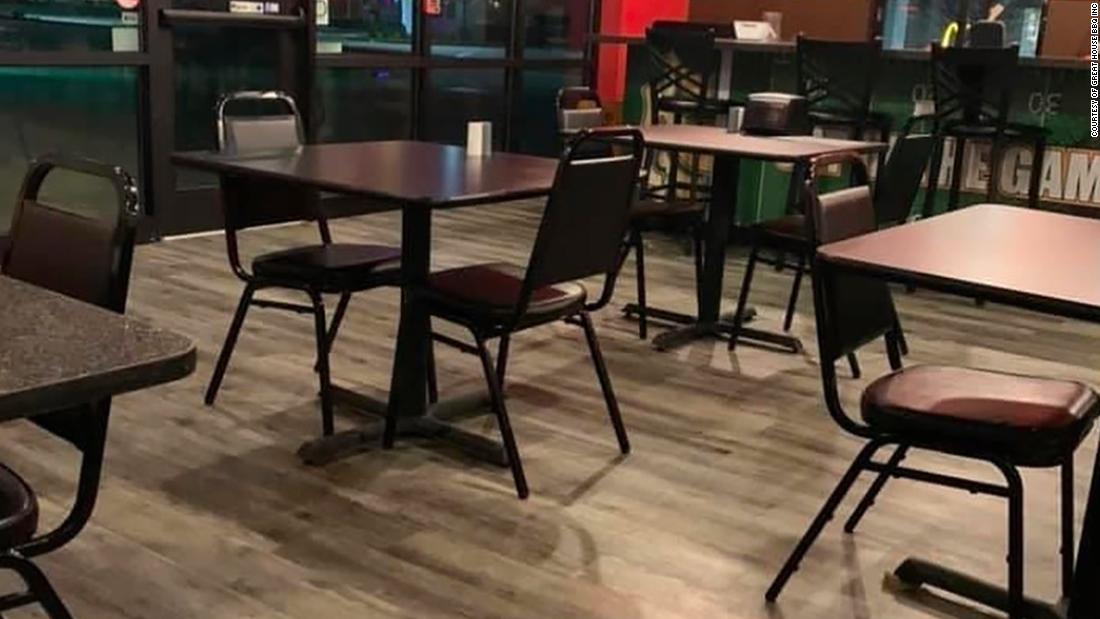 That kind of generosity is what has helped Renatta Frazier stave off eviction for Great House BBQ, her restaurant in Springfield, Illinois.

She was able to pay off much of the back rent she owed thanks to donations from a GoFundMe campaign started by her friend and customer Dusty Rhodes. It has raised nearly $3,000 of its $5,000 goal since it was started on January 10. Plus, she received a separate large donation from someone who learned about Frazier’s plight from that campaign.

While the restaurant is fairly new — it opened in the fall of 2019 — it has gained a following thanks to the quality of its Chicago-style barbeque and Southern side dishes based on recipes from Frazier’s aunts, grandmother and great-grandmother.

“Everyone I’ve taken or sent there has had a religious experience,” Rhodes said, noting that a food writer friend was blown away by Frazier’s fried mac-and-cheese balls. She’s also witnessed firefighters lining up for dinner to go. “They know their meat,” Rhodes said.

Some of the goodwill for Great House BBQ may also have been generated by the fact that Frazier decided to provide free hot lunches for children in the neighborhood when schools closed due to the pandemic.

While she still hasn’t been able to hire back any of the seven staffers she had to let go when shutdown orders closed the restaurant for almost three months, she and three of her children — who are partners in the business — are keeping operations going for now.

But Frazier is very hopeful for the future, thanks to the growth in her customer base over the past year and the support she has received.

“I greatly trust and believe there is a God and a universe that is limitless… They work through wonderful, amazing, generous people,” Frazier said.

Help for a fresh start after a fire

Like many business owners, Sally Jo Ocasio saw her revenue drop sharply during the shutdown months in the spring. But business at her Ridgway, Colorado, vintage store, The Vault, rebounded somewhat over a busy summer.

She had been looking for a larger retail space and found one just across the street in an early 1900s picturesque building.

She reopened in the new space in mid-December. But two days later, a fire consumed the building, destroying her store and all her inventory, Ocasio said.

When asked by a local paper if she would start a GoFundMe campaign, Ocasio said she didn’t want to because the past year was such a hardship for so many people.

Erin Graham, an owner of a nearby office supply store who is also one of Ocasio’s customers, decided she wanted to help. Without telling Ocasio, Graham and her husband started a GoFundMe campaign for The Vault. It has raised nearly $18,000 so far.

“It’s overwhelming. … It filled my heart with enormous gratitude,” Ocasio said, noting that since Ridgway is such a small town she knows many of the donors.

She has a lot of expenses ahead — including rent on her three-year lease, hiring a lawyer to help her figure out just what insurance will and won’t cover, and the cost of rebuilding her business.

Ocasio doesn’t want to use the money raised for her very near-term expenses, like hiring a lawyer. Instead, she said, she will put it toward an eventual reopening of The Vault.

Students step up for a beloved deli

Minho Kim knows the names of all the students who come to his deli, Sunny’s (or, as it is more popularly known, Harry’s), which is located near the K-12 Packer Collegiate Institute in Brooklyn Heights, New York.

A big menu favorite for them: Kim’s bacon, egg and cheese sandwiches.

And those students are loyal customers, even after they graduate. (During CNN Business’ phone conversation with Kim, whose customers call him “Joe,” a Packer grad named Justin stopped in just to say hello.)

Their loyalty is apparent in the more than $20,000 raised for Kim after he reluctantly started a GoFundMe campaign to help with his back rent and other bills, which kept ballooning as his revenue fell by 70% due to the pandemic. He still is in arrears on his utility bills.

He also promoted the campaign on his Facebook and Instagram accounts. In just a few days, the money came pouring in from students past and present, as well as Packer faculty members.

“Ninety-five percent of the donations came from longtime customers … Kids I’ve known since kindergarten,” Kim said. “I was really, really surprised. It almost made me cry.”

One student, Bella Pitman, even created art of Kim’s deli for stickers she sold and she gave all the proceeds to Kim.

In mid-December, Steve Olsen, the owner of the West Bank Café near Manhattan’s theater district, was two weeks away from shutting his doors.

But one of his many longtime customers, off-Broadway producer Tom D’Angora wouldn’t hear of it.

D’Angora and his husband, Michael, teamed up with actor Tim Guinee and writer and performer Joe Iconis, and sprung into action.

Through a GoFundMe campaign, promotion on social media, and a star-studded live-streamed telethon on Christmas Day, their efforts raised $342,000.

Most of the funds came from small donations. “We’re a community that’s been out of work since March. You generously saw members of the theater community giving whatever they could. A bunch of people giving a little bit can really make a difference,” D’Angora said.

Olsen is beyond touched. “The support is amazing. It’s a miracle,” he said.

But D’Angora isn’t surprised. “Steve Olsen goes to every table and sits down with customers. He treats me as well as Al Pacino. No matter who you are, you’re treated as family,” he said.

And that family is huge since the restaurant — which is an institution for the New York theater community and residents of midtown Manhattan — has been around for 42 years.

When he first opened the West Bank Cafe in 1978, Olsen said, “I told my staff, ‘They’ll come for food, but they’ll return for the hospitality if you treat them nice.'”

And, as their recent support has shown, they’ll be there when the chips are down.

“He treated me like a star and VIP from Day One. He treated me as well 15 years ago as he did today after raising $300,000 for him,” D’Angora said. “I told him, ‘This is your George Bailey moment. No man is a failure who has friends.'”