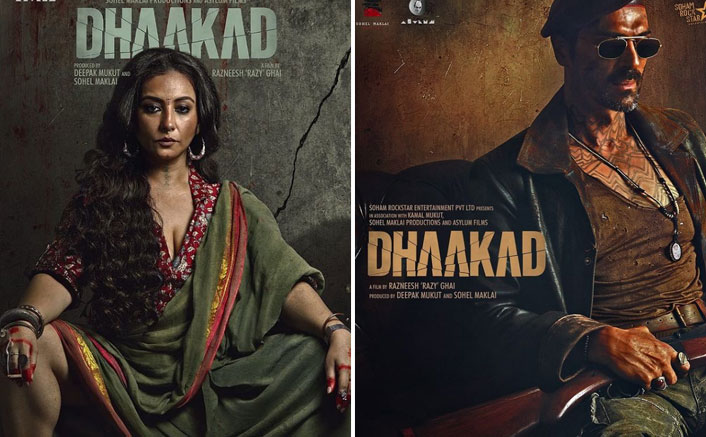 Kangana Ranaut’s Dhaakad has been in the headlines over the past week as the team has been making big revelations including the release date and the first looks. Most recently after Kangana’s poster, the team also released the first look posters for Arjun Rampal and Divya Dutta, both rocking their unusual avatars. The posters have today made it to Koimoi’s exclusive How’s The Hype section. Scroll below to know more and also do not forget to vote.

Dhaakad starring Kangana Ranaut, Divya Dutta and Arjun Rampal is an action thriller that promises power-packed punches. In the first look poster, Divya Dutta can be seen in a never seen before avatar, rocking a fusion of boho and Indian traditional, she is giving the ultimate bada** vibes. Talking about Arjun Rampal’s look, he is as evil as it gets. Worn out attire and a chest full of tattoos, Rampal is amid all the grim possible.

Rate the hype for the character posters below:

Dhaakad Poster Ft. Kangana Ranaut With A Sword On ‘How’s The Hype?’: Blockbuster Or Lacklustre?

After a long break post releasing the official teaser, one major update on Dhaakad came in, a couple of days ago. Kangana Ranaut herself took to social media and shared the new poster of the movie.

Speaking of the poster, Kangana looked more brutal and fierce than the very first one that was released back in 2019. This time, she’s seen with a sword in her hand charged up for a fight. There’s a lot of bloodshed in the picture itself, so we wonder how spine chilling the overall package is going to be.

Along with the poster, Dhaakad’s new release date was also unveiled. Earlier, the movie was slated for a Diwali 2020 arrival. Now, it will be releasing on 1st October 2021.

Dhaakad Teaser On ‘How’s The Hype?’: Blockbuster Or Lacklustre?

It gives a glimpse into the fierce action vibe of the film. In the 45 second teaser, Kangana can be seen shooting point blank, and her fearless body language and unapologetic daring approach is bound to create a lot of excitement. Check out the teaser here:

Scheduled to release on Diwali 2020, Dhaakad will be mounted on a large scale, shot across multiple locations India and overseas and will feature many high-octane sequences. The film will be made on a lavish budget which will rival any mega entertainer made in Indian cinema. Not only that, the makers have also met action directors from Hong Kong and Thailand for training Kangana for Gun Fu; which is a mix of martial arts and gun sequence.

Before the film releases, rate the hype of the teaser below.

Dhaakad Posters On ‘How’s The Hype?’: BLOCKBUSTER Or Lacklustre?

Kangana Ranaut is known for her epic female oriented roles and in her next film Dhaakad she will be seen picking up swords and will depict women power. She is best known for doing movies like Manikarnika, Queen to name a few. Now recently the posters of her next film Dhaakad was out where she can be seen in feisty, fierce and ready to fight avatar.

In the poster of Dhaakad, we can see the powerful Kangana in an action combat scene doting a total warrior look.

The project is helmed by Razneesh “Razy” Ghai and is jointly produced by Sohel Maklai Productions and Asylum Films and co-produced by Qyuki Digital Media.

Well, before the film releases, rate the hype in the poll below to add up to the overall buzz of the first look!