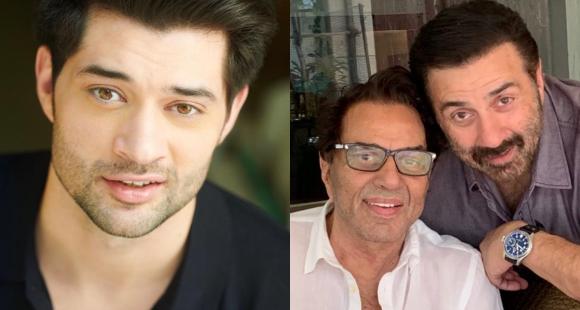 Dharmendra, a proud grandfather, has shared the good news that his grandson will be soon making his Bollywood debut with Sooraj Barjatya’s son Avnish. The film’s title is yet to be finalized.

Veteran actor Dharmendra’s grandson and son of actor Sunny Deol, Rajveer Deol, is all set to make his debut in Bollywood. The information was revealed by none other than Dharmendra who took to his official Twitter handle to make an announcement. Sharing the information, Dharmendra mentioned that Rajveer Deol will be making his debut with Rajshri Productions and Sooraj Barjatya”s son Avnish. They have been signed for a film which will be dealing with love and relationships in today’s world.

Dharmendra tweeted, “Introducing my grandson #RajveerDeol to the world of cinema along with #Avnishbarjatya directorial debut. I humbly request you all to shower the same love and affection for both the kids as you have for me. Good luck and Godbless.” Proud father Sunny Deol also tweeted, “My son Rajveer starts his journey as an actor. Rajshri Productions proudly announces the collaboration of Rajveer Deol and Avnish Barjatya is a coming-of-age love story. A beautiful journey awaits ahead.”

Rajveer Deol has studied theatre in the UK and also worked as an assistant director. Rajshri Productions also shared the news on its official Instagram page. It will be really interesting to see the second Deol on screen.