Home EntertainmentGossips Dia Mirza amps up her style quotient in a white dress as she gets papped in city amid wedding rumours; PHOTOS

Dia Mirza amps up her style quotient in a white dress as she gets papped in city amid wedding rumours; PHOTOS 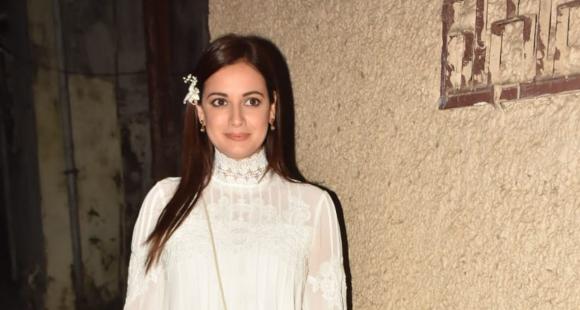 Dia Mirza is reportedly tying the knot with her businessman beau Vaibhav Rekhi on February 15 in a close-knit ceremony. Amid her marriage rumours, the actress stepped out in the city with her friends.

Dia Mirza amps up her style quotient in a white dress as she gets papped in city amid wedding rumours; PHOTOS

The gorgeous Dia Mirza is one of the most elegant actresses in Bollywood and there is no denying that. The actress won zillions of hearts with her brilliant stint in her debut film Rehnaa Hai Terre Dil Mein. Besides her acting prowess, the diva is adored for her utter beauty and flawless looks. Recently, Dia is in the news for her wedding rumours with businessman Vaibhav Rekhi. As per reports, it said that the actress will tie the knot with her boyfriend Vaibhav on February 15 in a close-knit ceremony.

Amid her wedding rumours, Dia was recently spotted by the shutterbugs as she goes out and about in the city with her friends. In the photos, we can see her wearing a lovely white dress, and needless to say, she looked drop-dead gorgeous. Dia complemented her look with a stylish bag that perfectly goes by her dress. In the photos, Dia can be seen happily posing for paparazzi and was seen all smiles. To amp up her look, the Tumko Na Bhool Paayenge star opted for subtle makeup and can be seen wearing light brown lipstick. With her tresses left open, Dia took the fashion game a notch higher.

Take a look at Dia Mirza’s pictures below: Meanwhile, Pinkvilla has exclusively learned that Dia and Vaibhav’s wedding will be attended by their families and the actress” close pals from Bollywood. A source close to the development revealed to us, “Dia’s closest friends from Bollywood will attend her wedding. Overall there will be less than 50 people in attendance, invites for which have already been rolled out. She will get married in a traditional ceremony, but a registrar will also be going to her residence for registering the marriage. There won’t be any sangeet function, but both the families plan to get together before the wedding and spend some quality time.”

Also Read: EXCLUSIVE: Dia Mirza & Vaibhav Rekhi to get married in a traditional ceremony, no Sangeet function in the plan