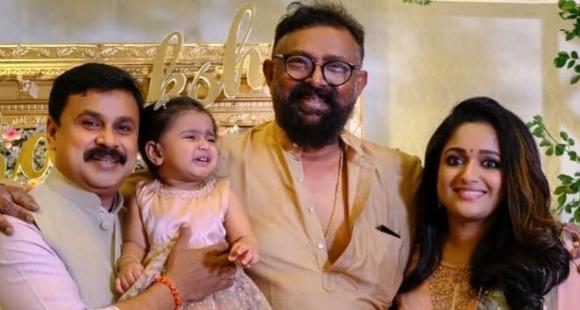 Kavya looked stunning in a black dress paired with a red dupatta, while Dileep was clicked in a printed kurta set. Dileep and Kavya Madhavan were recently spotted at a wedding and their stunning photos have surfaced on social media. Kavya looked stunning in a black dress paired with a red dupatta while Dileep was clicked in a printed kurta set. The actress was clicked as she walked holding Dileep”s hand and the couple was all smiles for the shutterbugs. The couple also attended a wedding reception of their close friend’s daughter and their photos have gone viral on social media.

Apparently, Mohanlal and other few Malayalam biggies were also present at the wedding. Dileep got married to Kavya Madhavan in 2016. This is his second marriage after he parted ways from his first wife, actress Manju Warrier. The duo ended their 17 years of marriage in 2015. Dileep’s daughter Meenakshi from the previous marriage is currently living with the actor. Meanwhile, check out their latest photos from the wedding below.

Also Read: Dileep’s daughter Meenakshi, actress Namitha Pramod get decked up and have a gala time at friend’s engagement

Dileep and Kavya Madhavan have a daughter together, who was born in October 2018. However, the couple introduced to their daughter only last year as his daughter turned one. Sharing a family picture, Dileep wrote on Instagram, “Mahalakshmi with her grandmother, mother and elder sister and father on her first birthday.