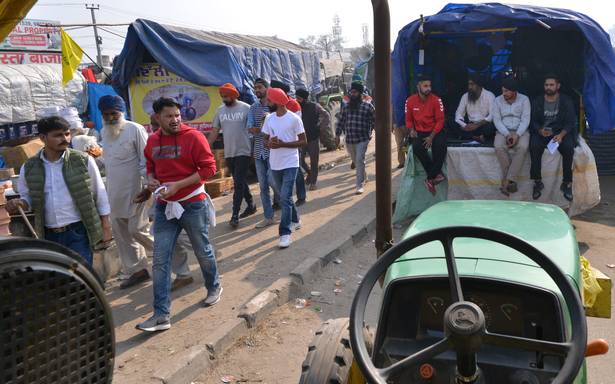 Union Minister for Agriculture and Farmers’ Welfare Narendra Singh Tomar on Thursday made an appeal to the farmer union leaders to consider the proposals sent by the Central government and continue the dialogue. He was holding a press briefing with the Union Minister for Consumer Affairs, Food and Public Distribution Piyush Goyal on the matter.

Saying that he was “pained” to see that the farmers were not able to take decisions despite all their doubts being addressed by the government, Mr. Tomar said the government was ready for talks with the farmers with an “open mind”. He added that farmers should soon decide on the next date of talks.

Mr. Tomar said the farmer unions should give up the path of agitation since it was not correct to intensify the stir when talks were on. He said that he was “hopeful” of a solution to the matter.

On any possibility of the withdrawal of the three contentious laws, Mr. Tomar said that no law was “completely bad”. He reiterated that the government was “ready to discuss with an open mind” any provisions that the farmers felt were against them.

Mr. Goyal said the government was “very, very open and flexible” to find amicable solutions to the issues raised by farmers. “We make an honest appeal to the union leaders to allow farmers to return back to their villages and continue dialogue with the government to dispel any apprehensions,” said Mr. Goyal.

Explainer | Why are the Agriculture Bills being opposed

In reply to a question, Mr. Goyal said the media should use its “investigative skills” to find out whether farmers were being misled.

We haven’t shut the doors: farmers

Responding to the Central government’s appeal to continue the dialogue on farm laws, the Samyukt Kisan Morcha leaders said they too had not “shut the doors” for talks but the government must come with a concrete proposal.

Addressing a press conference at Singhu border here, Bharatiya Kisan Union (R)president Balbir Singh Rajewal said that proposals sent by the government on Wednesday were discussed several times before and there was nothing new in them. He said the farmer unions too had not “shut the doors” for the talks, but the government must come with concrete proposal.

Mr. Rajewal said the ministers had conceded in the press briefing that the laws were made for “trade and commerce”. He said the three farm laws were “unconstitutional” since agriculture was a state subject.

Krantikari Kisan Union president Darshan Pal said the farmer unions were against the privatisation of the agriculture and never demanded these laws in the first place.