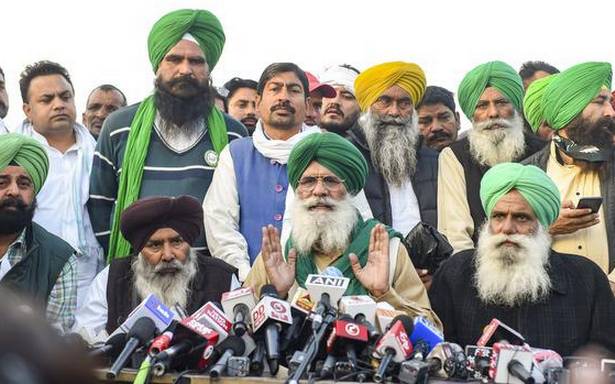 The Punjab and Haryana unions held an internal consultation on Sunday morning, and decided they would stay put at the Singhu and Tikri border crossing points

Farmers’ groups have rejected the Home Minister’s conditional invitation for talks, saying they will not shift to the designated protest grounds in Burari for now. Tens of thousands of farmers, mostly from Punjab and Haryana, remain parked at the borders of Delhi, demanding the repeal of the Centre’s three agricultural reform laws and withdrawal of an electricity Bill.

In a letter dated November 28, Union Home Secretary Ajay Bhalla wrote to 31 farmers’ unions from Punjab, reiterating Home Minister Amit Shah’s late night appeal to farmers to move to the grounds in northeastern Delhi, following which they would be called for a meeting by the Centre. “If you shift to the Burari grounds, then the very next day the Centre government will hold talks with you, with a high level committee of Union Ministers at Vigyan Bhavan,” said the letter.

The Punjab and Haryana unions held an internal consultation on Sunday morning, and decided they would stay put at the Singhu and Tikri border crossing points. Some demanded that the Centre allow them to protest at the high-profile Jantar Mantar site near Parliament rather than shunting them off to the Burari grounds on the outskirts of the city.

“Instead of responding to the main demands of repealing of three black laws and the withdrawal of the Electricity Bill 2020, the government is doing its best to move the debate to where the farmers should camp,” said a statement from the All India Kisan Sangharsh Coordination Committee, one of the alliances leading the protest, which includes ten of the Punjab unions.

“The government, if it is serious about addressing the demands of the farmers, should stop laying down any conditions (“you move to Burari Grounds in a ‘structured way’ and then we will start a dialogue the next day”), should stop assuming that the dialogue can be about “an explanation to farmers about the benefits of the Acts” and should come straight out with a proposal about the solution it is offering. The farmers are clear about their demands,” said the statement.