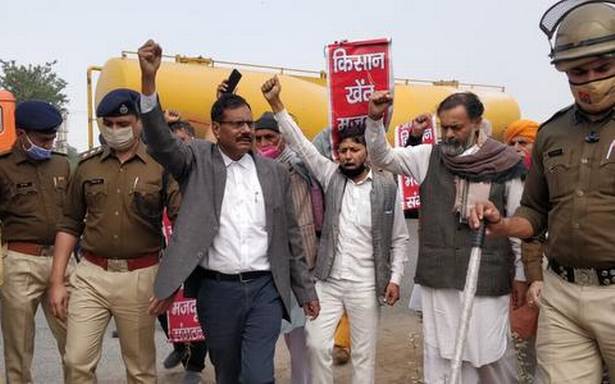 Swaraj India national president Yogendra Yadav was on Thursday taken into preventive custody in Rathiwas village here off National Highway-48, along with a dozen farmer leaders and protesters.

He was on his way to Delhi in response to the “Dilli Chalo” protest against the three farm laws.

Speaking to reporters, Mr. Yadav said that it was a moment of pride for all those being detained and arrested for the protest against the three black farm laws. “It is an irony that the farmers are being deprived of their basic constitutional right to go to the national capital and protest on Constitution Day,” said Mr. Yadav, amid slogans seeking to repeal the three “anti-farmer” laws.

He said that all farmers were standing united with the Punjab farmers, who were fighting for the entire farming community and not for themselves.

Earlier, in a tweet, Mr. Yadav said that many farmer leaders in Haryana were placed under house arrest and vehicles carrying farmers were being stopped. He alleged that there were reports of farmer batches being stopped from marching towards Delhi across the State.

IPL 2021: “Suryakumar Yadav will be the highest run-scorer for the Mumbai Indians” –...