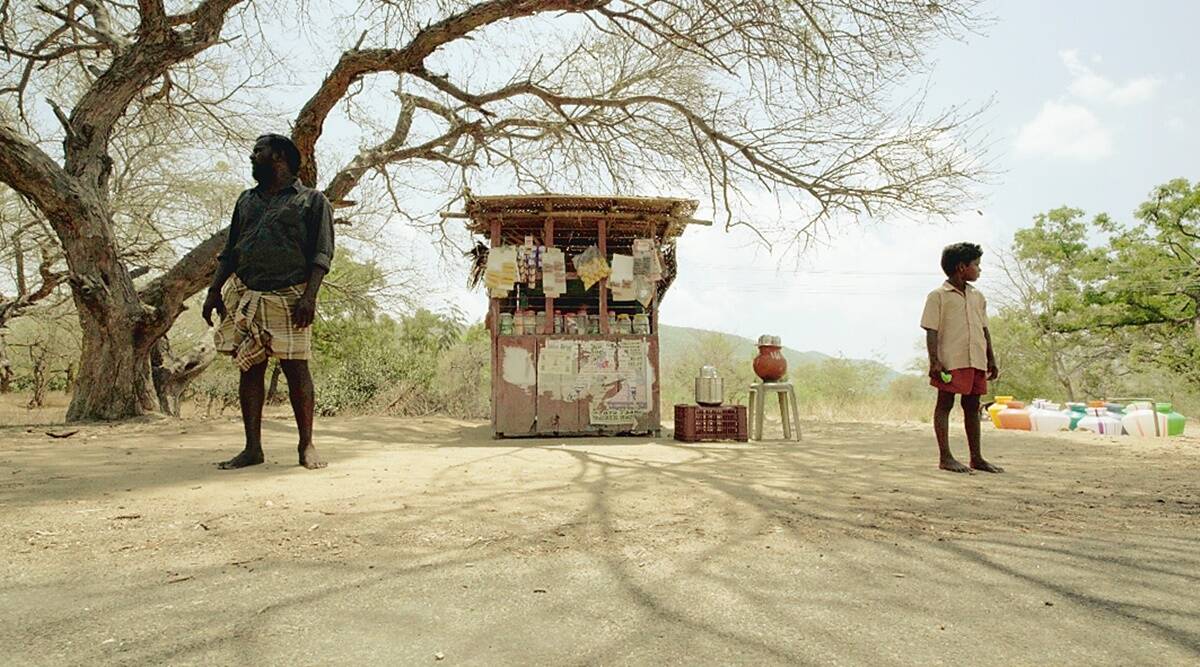 Sometime in 2015, the mother of a two-year-old was beaten up and thrown out of the house by her alcoholic husband in the middle of the night, in a village near Melur in Madurai. She walked 13 km to her parents’ home carrying the child.

On Sunday, a film inspired by her story won the Tiger Award, the top honour at the recently concluded 50th edition of the International Film Festival Rotterdam 2021. The director of the film Koozhangal (Pebbles) is the woman’s elder brother, P S Vinothraj. She has a cameo, appearing in a hazy dream sequence. While the two lost their father at the age of nine, their mother is a street-vendor in Madurai town.

Pebbles became the first Tamil film and only the second Indian film, after Sanal Kumar Sasidharan’s S Durga, to get the Tiger Award, with Vinothraj winning in his debut effort. Pebbles is also the first movie project for cinematographers Vignesh Kumily and G Parthib, and editor Ganesh Siva.

The Rotterdam festival is considered the world’s most prestigious festival for experimental films. Tiger Award carries a prize money of about 40,000 Euros.

Vinothraj says what happened to his sister, her long walk with the child, “disturbed” him, particularly the fact that he couldn’t question her husband. “I wasn’t able to do anything… I couldn’t tell her anything,” he says, apart from maybe once to “forget it”, that her child would ease her suffering.

Produced by prominent actor Nayanthara and her partner Vignesh Shivan, Pebbles features a man and his son taking a long walk through a parched stretch of rural Tamil Nadu to bring back the wife he had turned out of home a few days ago. “To convince her, he takes his son too. Maybe not only due to his guilt or love for her but also because he needs a woman to cook, raise his child and take care of the house… In the movie, I made him walk all the way.” The film captures the discord between the father and son, one angry, the other hurt.

The official synopsis of the film talks about how while their relationship is deeply disturbing, the two are “inexorably drawn together”. “It seems next to impossible that the still-innocent boy will go down the same path his father did. Their pointless journey illustrates the disruptive influence of grinding poverty.”

The festival jury described the film as “a lesson in pure cinema”, saying that while it dealt with a remote part of the world, it captivated them for its “beauty and humour”.

Talking about his struggle, Vinothraj says he assisted with several short film projects and a feature film before a short stint with the Manal Magudi theatre group in Kovilpatti in south Tamil Nadu proved fateful. “Manal Magudi is led by the acclaimed theatre director and writer Murugu Boopathy. I travelled across India as part of their three plays. If I have tried to capture the life and inner journey of people in this film, the entire credit goes to the lessons of storytelling I acquired from Manal Magudi.”

But Pebbles found no takers for a long time, till Tamil film director Ram came to his help. Nayantara and Sivan gave the green signal straight away, Vinothraj says, after seeing the footage they had shot.

Karuthadayan, who plays the father in Pebbles, is a theatre actor from a village near Melur.

Vinothraj says his role is an attempt to capture the inner journey of the father, the changes he undergoes, as he walks through bush and rocks.

A rough cut was recently screened by Vinothraj at his Madurai home, with all his family members, including his sister, and neighbours present. “She cried. Many of them cried, elder women, everyone… Some said they saw their own life in the movie,” he says.

Like in reel, in real life too, there have been gradual changes, he says. “But, in a larger way, I do not know if I can say my sister’s life has changed. In fact, that is how lives are, isn’t it?”