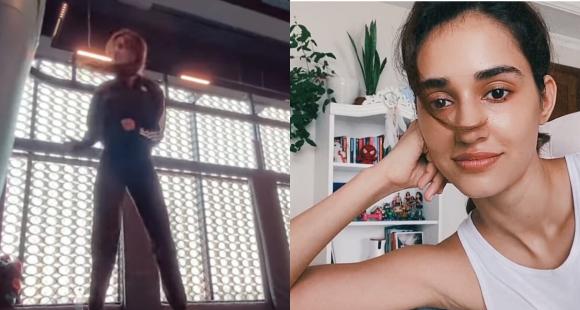 Disha Patani took to social media to share a snippet of her gym session post her cheat day. The gorgeous star also flaunted her love for the K-pop star band, BTS with the post and left Tiger Shroff in awe.

Actress Disha Patani recently sent her fans into a food coma as she gave all a glimpse of what her cheat day meal looks like. From relishing on sugary treats to devouring her favourite desserts, Disha binged on several yummy sweets and shared snippets on social media. However, after enjoying a day of cheating on her diet, the actress was quick to burn off those calories at the gym and today, shared a glimpse of what her post cheat day session at the gym looks like. And guess what, she found a perfect jam in BTS song, Mic Drop for her workout.

Taking to her Instagram handle, Disha shared a video of herself acing a flying kick at the gym. Clad in a pair of tights with a zipper, Disha is seen running from a distance and kicking a boxing bag. The star is seen acing it perfectly and landing on her feet comfortably after the kick. Sharing the video, Disha added the song by the K-pop band, BTS in the background and once again proved herself to be a BTS stan. Not just this, her rumoured beau Tiger could not resist liking the video.

Sharing the video, Disha wrote, “Post cheat be like.” The video went viral among Disha”s fans and the star left everyone in awe with her dedication to fitness.

Also Read|Disha Patani proves she’s a K Pop fan as she works out while listening to Kai’s ‘Reason’; WATCH Video