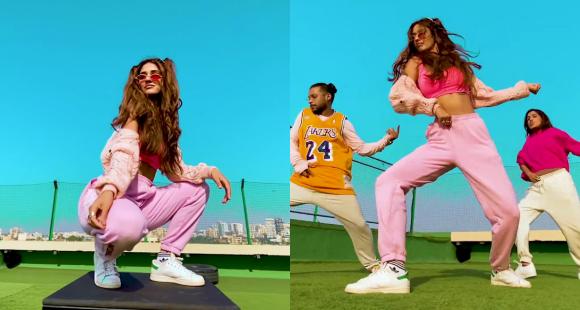 Disha Patani, who often drops dance covers on her YouTube channel, has shared a routine on a popular remix version of the 80s song Mere Naseeb Mein. The Radhe star surely will get you grooving with her smooth moves.

If there is one star who can set the internet on fire with her sultry looks as well as her groovy movies, it is Disha Patani. The Malang star is one of the leading ladies who never fail to surprise fans with their talent. From flaunting her makeup skills in tutorial videos to sharing her dance covers, Disha manages to keep her fans engaged in different ways. And now, she has shared a new dance video where she is seen grooving to the remix of an 80s song, Mere Naseeb Mein.

Taking to her Instagram handle earlier during the day, Disha had dropped a teaser of her dance cover video and now, she has shared the YouTube link where she is seen shaking a leg on the remix of the iconic song. The star is seen clad in a hot pink crop top with lavender sweat pants. She also added a cut out sweater and white sneakers to complete her outfit. With two ponytails and cool pair of sunglasses, Disha looked absolutely gorgeous.

In the video, she is joined by Dimple Kotecha and the routine is choreographed by Ankan Sen. The star wrote a small description in which she revealed that the song is her favourite. She wrote, “Hi everyone! Here”s a dance cover on one of my favourite song of the 80’s Mere Naseeb Mein! Had super fun dancing on this with my favourite dancing partner Dimple Kotecha. Choreographed by Ankan Sen. Videographer-Harikesh Kori.”

Take a look at the video:

Meanwhile, Disha has been spotted a couple of times in the city when she headed to the gym. On the work front, she was last seen in Aditya Roy Kapur, Anil Kapoor and Kunal Kemmu co-starrer Malang. Now, she will be seen in Radhe: Your Most Wanted Bhai with Salman Khan, Randeep Hooda and Jackie Shroff. Reportedly, she plays Jackie Shroff’s sister in the film. It is helmed by Prabhudheva and is slated to release on Eid 2021. Besides this, Disha also has Mohit Suri’s Ek Villain 2 with Arjun Kapoor, John Abraham and Tara Sutaria.

Also Read|PHOTOS: Disha Patani sports neon orange track pants as she heads to the gym ahead of the weekend