DNA Special: How protests are turning into profit-making industries 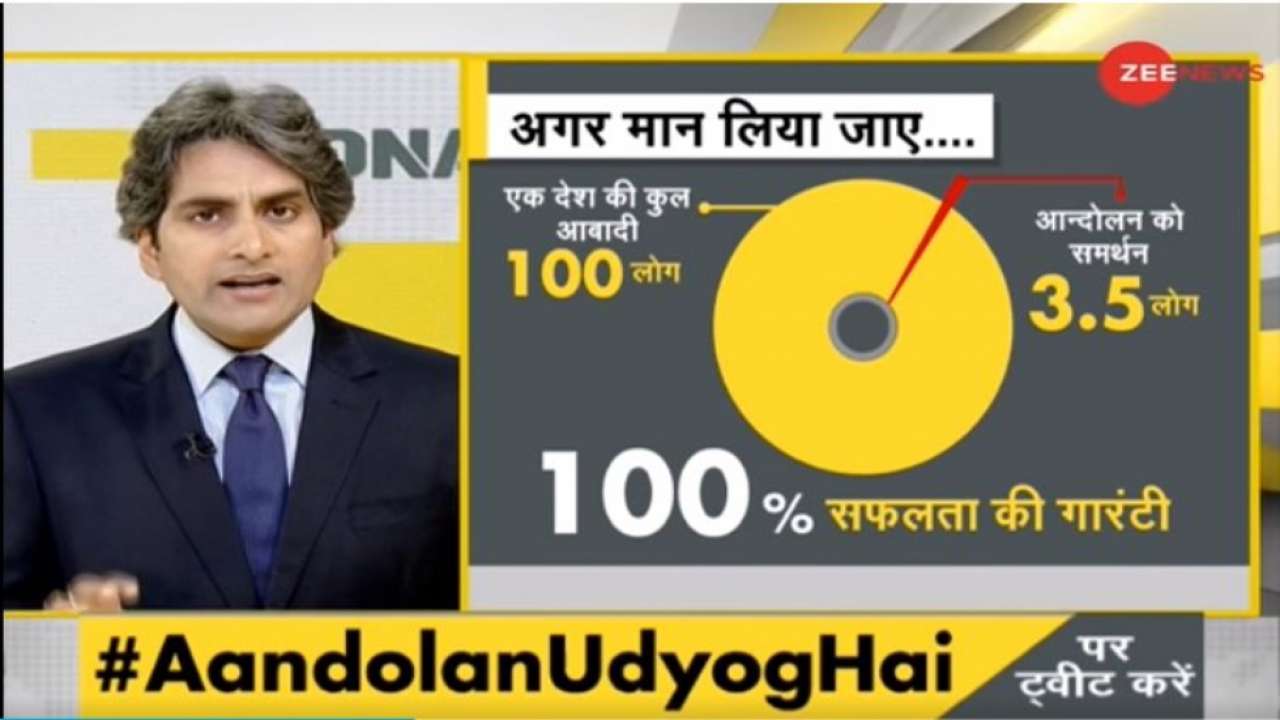 Do you know which is the fastest growing industry in India right now? It is the industry producing negativity in huge numbers and the consumption of such thoughts is also the highest in the country.  Similarly, the agitation has become very big and vast industry in the country and it is working in a very systematic manner. The movement has its own tool kit, marketing and event management companies.

Think about 10 years from now when someone will ask you what your child is doing? Perhaps you will say that your son is doing an MBA in Protest Management. It may also be that in the next few years, governments should constitute the Ministry of Movement Welfare like the Ministry of Agriculture and Farmers Welfare and a separate budget should be provided for this Ministry also. All this can happen and we think you should be ready for it.

According to research by Harvard University, any movement can be 100 per cent successful if 3.5 per cent of a country’s total population plays an active role in a movement.

That is, if it is assumed that the total population of a country is 100 and more than 3 of them are demonstrating on one subject, their movement will be successful. That means, three people will also impose their opinion on the remaining 97 people of the country and make or break laws.

Firstly you should understand how the movement has now become a business model and what is its toolkit?

The word ‘toolkit’ came up for discussion in the last week when Swedish environmental activist Greta Thunberg may have accidentally shared it on her Twitter account, which had an entire script of conspiracy against India.

In fact, the toolkit is a document that explains how support will be mobilized on social media during the agitation, what kind of hashtags will be used on Twitter, who will have to contact if there is a problem during demonstrations and what to do and what to do in a difficult situation? All this happens in a tool kit.

That is, some mechanic uses these tools to take the movement to the highway of falsehood and then try to gather crowds of people by spreading fake news.

This turns the movement into an event and the event management companies earn crores in its name. If the farmers understand this whole system in the context of the agitation, it can be the biggest example of protest management.

Tractors have become the face of the movement and around two lakh tractors are standing on the borders of Delhi. On an average, the price of a tractor varies from Rs 6 to 7 lakh.

According to this, there are tractors worth Rs 12, 000 crores on the borders of Delhi and ironically, those who have brought these tractors with them are being called poor farmers and the companies benefitting from them are earning huge.

The movement has also included a large number of public relation agencies, which take up to lakhs of rupees for an event. And now these companies are spreading lies about this movement internationally.

A large number of people are being assisted to control the mob. In the name of crowd management, many people are working in different shifts – who are being called volunteers who are adept in collecting donations.

Money like water is being poured out to create Tool Kits and PowerPoint Presentations.

NGOs are providing waterproof tents, arranging food, foot massager and washing machines. Celebrities and artistes are writing slogans and supporting the movement. International forces are being employed to make this event a success.

However, there are no free lunches in this world. So the farmers should understand that all those who are supporting them and their movement have some or the other ulterior motive.

Negative demonstrations in the form of farmers’ agitation:

1) The farmers’ movement has been hijacked by “Protest Entrepreneurs”.

2) The aim of this movement is not to revoke agricultural laws. Rather, the movement aims to end the legitimacy of the present central government and is confined to protests against Prime Minister Narendra Modi.

3) Logic and facts are being completely ignored.

4) The noise of falsehood is so high that the demand for truth has become very low. Nobody wants to know the truth.

5)  Tractors have been made weapons and it would not be wrong to say that tractors that simplify farming are now creating fear like tanks and AK 47 rifles in the minds of the people.

6) Farmers travelling in SUVs are being described as poor farmers.

7) The farmers who are being described as poor have succeeded in bringing the world’s big celebrities on their side and these celebrities have given their support to the farmers without reading about the agricultural laws. They also include the famous US pop singer Rihana and former adult star Mia Khalifa.

9) The farmers rejected several proposals to negotiate with the government, but despite this, fake news was spread.

10) The most point is that the aim of this movement is not to revoke agricultural laws because if it were to be, the farmers would respect the committee formed by the Supreme Court in the matter and the government’s proposal to put the laws on hold for one-and-a-half-years would have been accepted by the farmers. They did not do it and it shows that these movements are sponsored.