Doctors of AIIMS, other hospitals join IMA call for protest with black ribbons 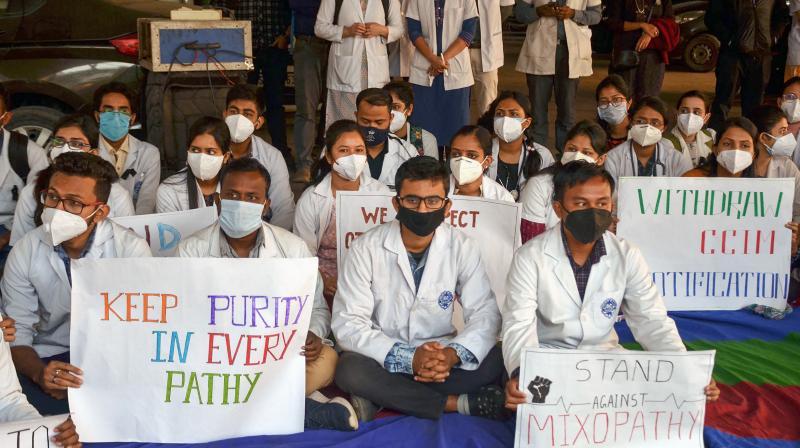 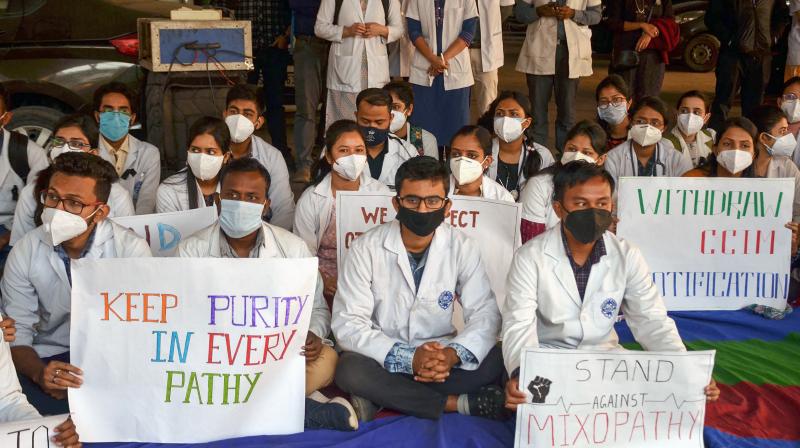 Members of Junior doctors’ Association stage a protest in solidarity with Indian Medical Association’s strike against Mixopathy and demanding the withdrawal of CCIM notification, at Guwahati Medical College and Hospital (GMCH) in Guwahati, Friday, Dec. 11, 2020. In the notification, Centre has allowed Post Graduate (PG) students of Ayurveda to perform a variety of general surgery including orthopedic, ophthalmology, ENT and dental procedures. (PTI)

New Delhi: Many doctors at several hospitals in the national capital, including AIIMS, on Friday sported black ribbons in support of the protest call of the IMA against the Centre’s move allowing post-graduate practitioners of Ayurveda to be trained in performing surgical procedures.

The Indian Medical Association (IMA), which had given the nation-wide call on December 1, has demanded withdrawal of the notification.

The Resident Doctors Association of AIIMS-Delhi, in a statement said, “This step will not only encourage already rampant quackery, but also undermine the safety of public. We request the government of India to retract this notification immediately”.

“We stand with our medical fraternity in this regard and support the strike called by Indian Medical Association,” it said.

Shivaji Deb Barman, president of FORDA, an apex bodies of various RDAs in Delhi, said, doctors in Delhi will observe black ribbon protest, but “will not withdraw any services”.

The IMA has given a call for withdrawal of non-essential and non-COVID services between 6 am and 6 pm on Friday to protest against the notification.

The notification by the Central Council of Indian Medicine (CCIM) to allow legal practice of surgeries by Ayurveda practitioners and the formation of four committees by NITI Aayog  for integration of all systems of medicine will only lead to “mixopathy”, the IMA has said.