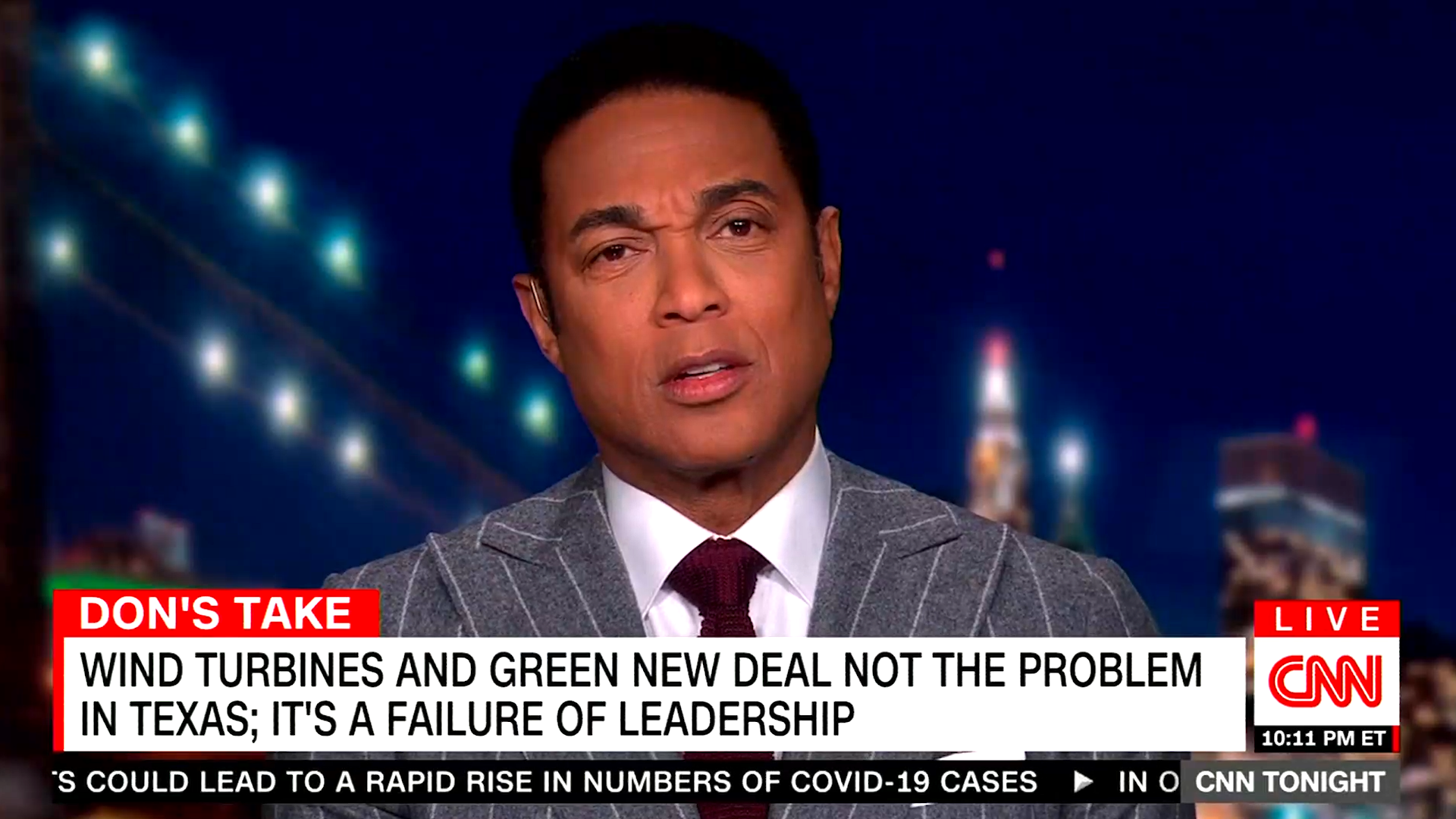 On CNN Tonight With Don Lemon Wednesday night, Texas Governor Greg Abbott was the target of Lemon’s ire for attempting to politicize the catastrophe that’s currently taking place in his state. Millions of Texans have been without power, heat or water for days as the state deals with historic, prolonged extreme cold. Conservative media was quick to blame the debacle on renewable energy, and Abbott went on Fox News Tuesday night to do the same.

“This shows how the Green New Deal would be a deadly deal for the United States of America,” Abbott said on Hannity, adding, “Our wind and our solar got shut down and they were collectively more than 10% of our power grid, and that thrust Texas into a situation where it was lacking power on a statewide basis.”

“Okay, so he told on himself right there,” Lemon responded. “Ten percent. Come on, man.”

According to the Electric Reliability Council of Texas, renewable energy was only projected to supply roughly 20% of power in Texas this winter, with the rest falling on natural gas, coal and to a lesser extent, nuclear power, all of which were rendered useless due to the extreme cold.

The majority of Texas runs on its own power grid, and it does so because decades ago, Texas lawmakers decided they didn’t want to have to abide by federal regulations, regulations that would have forced Texas to winterize its infrastructure, which likely would have averted the current crisis. Lemon was quick to point out both of these facts.

“What is failing right now is the majority of the power source, and that power comes from what? Oil and gas. Weatherizing this equipment is voluntary in Texas. And guess what, they didn’t choose that option,” Lemon said, later adding, “The governor is making this massive and very dangerous and deadly outage all about politics. Fossil fuel is necessary to heat homes. So, Governor Abbott, where is the fuel to heat homes all across Texas? Where is it?”

Lemon went on to lament the fact that Abbott felt comfortable even attempting to gaslight the country in such a way.

“Only in 2021 could we be told that in a state rich in energy—this is Texas, right? Oil country—that the root of the problem is wind or solar,” Lemon said. “And some people are just eating it up. Buying it. But it is a lie.”