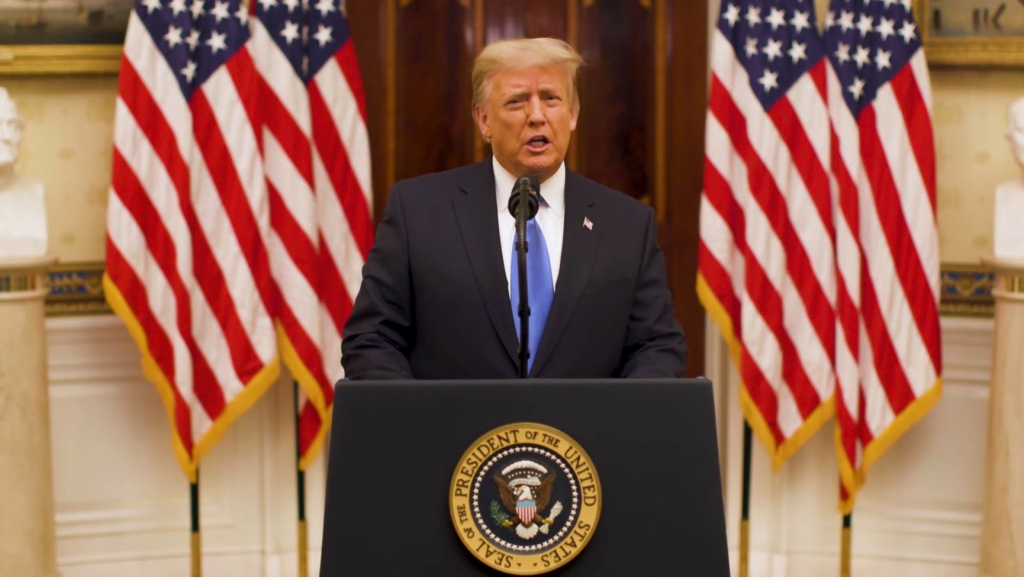 The White House released a farewell video from Donald Trump, in which he said that “we did what we came here to do, and so much more.”

“As I prepare to hand power over to a new administration at noon on Wednesday, I want you to know that the movement we started is only just beginning,” he said.  “There’s never been anything like it. The belief that a nation must serve its citizens will not dwindle but instead only grow stronger by the day.”

“This week we inaugurate a new administration and pray for its success in keeping America safe and prosperous,” Trump said. “We extend our best wishes, and also want them to have luck, a very important word.”

His remarks were a contrast to those that he made on Jan. 6, when he challenged Joe Biden’s victory and urged supporters to march to the Capitol. Pro-Trump rioters stormed the Capitol, temporarily halting Congress’ certification of the electoral vote. A week later, the House of Representatives impeached Trump for a second time.

Much of Trump’s speech today focused on thanking members of the administration and running through a list of accomplishments.

“To serve as your president has been an honor beyond privilege,” Trump said.

His nearly 20-minute speech was released just as Biden was arriving at Joint Base Andrews for inauguration ceremonies, after giving an emotional sendoff to friends and family in Delaware earlier in the day.

In his remarks, Trump said that he hoped his administration’s “greatest legacy” would be that “we put the American people back in charge of our country. We restored self-government. We restored the idea that in America no one is forgotten, because everyone matters and everyone has a voice. We fought for the principle that every citizen is entitled to equal dignity, equal treatment, and equal rights because we are all made equal by God. Everyone is entitled to be treated with respect, to have their voice heard, and to have their government listen.  You are loyal to your country, and my administration was always loyal to you.”

Trump has not said whether he will run for president again in 2024 — if he is able to. He faces a Senate impeachment trial on charges that he incited the siege on the Capitol, and Democrats have been calling for him to be barred from running for office again.

In his remarks, Trump attacked what he and other allies have referred to as “cancel culture.” Although he did not mention Twitter or Facebook by name, the tech giants have suspended his accounts in the wake of the attack on the Capitol.

“Only if we forget who we are, and how we got here, could we ever allow political censorship and blacklisting to take place in America,” Trump said. “It’s not even thinkable. Shutting down free and open debate violates our core values and most enduring traditions. In America, we don’t insist on absolute conformity or enforce rigid orthodoxies and punitive speech codes. We just don’t do that. America is not a timid nation of tame souls who need to be sheltered and protected from those with whom we disagree. That’s not who we are. It will never be who we are.”

Check out the full speech above.