Donald Trump left a secret note for Joe Biden in White House before leaving? Twitterati guesses what he wrote 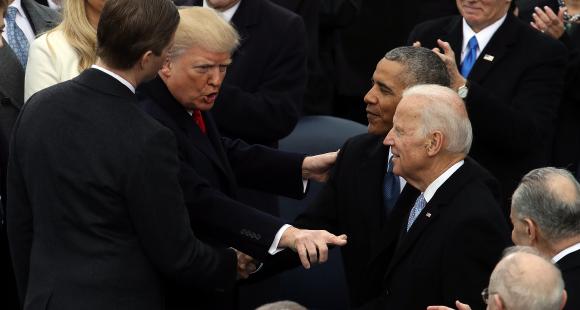 According to reports, Donald Trump has reportedly left a secret note for his successor and next POTUS Joe Biden before leaving the White House.

Donald Trump left a secret note for Joe Biden in White House before leaving? Twitterati guesses what he wrote

After the inauguration ceremony of Joe Biden and Kamala Harris, most of the United States was celebrating, most, except former President Donald Trump. It was recently reported by Washington Post that the previous President Donald Trump left a note for the new POTUS Joe Biden in the White House just moments before he left the premises today.

Washington Post reported that Josh Dawsey was one of the first to tweet the news out. “POTUS left a note for Joe Biden in the Oval, per White House spokesman,” he tweeted. Even though the contents of the alleged note are not public, yet, Twitterati is having a gala time guessing what Trump might have said in his note.

While one replied with: “Was it written with crayons,” another social media user guessed that the note might’ve said: “I destroyed the upstairs toilet, you”ve got to jiggle the handle. You have to flush 10, maybe 15 times.”

If you didn’t know, Donald Trump and Melania Trump were recently pictured leaving the White House by BBC, for the last time, as President and First Lady. Donald Trump left the White House to head to Joint Base Andrews, Maryland for a rally-type exit speech. He then boarded his flight for Florida, where he will be residing post-Presidency. Donald Trump has refused to attend the inauguration ceremony, after recently being impeached twice in his term. This is only the second time in American history that a sitting President has refused to attend the inauguration of his successor, last President to do so was Andrew Johnson in the 1800s.