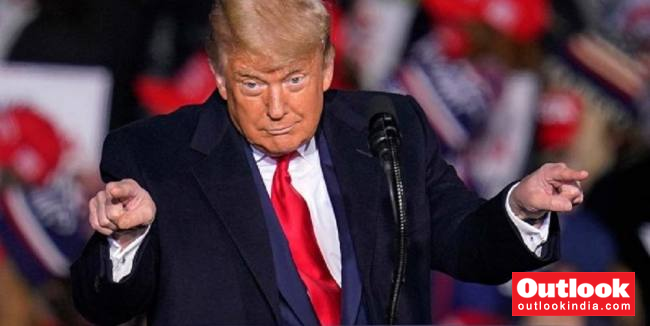 President Donald Trump has signed an executive order that prioritises Americans’ access to Covid-19 vaccines before the US potentially begins helping other nations.

American companies, he said, were the first to produce a verifiably safe and effective vaccine.

“Together, we will defeat the virus, and we will soon end the pandemic, and we will save millions and millions of lives, both in our country and all over the world. And we’ve already started,” Trump said during signing the executive order on Tuesday at a White House event celebrating ”Operation Warp Speed”, his administration’s effort to produce and distribute safe and effective vaccines for Covid-19.

Trump told reporters that his administration provided a total of USD 14 billion to accelerate coronavirus vaccine development and to manufacture all of the top candidates long in advance.

As a result of this “unprecedented investment”, both Pfizer and Moderna have announced that their vaccines are approximately 95 per cent effective, he said.

Pfizer has developed its vaccine outside of ”Operation Warp Speed”, but is collaborating with the US government on manufacturing and distribution.

The UK on Tuesday began its vaccinations with the first set of people injected with their first of two doses of the Pfizer/BioNTech jab.

The deadly virus has so far killed more than 285,000 Americans and some 1.5 million people worldwide.

As per the executive order, the Secretary of Health and Human Services is directed to provide priority access to Covid-19 vaccines to Americans.

“Through this action, Trump is putting the health and safety of Americans, the viability of our economy and the security of our nation first,” the White House said.

The US has led and will continue to lead the world’s public health and humanitarian response to the Covid-19 pandemic, it said.

The Trump administration is prepared to ship Covid-19 vaccine doses to every corner of America within 48 hours of the issuance of an Emergency Use Authorisation by the US Food and Drug Administration, the White House said.

Trump said more companies are in the pipeline of the vaccine announcement soon.

“We have some companies like Johnson & Johnson and others. They are all coming in, and they’re coming in very quickly. We expect to have some news on that very shortly. We have worked very well with the companies, but if for any reason we have any problems, we will be instituting the Defence Production Act, and we will make sure that we don’t have any problems for very long,” he said.

Johnson & Johnson is a one-dose, one-shot vaccine, he said, adding that all the vaccines are showing tremendous promise.

Trump said he is hopeful that the Food and Drug Administration (FDA) will authorise the Pfizer vaccine within days and Moderna vaccine almost immediately thereafter.

If these vaccines are authorised, tens of millions of vaccine doses will be available this month. “We will get it distributed very quickly. We have that all set. And hundreds of millions more will quickly follow,” he said.

“Every American who wants the vaccine will be able to get the vaccine,” Trump said, asserting that the plan put forward by his administration prioritises the elderly and patients with underlying conditions, as well as healthcare workers and first responders.

This will quickly and dramatically reduce deaths and hospitalisations, he noted.

“And within a short period of time, I think we want to get back to normal… get back to where we were a little more than nine months ago. We were doing incredibly. And in many respects, we’re still doing incredibly with our stock markets and everything else, which are hitting all new highs,” Trump said.

The President said his administration has already finalised a partnership with Walgreens and CVS and they will deliver vaccines directly to nursing homes as soon as the states request them to do so.

Asserting that the US is more prepared than ever before to confront the Covid-19 pandemic, the White House said the country will soon deliver vaccines that will help defeat the pandemic and help support the global return to prosperity.

In just seven months since the President coalesced the full power of the federal government, private sector and scientific community into ”Operation Warp Speed”, this once-in-a-generation effort has developed vaccines five times faster than any other vaccine in history, it said.

“Without cutting corners in safety or effectiveness, our nation is now on track to receive emergency use authorisation for two lifesaving Covid-19 vaccines by the end of the year,” the White House said.

Notably, officials from US President-elect Joe Biden’s transition team, which will oversee the bulk of the vaccination programme in the US once he takes office on January 20, were not invited to the White House event.