Dream catchers: Everything you need to know about these bohemian adornments 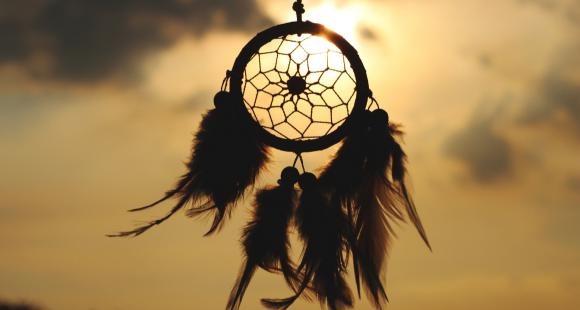 From encouraging positive dreams to trapping the bad ones, here are some ways in which dream catchers are believed to affect our dreams and thoughts.

Dream catchers: Everything you need to know about these bohemian adornments

Dream catchers are hands-down one of the most popular home decor items. They adorn the wall of every teenager’s room. They are pretty, bright and colourful in appearance and have a boho vibe to them. They are easy on the pocket and can be hung at any corner to instantly pep it up.

But when it comes to their actual usage, of influencing dreams, do they really work? There are many theories as to how dream catchers work their magic and how they positively affect our thoughts and dreams. Here are some ways in which dream catchers influence our dreams and our thought processes.

1. The centre of the dream catcher, that has the web inside a circle, is said to capture all the bad dreams and the negativity. While the feathers below it are said to encourage good and positive dreams.

2. Dream catchers are often perceived as a thing that protects children. They are usually hung over the bed to protect the children from evil spirits and nightmares while they are sleeping.

4. Dream catchers are believed by some to be totems that represent good energy. They help to neutralize bad energy and increase the positive energy in the room.

5. The beads that are next to the feathers in a dream catcher are said to symbolise the good dreams that could not pass through the web and thus became immortalised as sacred charms.

Also Read: EXCLUSIVE: Significance of plants and trees according to Vastu explained by an expert

“I could’ve put him over everywhere” – WWE legend on dream match with Stone...

Talking about Tiger 3, Emraan Hashmi says it was always a dream to work...

It would be a dream come true: Tom Holland on playing James Bond

Hold on to your Grapefruits, it’s time for pitchers and catchers