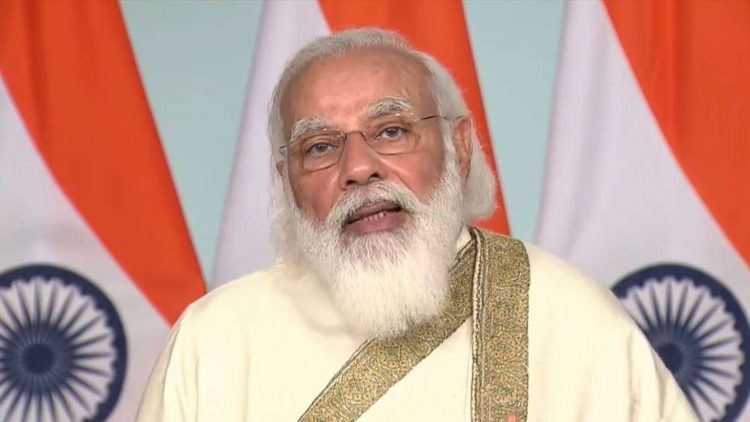 Prime Minister Narendra Modi said on Tuesday that his government was committed to ushering in development in the country without any discrimination on the basis of religion.

“I assure that nobody will be left out and not discriminated against on religious lines. Everyone will move forward by enjoying the Fundamental Rights given in the Constitution,” Modi said while addressing through videoconference the centenary celebrations of the Aligarh Muslim University in Aligarh in Uttar Pradesh.

He also said that the dropout rate of Muslim girl students has reduced due to government policies, adding that the Centre is deeply concerned about their education and empowerment.

“School dropout rate among Muslim girls was more than 70 per cent and this situation persisted for 70 years. In these circumstances, the government started Swachh Bharat Mission, built toilets in villages and toilets for school-going girls. Now the dropout rate from 70 per cent has fallen to nearly 30 per cent. The Central government is continuously working to reduce their dropout rates,” he said speaking at the centenary celebrations of Aligarh Muslim University on Tuesday.

“At AMU, the number of female students increased to 35 per cent. I want to congratulate you. Sarkaar ka Muslim betiyon ke shiksha aur shashaktikaran pe bahut dhyaan hai (The government is deeply concerned about education and empowerment of Muslim daughters). In the last six years, scholarships have been provided by the government to around 1 crore Muslim daughters,” he added.

He said that the country has moved forward in the direction of creation of the modern Muslim community after abolishing malpractice like triple talaq.

Modi is only the second Prime Minister to address an AMU function after Lal Bahadur Shastri 56 years ago.

The Prime Minister pointed out that during the nationwide lockdown due to coronavirus pandemic, the Union government did not discriminate against anyone and gave free food grains to 80 crore poor.

He said that the Union government had also got opened 40 crore bank accounts, given houses to 2 crore persons and built toilets for 10 crore others under the `Clean India Mission`.

The Prime Minister congratulated the university for increasing the number of female students to 35 per cent, adding that the government had provided 1 crore scholarships for such students.

Education leads to employment and entrepreneurship which in turn results in economic independence, he pointed out.

Modi said that during the pandemic, the AMU served the needy and even donated money in the PM-CARES fund to show their responsibility towards the nation.

Hailing the university for promoting diversity, the Prime Minister also said that it was one of the strengths of the country.

The AMU had helped India strengthen its relations with Muslim countries and nearly 1,000 foreign students were currently on its rolls. The Prime Minister said that the university should strengthen its soft power.

Modi said that the country was moving ahead after the ban on instant Triple Talaq.