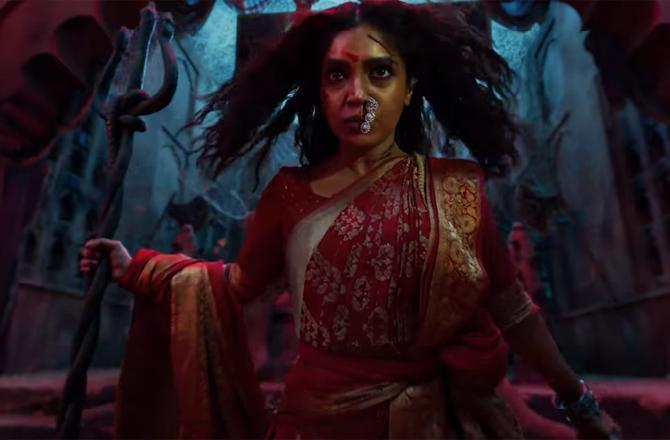 Bhumi Pednekar plays Chanchal Chauhan, who is in prison and who’s taken to a sprawling mansion called Durgamati Haveli. Mahie Gill is an investigating officer and Arshad Warsi is a powerful politician who cannot be touched. There’s a mysterious woman called Durgamati who’s spirit enters into the body of Chanchal.

This is the dense plot of Durgamati, the remake of the Telugu hit, Bhaagamathie, which starred Anushka Shetty. The first thing that engulfs you in its world is the stunning camerawork and some scary scenes that promise jump-scare moments. And as always, Bhumi Pednekar has immersed herself into a complex part.

The film is all set to premiere on December 11 on Amazon Prime Video India. It’s is directed by G Ashok produced by Akshay Kumar, Cape of Good Films, Bhushan Kumar, Krishna Kumar and Vikram Malhotra. The film is an Abudantia Entertainment and T-Series Production.

Earlier titled Durgavati, the film’s title went through a change, and talking about this thriller, Bhushan Kumar had something to say. Kumar said, “I am very excited to take DURGAMATI to its audience all over the world via Amazon Prime Video. Our collaboration with Abundantia Entertainment and Vikram has produced much-loved films like Baby and Airlift and I look forward to adding to that count”.

“I’m super excited about my upcoming film Durgamati and it’s an honour to play the lead in this conspiracy thriller.Being an ardent fan of spine-chilling thrillers myself, I was delighted to be a part of such a gripping story,” said Bhumi Pednekar. “Also, I am glad to collaborate with Akshay Sir again after 3 years and present this wonderful film for audiences across the world.”