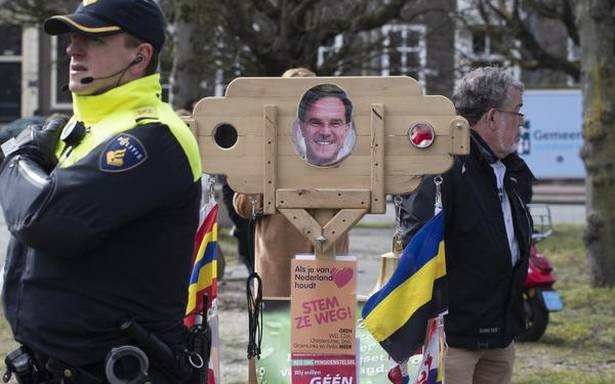 The Netherlands Prime Minister Mark Rutte — in power since 2010 and one of Europe’s longest serving leaders — is expected to emerge as head of his fourth coalition government owing to his steady handling of the pandemic.

The Netherlands begins three days of voting March 15 in a primary test of a European government’s coronavirus policies, with Prime Minister Mark Rutte set to win another term in office.

With the country under its tightest COVID-19 restrictions including an overnight curfew, polling stations will open mainly for at-risk people on March 15 and 16 before the main election day on March 17.

Police used water cannon to break up anti-Rutte protests on the eve of voting, and riots against the introduction of the country’s first curfew since World War II rocked the Netherlands in January.

But, Mr. Rutte — in power since 2010 and one of Europe’s longest serving leaders — is expected to emerge as head of his fourth coalition government owing to his steady handling of the pandemic.

It has drowned out previously dominant issues such as immigration, and opinion polls show Mr. Rutte’s liberal VVD (People’s Party for Freedom and Democracy) party with around 25% of the vote.

“It seems that right-wing voters really like the VVD and Rutte or particularly actually the Prime Minister,” Andre Krouwel, who teaches political science at the Vrije Universiteit Amsterdam, told AFP.

“So they’re getting not only what we call the ‘Prime Minister bonus’, that being in the office of Prime Minister provides, but also the ‘corona bonus’, because he was the spokesman during the pandemic.”

Mr. Rutte is far ahead of his closest rival, the anti-Islam PVV (Freedom Party) of Geert Wilders, which is on around 13%, making it likely to remain the second biggest party in parliament.

Dutch authorities have urged the elderly and people who are vulnerable to coronavirus to vote early, with most people including party leaders expected to wait until March 17 to cast their ballots.

Exceptions to the 9 p.m. to 4.30 a.m. curfew will be made over the next three days so people can vote “without hindrance”, Mr. Rutte said last week.

His coalition partners, the conservative Christian Democratic Appeal (CDA) and Christian Union, are vying for third place in the election, meaning they could likely return to government too.

But with a large group of others including the Greens (GroenLinks) not far behind, the shape of any eventual coalition remains uncertain — and after the last elections in 2017, coalition talks took seven months.

Voters said however that the key issue was the government’s response to the coronavirus pandemic — initially liberal but increasingly tough restrictions, and a slow start to vaccination.

Dubbed the “Teflon” premier for emerging unscathed from crises, Mr. Rutte recently shrugged off the fact that he had to resign in January over a scandal in which thousands of parents were falsely accused of scamming childcare.

He has since continued in a caretaker role.

‘A lot of scandals’

“The liberal party VVD has been in government for a while and I think it has had a lot of scandals, which they might have not survived if the coronavirus wasn’t here,” student Floris van Dedem, 22, told AFP in The Hague.

“I don’t think they could have had as many seats if the coronavirus wasn’t around.”

Other issues including education and nuclear power have however come up in the campaign.

“In the end, I think it (coronavirus) will not influence my choice because I think there are other topics which are important as well,” Bridget ten Cate, 40, an employee at the Dutch finance ministry, told AFP.

The vote will be closely watched in Europe, as Mr. Rutte is an influential if not always popular figure in European politics due to his frugal stance on EU spending.

The 2017 elections saw far-right leader Mr. Wilders hoping to ride a wave of Brexit and Trump-inspired populism to victory, but the situation appears different now.

“The current government is rather popular now, at least the Prime Minister is, but then again in time of crisis people tend to rally around the flag,” Mr. Wilders told AFP in an interview.