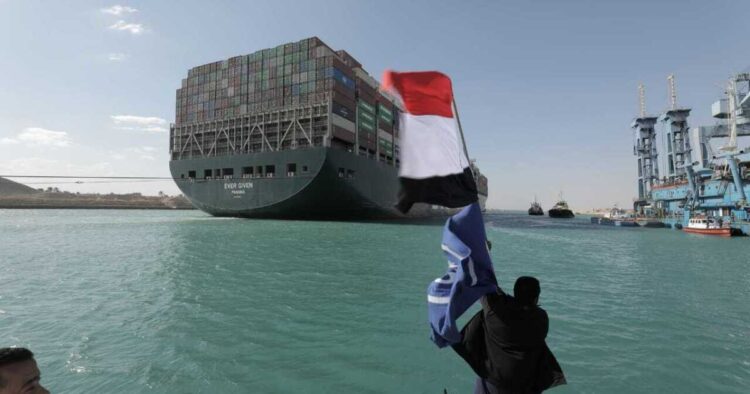 Two months after leading the military in an ouster of the country’s first democratically elected leader, Egyptian President Abdel Fattah Sisi made a pilgrimage to the Suez Canal.

At a grandiose groundbreaking ceremony heavy on patriotism, the former general announced a mega-project that he said would kickstart nothing less than Egypt’s renaissance after the chaos of the Arab Spring: an $8-billion expansion of the 120-mile waterway, which remains one of the most potent symbols of Egyptian national identity.

“We have to move, and move strongly, to get out of the circle poverty we’re in,” Sisi said.

Seven years later, that renaissance is mostly unrealized. Although the country’s gross domestic product is improving, almost one-third of Egypt’s 100 million people live on less than $2 a day, and income inequality has arguably never been higher.

So when Egyptian authorities and international experts earlier this week dislodged the Ever Given, a 200,000-ton transport ship that had blocked the Suez Canal for six days, it meant more than just a reopening of a vital international shipping artery. For Sisi and his government, it was a chance to claim a rare victory and to burnish the credentials of a leader often accused of cronyism and misrule.

Within 24 hours of the Ever Given’s refloating, Sisi was back at the iconic canal once again banging a nationalistic drum and trying to rally his compatriots behind him.

“This was a blessing in disguise,” he said of the crisis. “This incident showed that the Suez Canal is capable, enduring and very, very competitive.”

The Ever Given, a colossus three times the size of the Great Pyramid in Giza, ran aground March 23, its two ends beached on opposite banks, completely sealing off a waterway that handles one-tenth of the world’s shipping. Lt. Gen Osama Rabie, head of the state-run Suez Canal Authority, said the Egyptian government had incurred losses of about $1 billion from the blockage, which caused a traffic jam of hundreds of ships.

The operation to dislodge the ship was a monumental one: More than 10 Olympic-sized pools’ worth of water and mud was shifted by tugboats, dredgers and crews working 24-hour shifts amid intense international scrutiny. High tide gave a crucial assist to heaving the Ever Given off the banks.

“Every Egyptian person living inside or outside Egypt, and whose heart didn’t dance with happiness after the breakthrough in the Suez Crisis, should question themselves, their humanity and their Egyptianness,” artist Mohamed Mohsen tweeted to his nearly 700,000 followers. “Moments like these make us love our country more and more, and they’re the ones who let us know also who hates it.”

Kareem Farid, a software developer, tweeted that the crisis had demonstrated “there are no other choices other than all of us being behind the president. … After seven years of jabbering over the Suez Canal and Sisi’s projects, thank God all have now discovered their importance.”

The outpouring — some of it government-ordered, some of it not — showed “in essence what Egyptian nationalism is all about,” said Hafsa Halawa, an Egyptian British scholar at the Middle East Institute.

“The government thrives on this stuff like fuul and taamiyah,” Halawa added, referring to the extremely popular local version of fava bean dip and falafel.

When an Egyptian crewman of one of the dredgers released a video hours after helping release the Ever Given, it went viral, with people across the country and the world cheering with them.

Much of the public jubilation over the Ever Given’s release was genuine, said one activist and frequent government critic who blogs under the name “The Big Pharaoh” for reasons of safety.

But it has been used by Sisi to distract from the fact that his 2014 wager on expanding the Suez Canal has yet to pay off, the blogger said in an interview. The expansion, which was finished in 2015, was supposed to increase revenues to $13.2 billion by 2023, more than double its pre-2015 levels. Instead, they have remained at roughly $5.7 billion, and dipped to $5.16 billion in 2020 because of the coronavirus.

“We know that the huge grand promises given in 2015 did not materialize,” said the blogger.

Meanwhile, Egyptians’ daily lives have become more difficult since 2016, when Sisi floated the local currency on international markets, cut back subsidies and introduced a value added tax — moves that earned him plaudits from the International Monetary Fund and other foreign financial institutions but beggared many people at home.

“People can’t buy what they used to buy a few years ago. If you ask 10 Egyptians if they’re better off this year than they were 10 years ago, they’ll definitely say no,” the blogger said.

Even ardent anti-Sisi critics acknowledge that he has focused government spending on desperately needed infrastructure refurbishment. But the beneficiaries of that spending have been the military and Sisi cronies, said Timothy Kaldas, a Barcelona-based Egyptian analyst with the Tahrir Institute for Middle East Policy.

The canal, which links the Mediterranean and the Red seas, has long held special importance for Egyptians. By the time it was completed in 1869, it had taken 10 years of backbreaking labor by tens of thousands of Egyptian peasants, many of whom died in the process.

In 1956, then-President Gamal Abdel Nasser, a charismatic leader, nationalized the canal in defiance of Britain and France, provoking a tripartite but failed effort by Egypt’s onetime colonial overseers along with Israel to seize control of the waterway.

Success in this latest Suez crisis comes as Sisi faces other challenges, both foreign and domestic. The same week that the Ever Given got stuck, two trains collided in the central Egyptian province of Sohag, killing some 19 people. As of January, Egypt also had the highest COVID-19 death toll of any Arab nation.

Then there is the brewing fight over the Grand Ethiopian Renaissance Dam, an Ethiopian mega-project on the Nile that both Sudan and Egypt regard as a strategic threat. In his celebratory speech at the Suez Canal, Sisi took advantage of heightened patriotic fervor to issue his sternest warning yet to Ethiopia.

“No one can take a single drop of water from Egypt, and whoever wants to try it, let them try,” he said. “Let no one believe they are beyond the reach of our capabilities.”

Whether any political boost from the freeing of the Ever Given will last remains to be seen.

“This is a moment of pride for Egyptians, that they managed to do something that gained worldwide recognition,” the blogger said. “But there is an important point to note, which is why this specific case is causing all this jubilation. It’s because of the fact that we don’t have successes in Egypt.