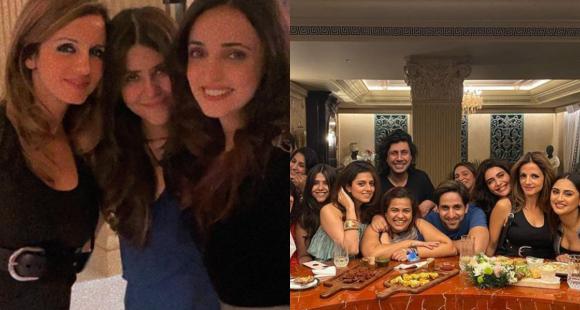 Ekta Kapoor recently hosted a house party at her residence. It was attended by the who’s who of the television and film fraternity.

Television’s Czarina Ekta Kapoor is known for hosting lavish parties at times. Be it celebrating the birthday of her son to hosting Diwali or New Year parties, Ekta makes sure that she brings all her near and dear ones under one roof multiple times. Recently, the TV and film producer hosted another get together at her place and has shared pictures from the same on her social media handle. She was joined by numerous members from the television and film fraternity.

Among those who attended the get-together include Sussanne Khan who looked stunning in an all-black dress embellished with a belt. Apart from that, the divas from the television world like Sanaya Irani, Riddhima Pandit, Krystle D’Souza, Karishma Tanna, and Ridhi Dogra are among others who attended the house party hosted by Ekta at her residence. In one of the pictures, Ekta can be seen posing happily with Sussanne and Sanaya. She looks remarkable in a blue outfit as can be seen in the pictures.

Moreover, the first picture posted by Ekta shows the delicacies which have been prepared for the guests. One can also get a glimpse of the interiors of her plush residence in the same. As soon as Ekta Kapoor shared the pictures on social media, comments started pouring in from numerous fans and other celebs from the showbiz industry. Meanwhile, Ekta Kapoor recently made headlines after she expressed her views on the farmers’ protests on social media. Her reaction came at a time when certain international celebs also highlighted the issue.

Also Read: EXCLUSIVE: Ekta Kapoor on her journey of motherhood: I had a calling for a long time, stored my eggs at 36