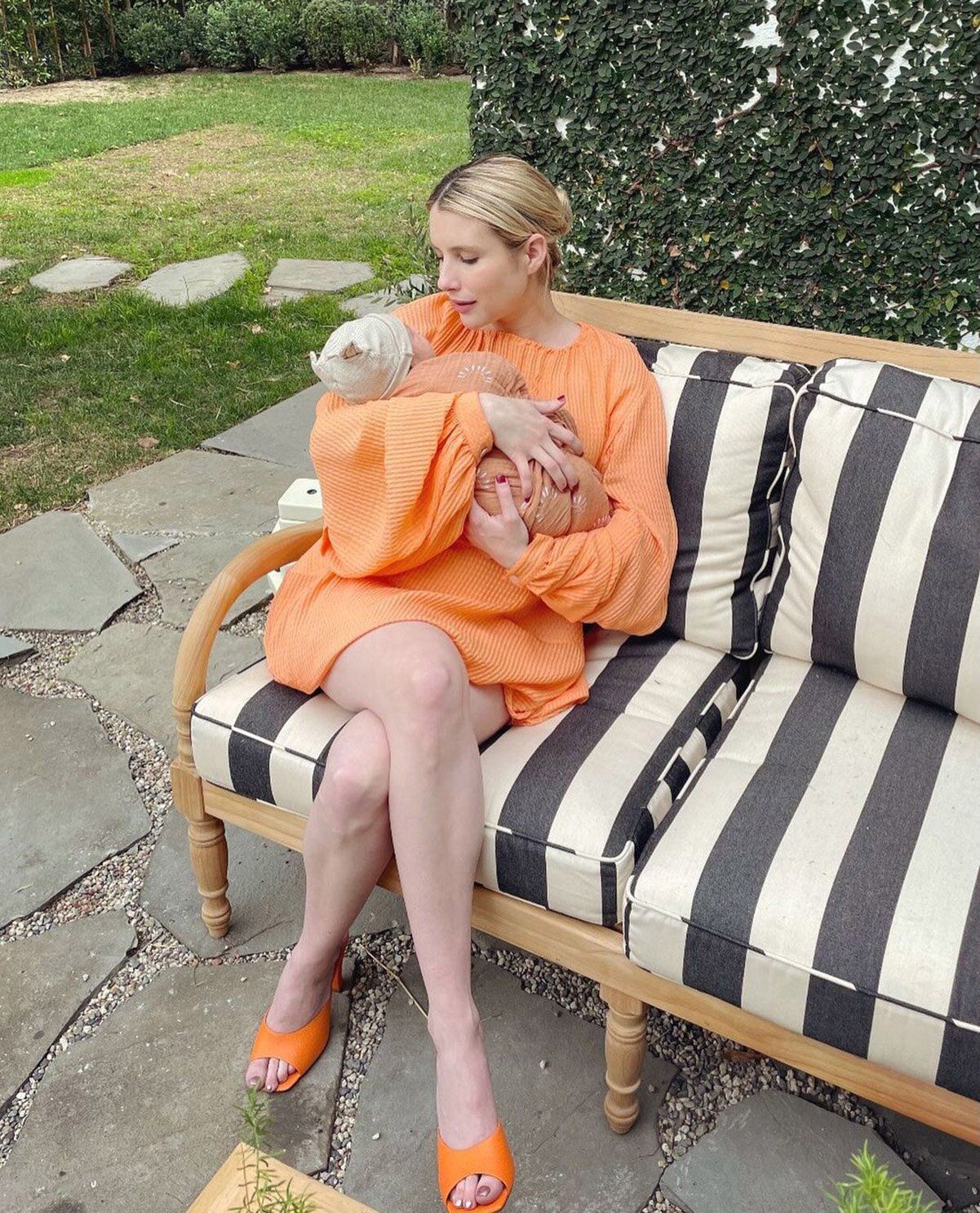 Emma Roberts is one proud mom!

On Tuesday, the American Horror Story star, 29, shared the first photo of her newborn son, whom she welcomed with boyfriend Garrett Hedlund late last year.

“Thank you 2020 for getting one thing right,” she wrote on her Instagram, alongside of a photo of herself holding her baby boy.

In the photo, Roberts wears an orange Stella McCartney dress and matching Andrea Wazen heels as she cradles the infant in her arms.

This is the first child for both Roberts and Hedlund, 36.

Roberts first announced her pregnancy in August when she posted three photos of herself with Hedlund in which she can be seen cradling her baby bump.

“Me…and my two favorite guys,” she captioned the post.

Later that year, Roberts became the first pregnant woman to appear on the cover of Cosmopolitan when she posed for the magazine’s December issue.

“At 16, I thought, ‘By the time I’m 24, I’ll be married with kids,’ ” she said in her cover story. “And then I was 24 and I was like, ‘Remember when I said I would be married with kids by now?’ … It sounds cheesy, but the moment that I stopped thinking about it, we got pregnant.”

RELATED: Emma Roberts Says Her Mom Accidentally Revealed Her Pregnancy on Instagram: ‘It Was a Disaster’

According to the Holidate actress, she faced issues surrounding her ability to get pregnant after learning she had undiagnosed endometriosis a few years back.

“I was told, ‘You should probably freeze your eggs or look into other options,’ ” she recalled a doctor telling her.

A source recently told PEOPLE that Hedlund has “stepped it up” to support the new mom in the wake of their child’s arrival.

The actress gave birth on Sunday, Dec. 27 in Los Angeles

“Having a newborn in the pandemic has been a lot harder than either of them expected, but they’re really, really trying their best to figure things out,” the source said. “Garrett totally stepped it up after Emma was still recovering after giving birth. He made sure that their house was stocked with things that Emma liked and needed so she felt comfortable. She’s just starting to get back into a more ‘normal’ routine.”

The source added that Roberts held off on announcing the birth of her son right away out of caution during the ongoing pandemic.

“They kept the baby’s arrival to themselves because they’re taking the pandemic very seriously. They of course want to share this time in their lives with friends and family, but they wanted to avoid having people stopping by and visiting to be safe,” the source said.