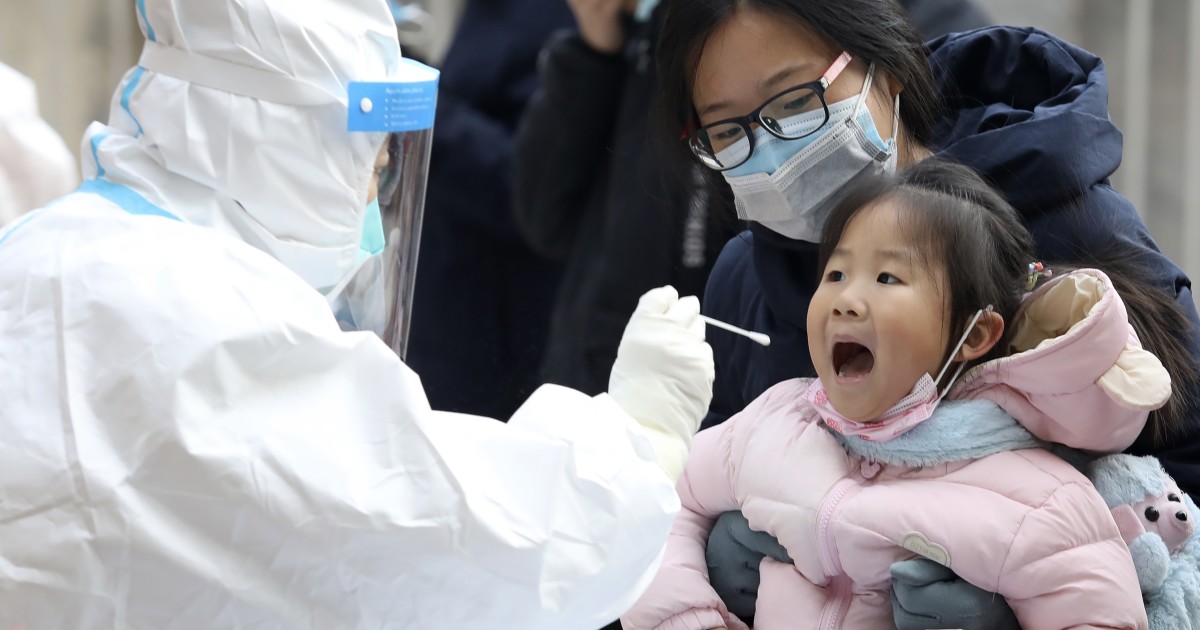 Zhao Renmi awakened to the sound of village officials shouting that everyone had to pack and go, without explanation of where or for how long. Word was spreading of a new COVID-19 outbreak, so she gathered her children and obeyed.

“My heart is really troubled. It’s hard to bear,” said Zhao, a woman with close-cropped hair who lives in rural Hebei, in a video posted this week on Douyin, the Chinese version of TikTok. She was one of about 20,000 residents being evacuated from 12 nearby villages, according to local reports and health officials, as part of China’s crackdown on its largest coronavirus outbreak in months.

More than 500 new cases have been found since Jan. 2 in Hebei, the industrial province surrounding Beijing, sparking a “wartime mode” response from Chinese authorities fearful of the virus spreading before the upcoming Spring Festival, when hundreds of millions of Chinese crisscross the country to go home each year.

The jump in infections comes as a World Health Organization mission investigating the origins of the pandemic is expected to arrive Thursday. An embarrassing glitch occurred last week when Beijing announced on the day several members of the team had already begun their journeys to China that their visas were not approved, prompting a delay — and frustration from WHO Director-General Tedros Adhanom Ghebreyesus.

China has been sensitive to criticism by the U.S. and other countries that it did not do enough to prevent the virus from spreading beyond its borders one year ago. It is unclear what access the WHO team will have in assessing the genesis of the pandemic. Most medical experts believe it was transmitted by an animal in a food market in Wuhan, but others suggest it may have originated in a laboratory.

Dr. Dale Fisher, an infectious diseases specialist based in Singapore and member of an earlier WHO mission to China, told Reuters on Tuesday that expectations were “very low” the medical team would come away with significant answers.

About 18 million residents of Hebei’s capital, Shijiazhuang, and the nearby city of Xingtai have been forbidden to leave, with public transportation halted, mass testing underway and stay-at-home orders enforced in the strictest lockdown since Wuhan was sequestered in early 2020.

In the rural areas around Shijiazhuang where many of the cases in the most recent outbreak were found, villagers have been evacuated. On Douyin, users posted videos of villagers bundled up in winter coats with suitcases, plastic sacks and children in tow, lining up to board red buses headed for quarantine.

Zhao swiveled her camera to show a packed backpack, two fertilizer sacks full of clothes and her children’s things, and steamed buns to eat on the way. “I don’t understand. I feel like a refugee,” she said. “But I guess we obey the nation’s arrangements. If they want us to move, we move.”

Such acceptance of government orders has helped China contain the pandemic and restart its economy far ahead of much of the world. Despite accusations that authorities undercounted cases and mismanaged last year’s initial outbreak, the state’s sweeping restrictions and granular control since then have kept total case counts below 98,000, with 4,793 deaths, as reported by Johns Hopkins University.

The latest outbreak has left one dead, the first such fatality since May 17. Previous “wartime mode” reactions to tiny outbreaks through 2020 have quickly controlled the virus and allowed a swift return to work, school, travel and social gatherings.

Yet that same insistence on control has obstructed research into the pandemic’s origins and silenced Chinese voices that challenge the government’s positive narrative. In late December, a former lawyer named Zhang Zhan was sentenced to four years in prison for recording videos in Wuhan of overcrowded hospitals, fearful residents and her own questions about government suppression of whistleblowers.

Zhang is one of at least four Chinese video bloggers, including another lawyer and a former CCTV host, who disappeared from Wuhan while posting on-the-ground videos last year.

Lu Qiang, party secretary of Xiaoguozhuang village, one of the first places where the outbreak began in Shijiazhuang, told Chinese business news outlet Yicai that it had taken about 10 days to evacuate all 4,000 villagers. It wasn’t easy to convince the villagers, Lu said in the report, which was removed from the internet a few hours after it was published Tuesday.

Many villagers had questioned why they should move if quarantine sites were not prepared. Why move the whole village instead of just positive cases? Why couldn’t they quarantine at home? Lu had spent a morning speaking into the village broadcast system, he said, telling them: “If we leave, we’ll feel better and so will others. This is the right thing to do.”

The operation was haphazard and quarantine conditions undesirable, though they eventually improved, a Xiaoguozhuang villager said in the report. Big buses moved villagers in groups of 50 to 60 to quarantine sites where there were often no blankets or pillows.

At least one bus had left its passengers on board overnight because no quarantine spots were available. The bus door remained open despite the 1.5-degree temperature, out of fear that turning on the heat would increase virus transmission, the report said.

Similar complaints were raised online about a school used for quarantine in Xingtai. People taken there for quarantine posted videos on the social media platform Weibo of soiled bathrooms and dormitories and photos of people crowding to get water, complaining that there was no social distancing or hygiene.

“This isn’t quarantine, this is concentration,” one user wrote. Students meanwhile protested that they had not been informed their dormitories would be requisitioned and that their personal items were still inside.

Xingtai authorities released a statement acknowledging the quarantine shortcomings and promising improvements. Some of the Weibo posts were then deleted.

Contact tracing data released by authorities showed that many of the initial Hebei cases were linked to village weddings, including one in a hotel across from Shijiazhuang airport. Some villagers in Xiaoguozhuang also reportedly worked as janitors or luggage handlers at that airport, one of the designated entry ports for international travelers.

Authorities said there was no link between the Hebei outbreak and a more infectious strain of the coronavirus from the United Kingdom. But new strains similar to ones found in the U.K. and South Africa have been discovered in several other provinces.

Four additional Hebei cities and counties announced seven-day stay-at-home orders on Tuesday. A county in the northeastern province of Heilongjiang was also locked down Tuesday because of 20 asymptomatic cases. Some districts in Beijing have been subject to movement restrictions as well.

Kevin Meng, an apartment rental agent who works in Beijing but lives on the city’s outskirts in Hebei, said he had been blocked in recent days from entering Beijing despite having tested negative for the virus.

Meng, 33, said he’d been stopped at a checkpoint because he is registered as a resident of Xingtai, though he had not visited recently. Authorities consider Xingtai an outbreak hot spot because 26 locally transmitted cases have been found there this month.

Meng’s parents were locked down in their village in Xingtai, he said, unable to go outside their homes while the village leaders marched around shouting at anyone who ventured outside. “It’s basically the same as last year,” he said.

A Shijiazhuang high schooler, Zizy Li, told The Times that she was locked down on her campus. The heat wasn’t working well, and only three teachers were with her and other students. The students had no cellphones and lived on a rigid schedule, rising at 6 a.m., going to bed at 10:30 p.m., and studying every day with no weekends.

“The government gave notice that no one can move for unnecessary reasons. Even if your family member dies you can’t move,” Li said. Some students were crying, homesick, expecting they’d be locked down at least two weeks and possibly past the Spring Festival. But Li said she was fine, aside from stress about an upcoming major exam that she’d have to take in quarantine.

Lucy Qin, 38, an insurance agent living in Shijiazhuang’s Chang’an district, said lockdown conditions varied among residential compounds. Some people were not allowed to leave their buildings, but she was able to walk within the gated community. There had been a rush to buy groceries and some anxiety about shortage, she said, but by the fourth day of lockdown, they’d gotten all they needed.

“I’m feeling calm,” she said. “I think this should be within the government’s control.”

Ziyu Yang of The Times’ Beijing bureau contributed to this report.