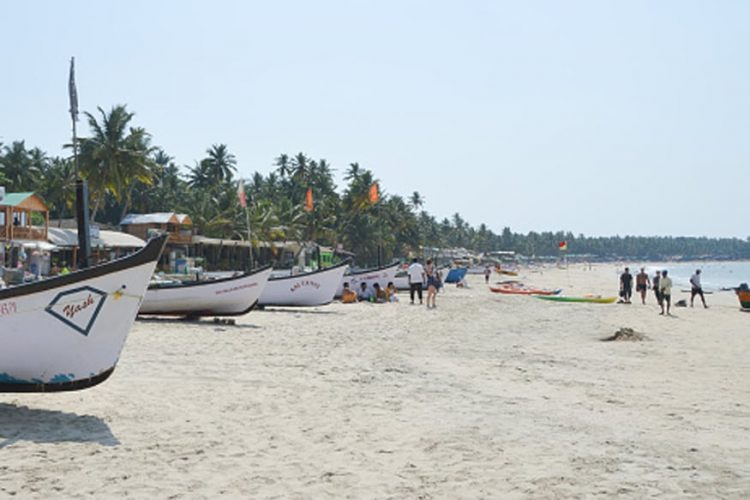 Coronavirus cast a long shadow over tourism in Goa as the coastal state normally bustling with domestic and foreign tourists tried to cope with effects of the pandemic. Goa witnessed perhaps the worst tourist season with international chartered flights cancelled, beach shacks wearing empty looks and local businesses like taxi and bike rentals, dependent on this industry, suffering a body blow.

-induced has cost the state’s tourism industry Rs 1,000 crore in earnings, Goa Chamber of Commerce and Industry said. A report by the state tourism department and a private consultancy firm said Goa’s tourism industry may have suffered loss of between Rs 2,000 to Rs 7,200 crore and job losses in the range of 35 per cent to 58 per cent due to the pandemic.

The annual Feast of St. Francis Xavier, a ceremony which used to attract thousands of people each year, was organised in a muted way in Old Goa in December, as public gatherings were not allowed in view of the pandemic, which has claimed over 700 lives since March. While people formed long queues in the morning outside the campus of the Basilica of Bom Jesus, measures were taken to ensure there was no crowding at the place, and the event was telecast live online as well, said a priest.

The Basilica of Bom Jesus is the area where the relics of the 16th century Spanish saint are preserved. A team from the Archaeological Survey of India is undertaking restoration work on the four-century-old casket containing the remains of St Francis Xavier, church officials said. Consumption of liquor in public was not allowed during the famous Goa Carnival float parades organised by the state tourism department in February, days before the countrywide lockdown was announced.

Chief Minister Pramod Sawant spoke of huge job losses due to the pandemic situation. The state government has offered 10,000 jobs in its departments in early 2021.

In the recently-concluded zilla panchayat polls, BJP won 19 of the 25 seats in North Goa and 14 of the 24 seats of the South Goa zilla panchayat, with election to one seat being countermanded following the death of a Congress candidate. A candidate of the Arvind Kejriwal-led Aam Admi Party won a zilla panchayat seat, boosting his party’s bid to make space for itself in the coastal state.

Three infrastructure projects – the expansion of a railway track and highway, and a new power line – came in for flak from residents believing they will harm Goa’s pristine forests and pollute its picturesque towns with coal dust. The projects cut through the Mollem National Park and the Bhagwan Mahavir Sanctuary, a biodiversity hotspot.

Projects involving widening of National Highway 4A connecting Goa and Karnataka and the double-tracking of a railway line from Mormugao to Karnataka are meant to carry increased coal imports. This year’s monsoon was the wettest since 1961 for Goa, the Indian Meteorological Department (IMD) said.

The state witnessed 412 cm rainfall from the south west monsoons in 2020, which is 41 per cent higher than the normal value of rainfall in the state. The highest seasonal rainfall previously recorded was 408 cm in 1961. Following protests by students unions, Goa University postponed the offline examination of final year students. This was after students unions held protests demanding postponement of the examination and holding them online.

The 51st edition of the International Film Festival of India (IFFI), scheduled to be held in Goa from November 20-28, was postponed to January next year and will be held in a hybrid format that will be both virtual and physical. Information and Broadcasting Ministry officials said the decision was taken keeping in mind the COVID-19

The military standoff between India and China in Ladakh this year led to Goa government considering dropping a Chinese consultancy firm from its team building Rs 1,400 crore eight-lane bridge across the Zuari river in South Goa, thereby delaying the construction work. Earlier this year, the Supreme Court cleared the decks for an international airport in Goa at Mopa, 43 km from state capital Panaji, by lifting the suspension of environmental clearance on its construction. The order came on a petition filed by environmentalists who had challenged the airports construction, citing threat to green cover.