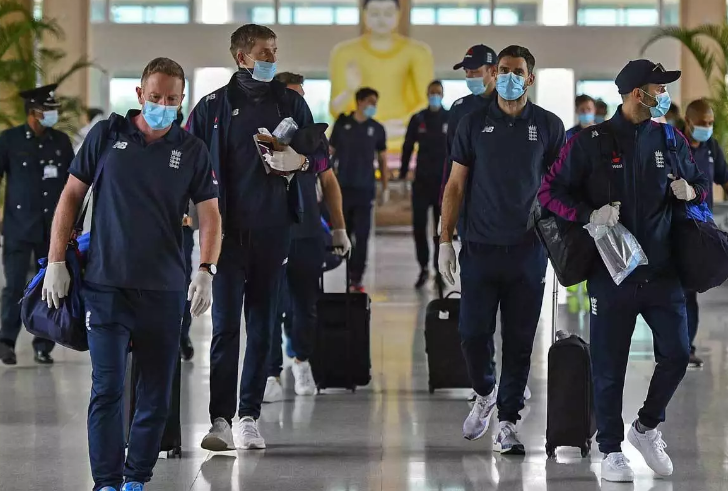 England cricketers led by skipper Joe Root reached Chennai on Wednesday for the first two Tests against India. Root and Co reached the city around 10.30 am as per reports in PTI. Some support staff from the Indian cricket team also reached the city in the morning as per reports. Both the Indian team and the England cricket team will be put up in the same hotel and will be a part of the same bio-bubble as well.

The players of the two teams will be staying at Hotel Leela Palace in a bio-bubble as part of quarantine protocols and will undergo testing for COVID-19, the TNCA official said.

The official Twitter handle of the England Cricket team posted a video of the arrival of their cricketers checking into the Leela Palace. Meanwhile, England all-rounder Ben Stokes and Jofra Archer have already reached Chennai and are undergoing their mandatory quarantine period.

📍 Chennai, India@root66 and the team have arrived in India ahead of our four-match Test series 🇮🇳🏴󠁧󠁢󠁥󠁮󠁧󠁿 pic.twitter.com/GT06p9Ru4u

A few Indian players including star batsman Rohit Sharma and Test vice-captain Ajinkya Rahane arrived on Tuesday night, some others like Cheteshwar Pujara, Jasprit Bumrah and Rishabh Pant, reached on Wednesday morning. Skipper Virat Kohli is scheduled to arrive later on Wednesday. Team coach Ravi Shastri flew in from Mumbai as did several other players from destinations across the country.

Jonny Bairstow’s exclusion from the England squad for the first two Tests has created quite an uproar in the English media circles. Former England captains, Michael Vaughan and Kevin Pietersen have reacted strongly to the same as well.

England are heading into the series after clean sweeping Sri Lanka in the two-Test match series at Galle. They are fourth on the World test Championship points table. In their last tour to India in 2016-17, they lost the Test series 4-0 to Virat Kohli’s men.