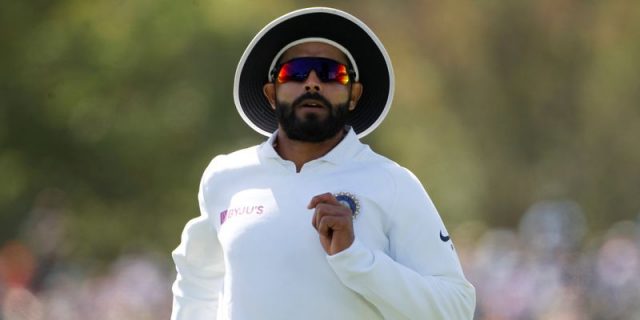 Indian all-rounder Ravindra Jadeja will miss the four-Test match series against England with a broken thumb. He got injured in the third Test match against Australia in Melbourne and since then has been out of cricketing action. He is under rehabilitation at the NCA in Bengaluru after having successfully gone through surgery on his left thumb. Meanwhile, former England batsmen Mark Butcher, who will be a part of the commentary team in the upcoming series said the absence of Jadeja will come as happy news for the England batters who faced problems against facing the Sri Lankan left-arm spinner Lasith Embuldeniya.

The Sri Lankan left-arm spinner took 10 wickets in the second Test match at Galle. Seeing the England batsmen and especially the openers having troubles facing him, Butcher said that the absence of Jadeja will be a big respite.

England Will Be Buoyed by Ravindra Jadeja’s Absence: Mark Butcher

“Our batters had problems facing Embuldeniya. England will be buoyed by Jadeja’s absence. India possesses a world-class bowling attack but Jadeja adds a different dimension to it.”

“A left-right combination is handy and England will want to stick with them. If the two get off to a good start, the rest of the batsmen too will gain confidence,” Butcher said.

Burns, speedster Jofra Archer and all-rounder Ben Stokes arrived earlier in India after being rested for the series in Sri Lanka.

Meanwhile, Kuldeep Yadav is expected to partner Ravichandran Ashwin with Jadeja ruled out of the series. Indian bowling coach said that the England series will be Kuldeep’s opportunity to bowl with Jadeja missing the series. The Indian all-rounder has 45 wickets in 11 matches against England.

England Will Be Buoyed By Ravindra Jadeja's Absence: Mark Butcher