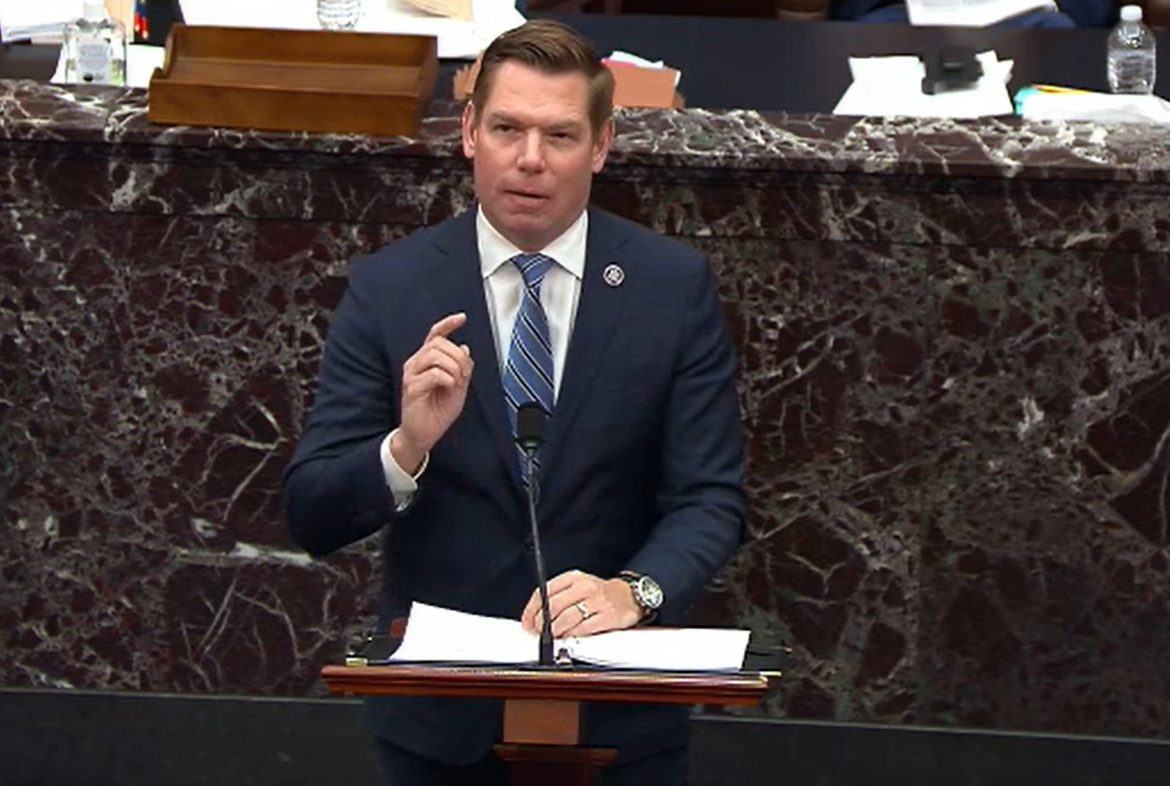 On Wednesday, Greene confronted Ocasio-Cortez outside the lower chamber in the latest hostile encounter between the two congresswomen, according to the Washington Post. During the incident, Greene was heard saying “Hey Alexandria” twice, before loudly calling Black Lives Matter and Antifa “terrorist” organizations. She reportedly also called the progressive lawmaker a “radical socialist” who doesn’t “care about the American people.”

In an appearance on CNN earlier today, Swalwell told host Jim Acosta, “I was a prosecutor. I’ve convicted people for less on stalking charges. I mean she is following Ms. Ocasio-Cortez around for years, trying to engage with her. She just needs to let it go. She’s just not that into you Marjorie Taylor Greene. I’m sorry.”

Newsweek reached out to Marjorie Taylor Greene’s office for comment. This story will be updated with any response.

Ocasio-Cortez walked away as she was berated by Greene on Wednesday, prompting Greene to call her a “coward” and “chicken” to reporters nearby.

In a video of the incident shared to Greene’s Facebook live, Greene can be heard urging Ocasio-Cortez to “get rid of your diaper,” and calling her “Crazy eyes. Crazy eyes. Nutty. Cortez.” CNN reposted the clip to YouTube after it was deleted on the platform.

Pelosi criticized Greene over the incident in a press conference on Thursday, calling it “verbal assault and abuse of our colleague.” The House Speaker also suggested that the Ethics Committee should investigate Greene for causing “trauma and fear among members.”

“It’s so beyond the pale of anything that is in keeping with bringing honour to the House,” she said. “This is beneath the dignity of a person serving in Congress.”

Ocasio-Cortez, a former bartender, compared Greene’s “intimation” to the “kinds of people that I threw out of bars all the time” on Thursday.

“I refuse to allow young women, people of colour, people who are standing up for what they believe, to see this kind of intimidation attempts by a person who supports white supremacists in our nation’s capital,” she said.

Greene later fired back at Ocasio-Cortez and defended her actions. “She throws out paying customers, is what she’s saying?” the Republican said. “I was telling her, you need to debate me, you need to defend your policy. There is nothing wrong with that.”

The incident came just weeks after Greene confronted Ocasio-Cortez over the Green New Deal in Congress. “When I saw her in the Capitol just the other day, she was in the chamber, so I went down and was like, ‘Hey, I’m Marjorie Taylor Greene. I’d like to challenge you to a debate on the Green New Deal,'” Greene said at an America First Rally in Florida last month. “Needless to say, she was like, ‘Oh, like have you even read it?'”

Sharmila slams Telangana CM over 'lack of development' in Medak